Sabah Province in Malaysian Borneo is a spectacular province where you can explore 400 million year old rainforest and some of the richest reefs on the planet on the same day! 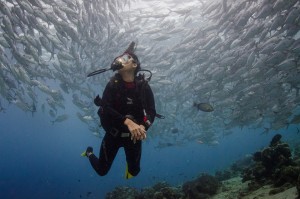 When I first began dating a birder, I noticed a trend. Many, it turned out, only dated and married each other. After a while, this case of sexual selection began to make sense to me, as most birders require travel companions with an incredible amount of patience for staring into the tree canopy. I have never been a birder, and I eventually came to grips with the fact that most outdoor activities — hiking, for example — would forever take second place to avian pursuits. For the arrangement to work, it became clear that traveling together would necessitate breaks between periods of birding. One of these breaks, Jessie and I discovered this summer, was jumping into the ocean with some scuba gear.

Tropical birding and scuba diving both entail observation of colorful animals in the world’s most biodiverse ecosystems: the tropical rain forest on land, the coral reef in the sea. The means of observation, however, could not be more different.

The former requires hiking for hours in saunalike heat for brief glimpses of rare species. The latter, on the other hand, stresses weightlessness — neutral buoyancy — in warm, comfortable water, with schools of fish swimming all around you. There are required breaks to avoid decompression sickness, and the less effort (and therefore oxygen) you use, the better recreational diver you are said to be. Tropical birding provides a stark contrast again here: The better tropical birder you are, the more willing (and sometimes even excited) you should be by the prospect of enduring physical misery, subjecting yourself to periods of heat, humiliation and exhaustion in pursuit of an elusive sighting. They are different kinds of searches, with different kinds of payoffs.

A few tropical hot spots in the world provide this kind of marine and terrestrial combination. Since we live in Beijing, Southeast Asia was the obvious option. The Indonesian archipelago, in particular, is a paradise for such travel, and we eventually settled on Sabah, a province in the Malaysian half of Borneo known for its national parks both on land and in the water.

The Danum Valley, one of Borneo’s most famous lowland rain forests, lies just a five-to-six-hour drive from Semporna, a fishing town and dive mecca in the Coral Triangle that features many coral reefs, most notably the one at Sipadan Island. On the west coast of Sabah lies another pair of marine and terrestrial animal havens: Kota Kinabalu and Kinabalu Park, home to one of Southeast Asia’s highest peaks and a wide variety of endemic animal species. The Kinabatangan River winds in between the two coasts, which planes can traverse in an hour. Given a few weeks, it’s possible to visit each site and obtain basic dive certification with some of the most affordable prices in the world. Travelers must only decide which world to visit first— the jungle or the ocean?

We chose the ocean, enrolling in a standard three-day course with Scuba Junkie, one of the larger outfits in Borneo. Our instructor, Rachel, was patient and enthusiastic, and was unexpectedly joined by juvenile yellow trevally fish, each about the length of a lemon, on a few training dives. While the three-day course can be tiring at times — clearing masks of water, swimming blindly or managing air failure— training dives off Mabul Island provide glimpses of what’s to come. On one simple training dive, we swam by a green sea turtle on top of a wreck, a group of juvenile spotted eagle rays and a crocodile fish, all while the trevally continued to swim beneath Rachel. 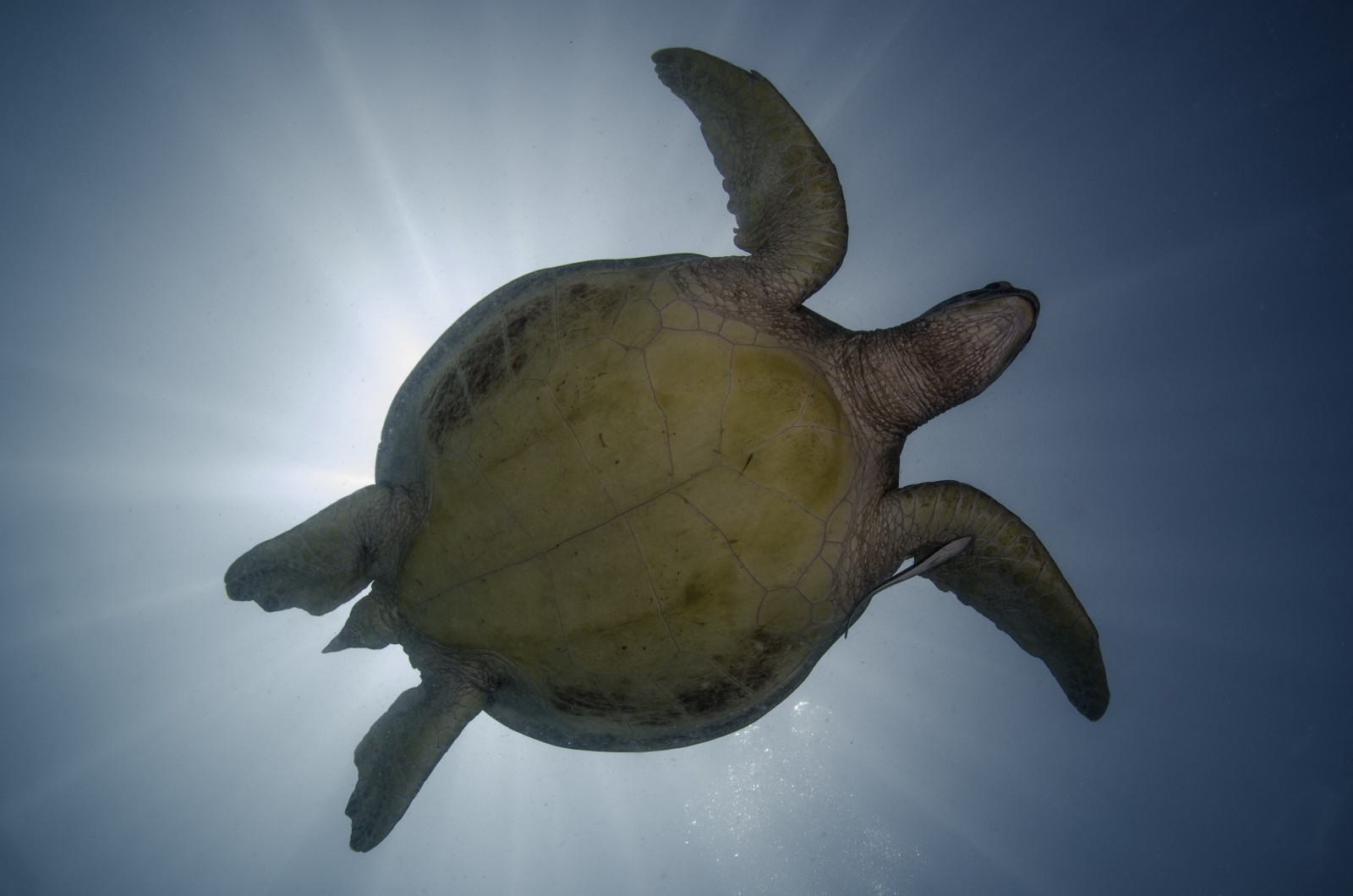 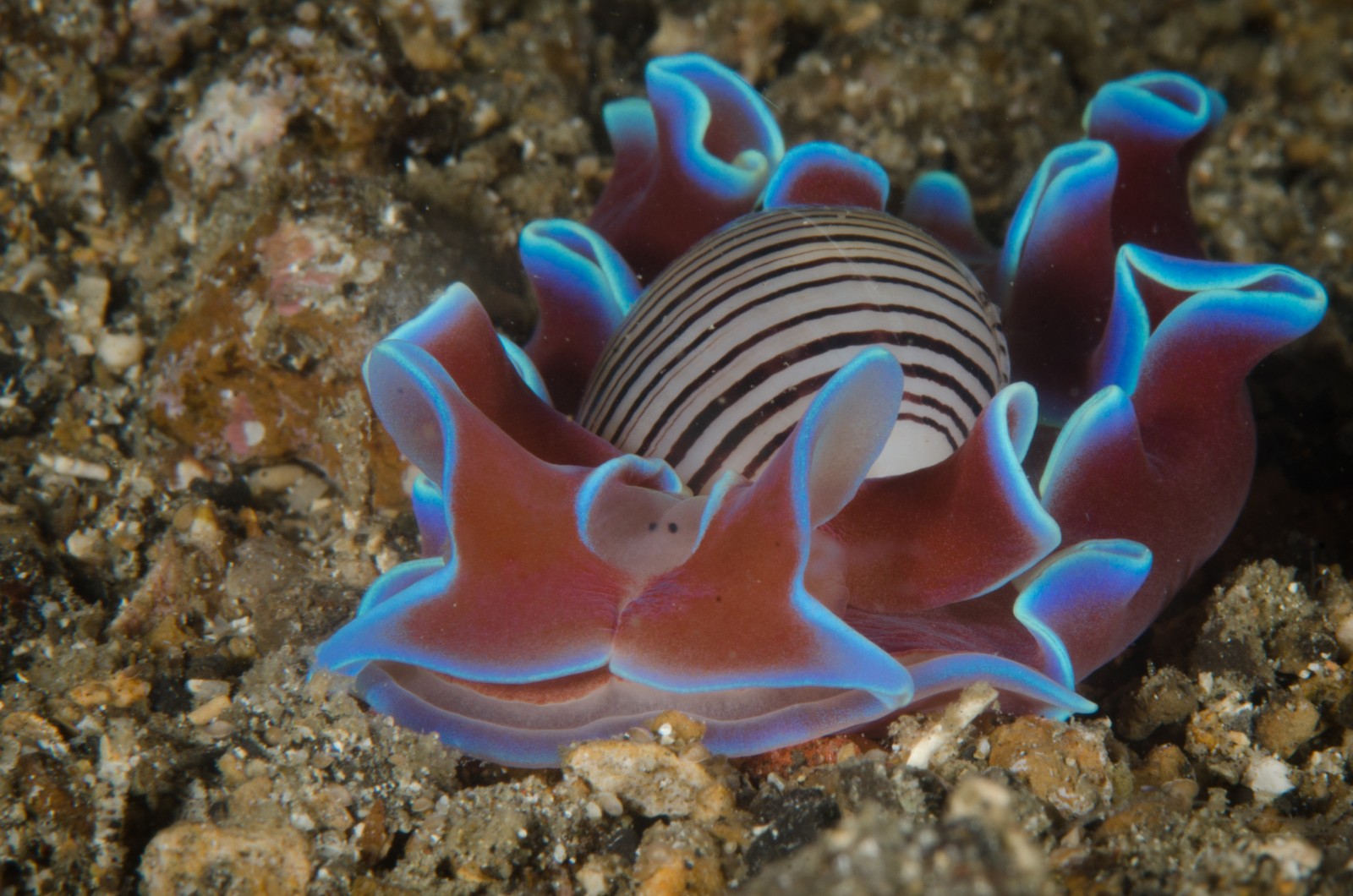 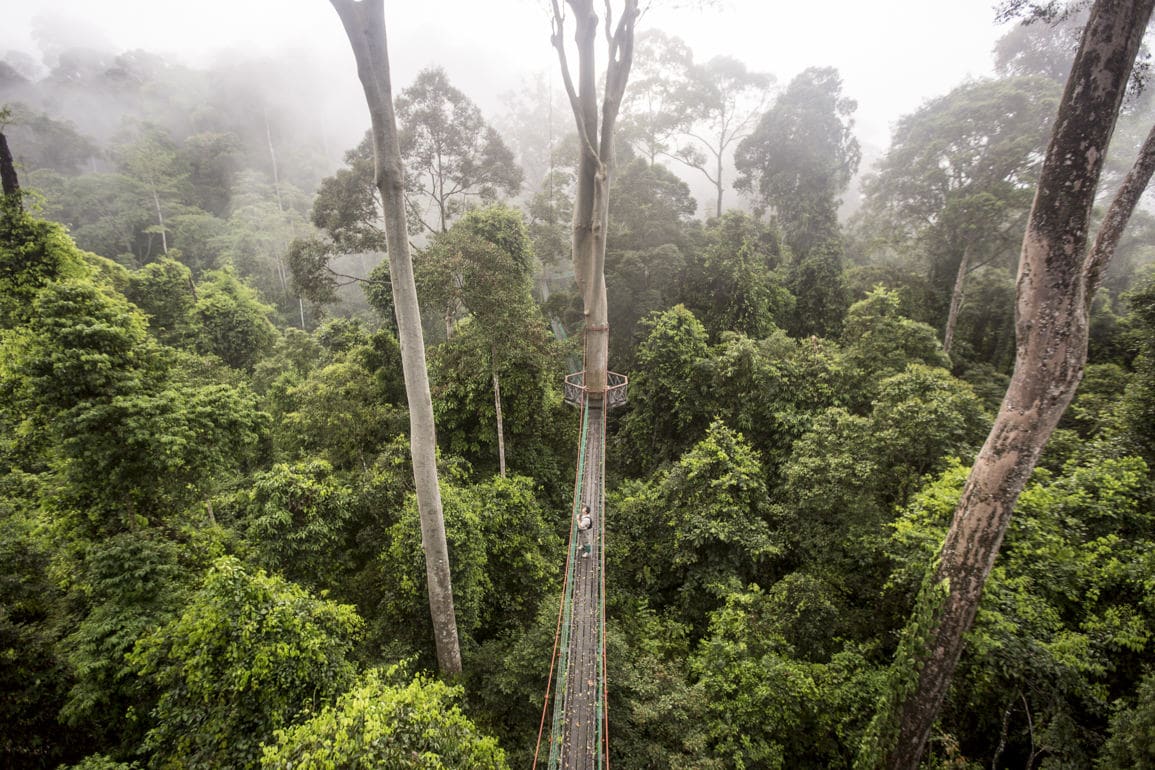 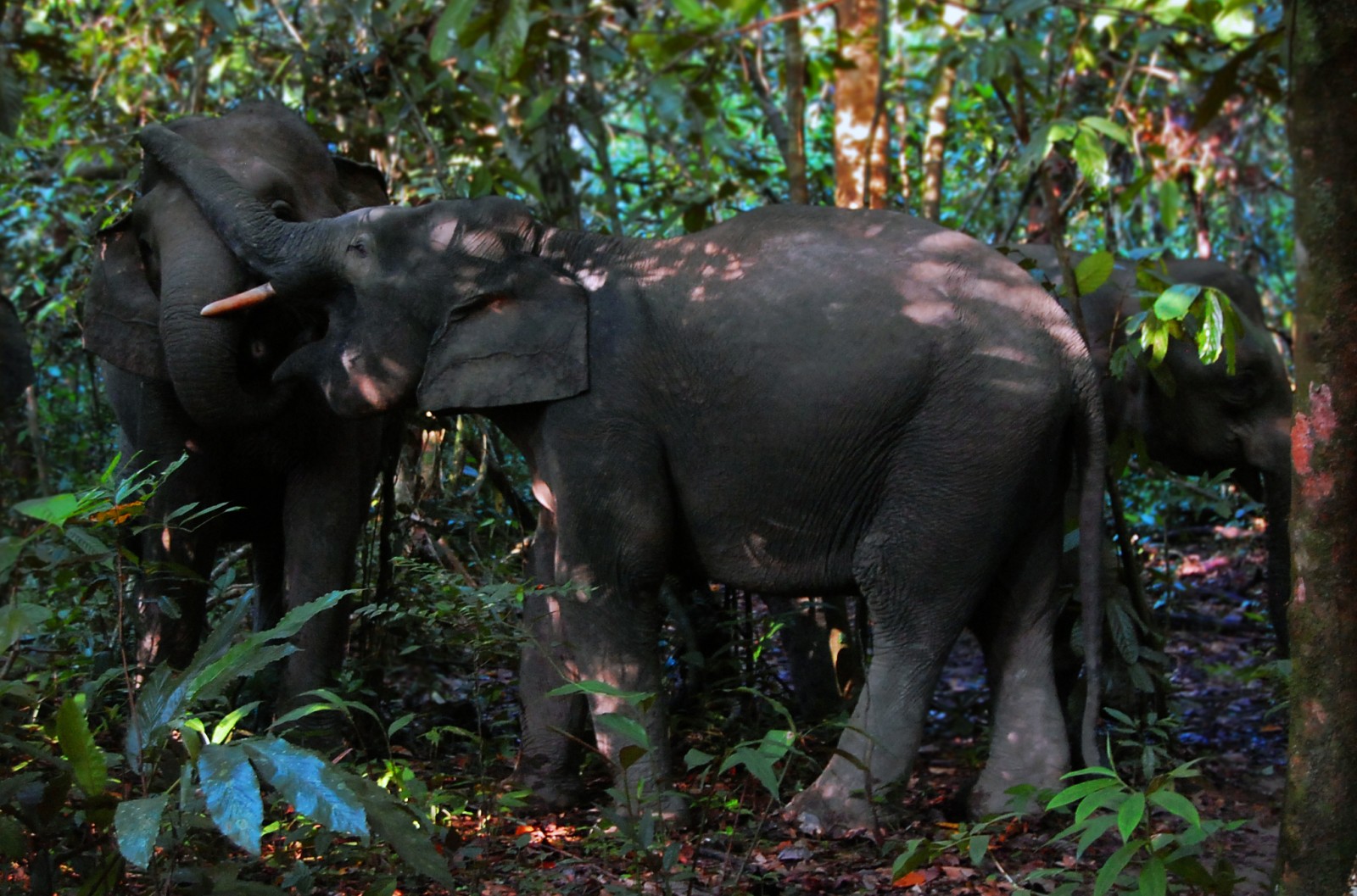 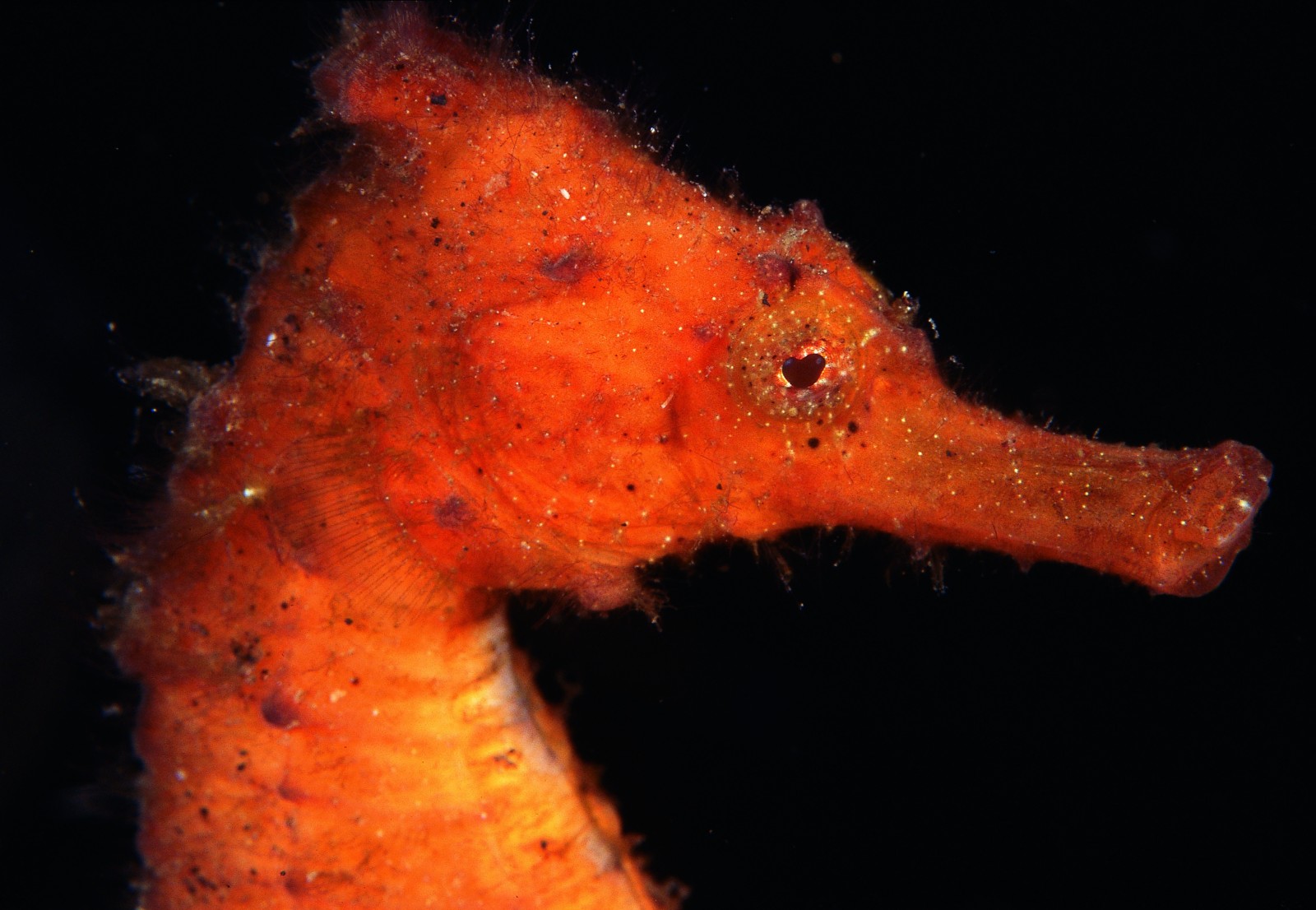 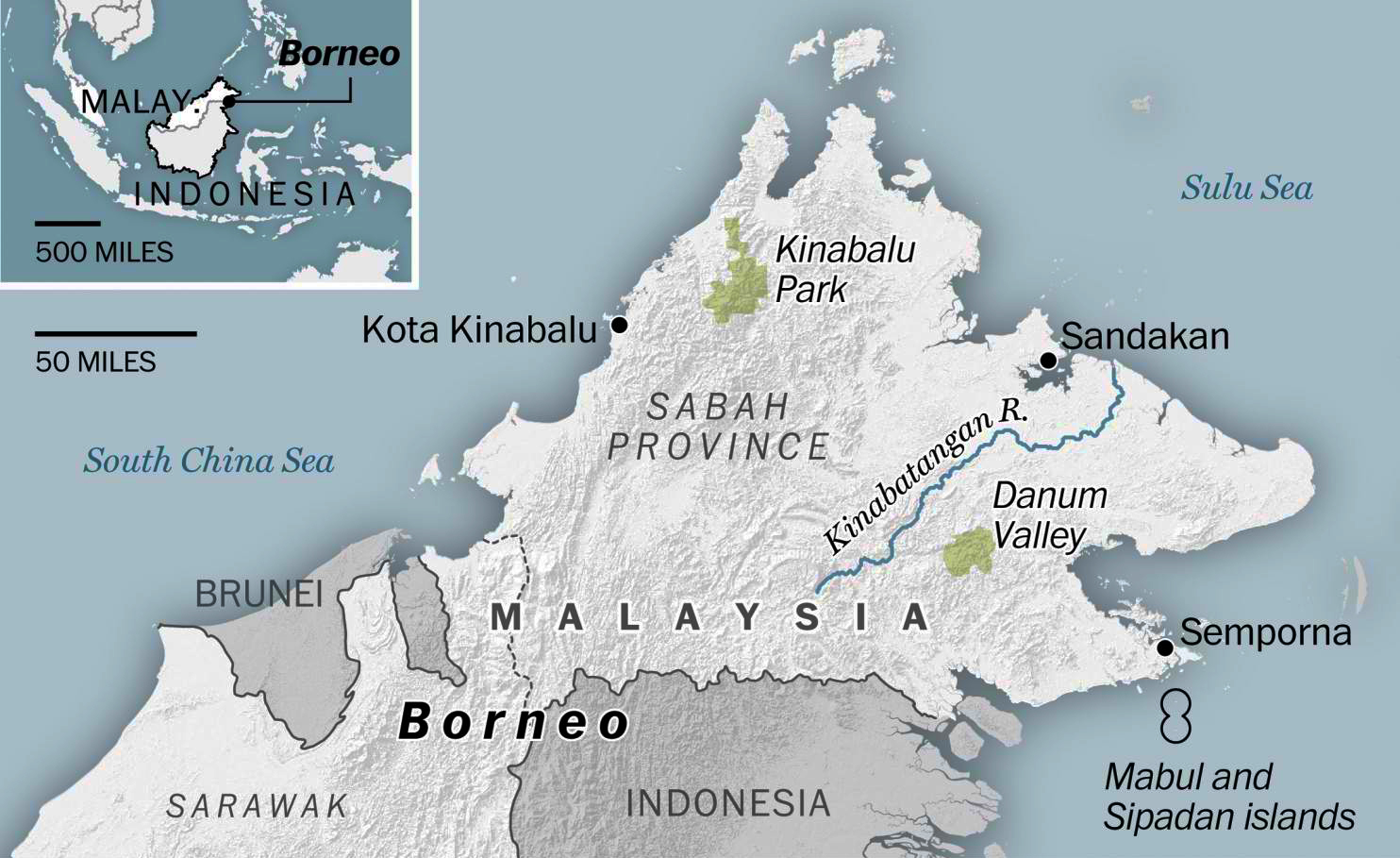 The Coral Triangle, an area of tropical seas surrounding Indonesia, Malaysia, Papua New Guinea and the Philippines, is one of the most biodiverse marine areas on the planet. With more than 600 species of coral and 2,000 species of reef fish alone, diving felt like floating through a living jewelry shop.

Diving around Mabul was rather like trying chocolate for the first time — in Belgium. The most challenging part of the experience came during coffee and tea breaks, when I struggled to identify all that we had seen.

Jessie took to the exercise quickly, transforming her bird-watcher’s eye to a diver’s. In just two days of underwater training and two days of full diving, our list continued to grow, from sea turtles to frogfish and all sizes in between. And that was without ever making it to the permit-limited Sipadan, a 2,000-foot coral tower in open sea where hammerheads and barracudas school and where whale sharks are not an uncommon sight. At some point, I gave up trying to identify the fish and just floated with the current.

We returned to land by flying to Kota Kinabalu, gazing at the land below, overwhelmed by palm-oil plantations. Featured in documentaries such as the BBC’s “Planet Earth,” Borneo is famous for its rain forests and coral reefs, but its national parks are more akin to islands floating in a sea of monoculture that dominates the landscape and much of the Malaysian economy. A picture of the oil palm graces the Malaysian 50 ringgit bill.

Driving from Kota Kinabalu to Kinabalu Park took less than two hours, and we arrived in mist to the only cold weather we experienced in Borneo. The skies eventually cleared, revealing the high- elevation rock faces of Mount Kinabalu, shooting up from the jungle. The next few days were spent catching glimpses of birds endemic to the mountains as well as a spectacular blood-red sunset. Of Borneo’s 52 endemic bird species, 37 are found only in the island’s mountain areas. I spotted my first on the ground: a family of red-breasted hill partridges foraging in the dirt, extending my layman’s streak of sighting jungle fowl. While I traversed the wide range of trails at Kinabalu, Jessie moved slowly, catching birds in her binocular lenses.

We returned to the lowlands after a few days, flying to Sandakan and then journeying on to the Kinabatangan River, home to monkeys, elephants and crocodiles. There had been reports of a herd of rare Bornean pygmy elephants, of which there are only about 200 left in the area, moving upriver. On our first day, we got lucky: a group of five emerged from the forest, bathing and roughhousing in the water.

The next day, 27 elephants emerged, chomping down on elephant grass at the water’s edge. As we sped down the river, leaf monkeys, hornbills, serpent eagles and troupes of proboscis monkeys lounged in trees by the riverside, their long noses visible from the boat. In late afternoon, thunderstorms pounded the water and relieved the afternoon heat. Dusk emerged into crisp skies, and the river canopy lit up in deep, spotlighted green. Our first night walk revealed a variety of insects; on our second, a Western tarsier — an ancient, miniature primate about the size of a clenched fist — fled our headlamps, hopping between tree trunks near the forest floor.

On our way into Danum Valley, our final stop, we shared a van with two Spaniards, Carla and Alex. It was a fortuitous meeting: Like me, Carla was a fair-weather birder accompanying an avian fanatic. When heat and humidity outweighed our dedication for spotting wildlife, Carla and I retreated to reading on the lodge deck while Alex and Jessie pushed on.

This went on for days, with Alex and Jessie spotting a wide range of birds while Carla and I tagged along intermittently. Dinner on the field station patio — a comfy assortment of lounge chairs and tables — quickly became an exercise in comparing notes with other guests. Two Texans, Amy and Jay Packer, joined the four of us at dinner each night to discuss the day’s sightings. Over the next few days, birding around the lodge became a team effort among Amy, Jay, Jessie, and Alex. When a helmeted hornbill was spotted in the fig tree near the lodge, birders fetched deck loungers with the enthusiasm of kindergartners who had glimpsed an ice cream truck.

On the other hand, non-sightings drew despair. Bird watchers and animal seekers tend to have a few dream species; for Alex, that meant orangutans and Borneo’s endemic pittas — small, elegant, colorful birds that scavenge for insects and leeches on the forest floor. The pittas proved elusive, and Alex grew dark at times. “I hate the pitta,” he muttered at dinner one night, with the air of a spurned lover. At one point, he compared Danum’s birding to the Vietnam War: In the hot, dark jungle, he could hear the birds everywhere — but though they could see him, he couldn’t see them. When the Texans lent me an extra pair of binoculars, Jay told me that after he and Amy were married, the gift of binoculars had converted her to bird watching. Alex told me to exercise caution. “Birding is a vice,” he warned. I held the lenses with trepidation.

With binoculars in hand, I joined Alex and Jessie more often, and our persistence in searching for an orangutan eventually paid off. At the end of a long day, a ways up the access road, we glimpsed a figure clambering up the trunk of a tree in the distance, scratching its belly. When it reached the top of the canopy, a loud cacophony of crashing limbs commenced as it constructed a nest for the night. Eventually, the crashing stopped. It lay down, carefree, and scratched its arms. Alex danced a jig of happiness, and we watched until the light grew dim.

Mr. Will Ford is a writer based in Beijing. A version of this article first appeared in The Washington Post.