KIMBE BAY IS WHAT CORAL REEFS WERE LIKE BEFORE HUMANS

If you want to know what a pristine marine ecosystem was like before there were people, look no further than Kimbe Bay in Papua New Guinea. The reefs here are not just healthy they are astonishing in their diversity. This relatively tiny seascape is home to 860 reef fish species, 400 types of coral and at least 10 species of cetacean. Kimbe Bay is one of the great treasures of the world’s oceans – home to more than 60% of coral species found in the Indo Pacific region. Scientists believe it could be one of the last refuges for coral reefs as climate change takes its toll – a kind of fully stocked marine biological storehouse. And yet few people have even heard of it.

New Britain is part of the Bismarck Archipelago, which forms the southern ridge of the so-called Ring of Fire - the volatile seismic horseshoe of oceanic trenches and volcanic arcs that wreak periodic havoc and destruction around the Pacific Ocean basin. The islands of the archipelago were formed some 8-10 million years ago as a result of what geologists refer rather mildly to as ‘volcanic uplift.’ Fly across the narrow Vitiaz Strait from mainland New Guinea and you will catch your first glimpse of New Britain - a narrow crescent-shaped island roughly 500 km long.

Running along the spine of the island are huge mountain ranges, created by those volcanic uplifts, which are so high they effectively isolate the north coast from the south and create their own weather patterns, so that while the north coast follows the normal monsoonal seasons the south is completely opposite. The mountains also create a partial rain shadow over the north, making the south coast the second wettest place on earth, with annual rainfall of between 6-8m.

Bounded by the long Willaumez Peninsular to the west and Cape Tokoro, some 140km to the east, Kimbe Bay is sheltered from the worst of New Britain’s weather. The seascape reaches depths in excess of 2000m, with dramatic seamounts and coral pinnacles rising up towards the surface, providing isolated ecosystems for the marine creatures of the bay.

The seamounts in particular act as beacons to the bay’s prolific pelagics and marine mammals. Twelve species of mammals have been identified to date, including sperm whales, orcas, spinner dolphins and dugong. The deep waters and generally benign conditions function as a kind of marine nursery and are fundamental to the incredible biodiversity of Kimbe Bay, but the other significant element are the nutrient-rich currents of the Bismarck Sea that provide the nutrients to sustain the bay’s residents and visitors.

To the south of New Britain are the 4000m deep-water basins of the Solomon Sea, which the Southern Equatorial Current crosses, as it makes it way towards the Bismarck Archipelago. As this powerful Southern Equatorial Current approaches New Britain from the south, it creates nutrient rich upwellings that join regional current flows and enter the bay. In a nutshell, the incredible forces of nature have combined to make Kimbe Bay an almost perfect coral crucible brimming with life. 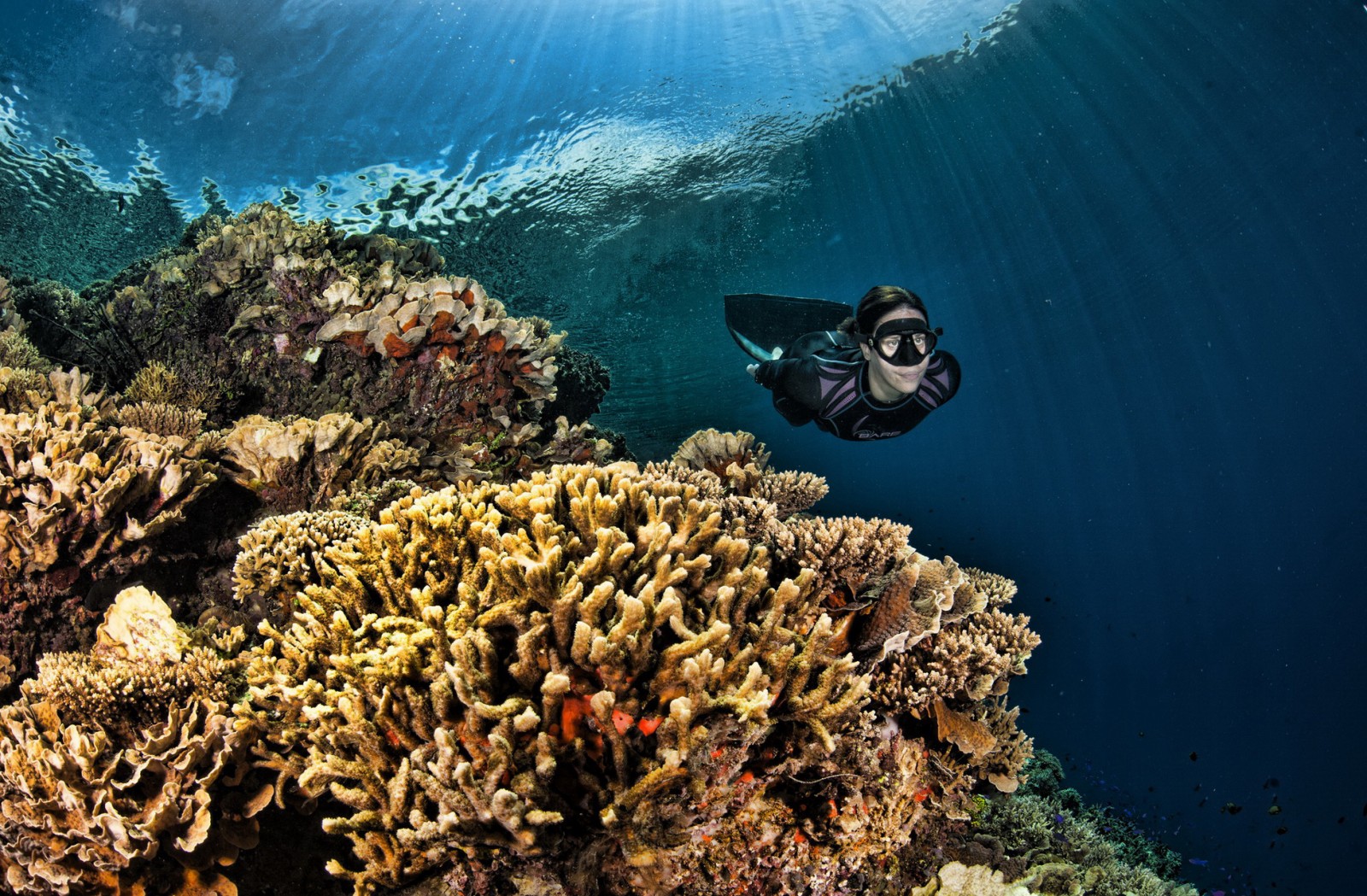 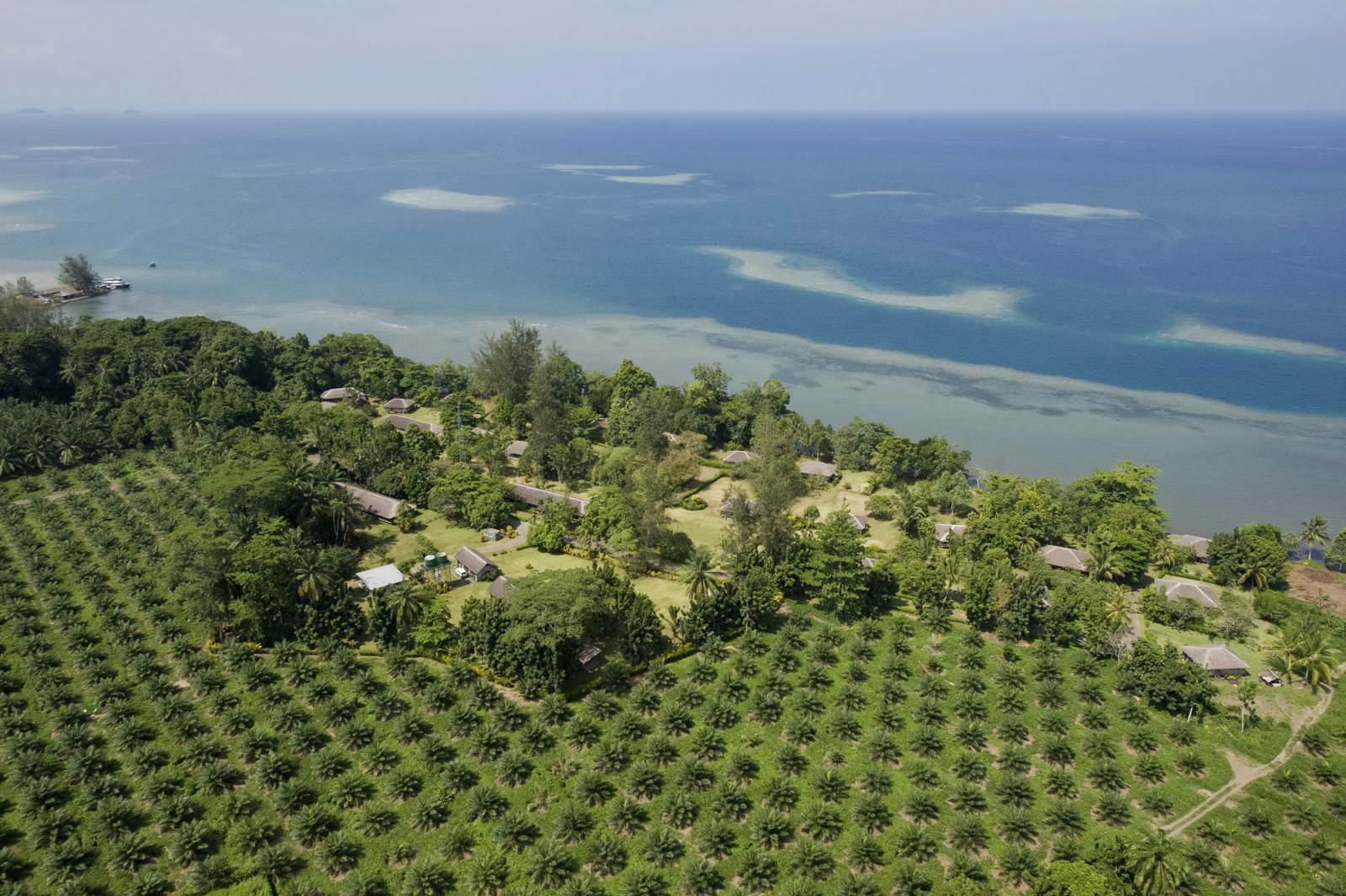 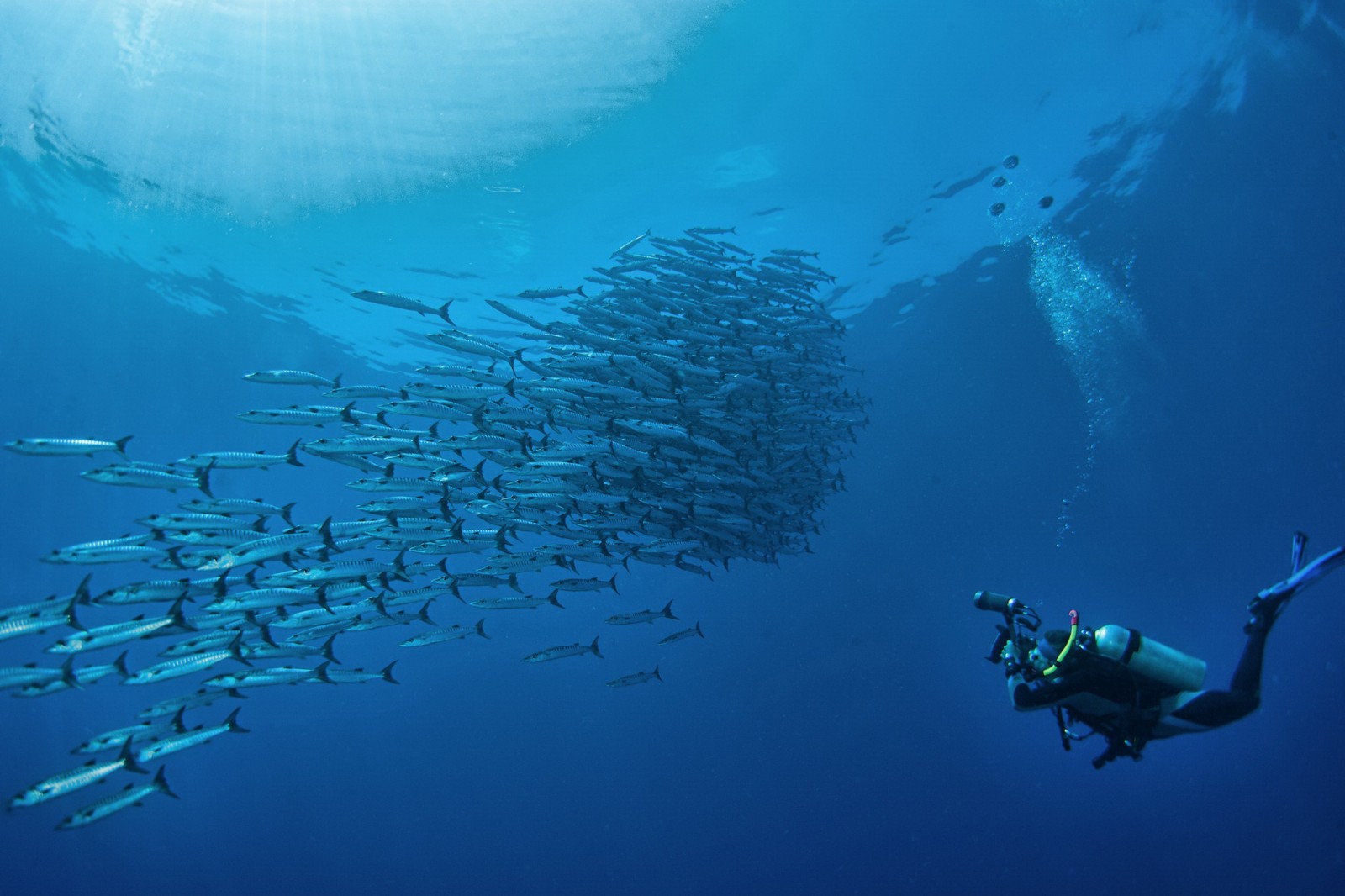 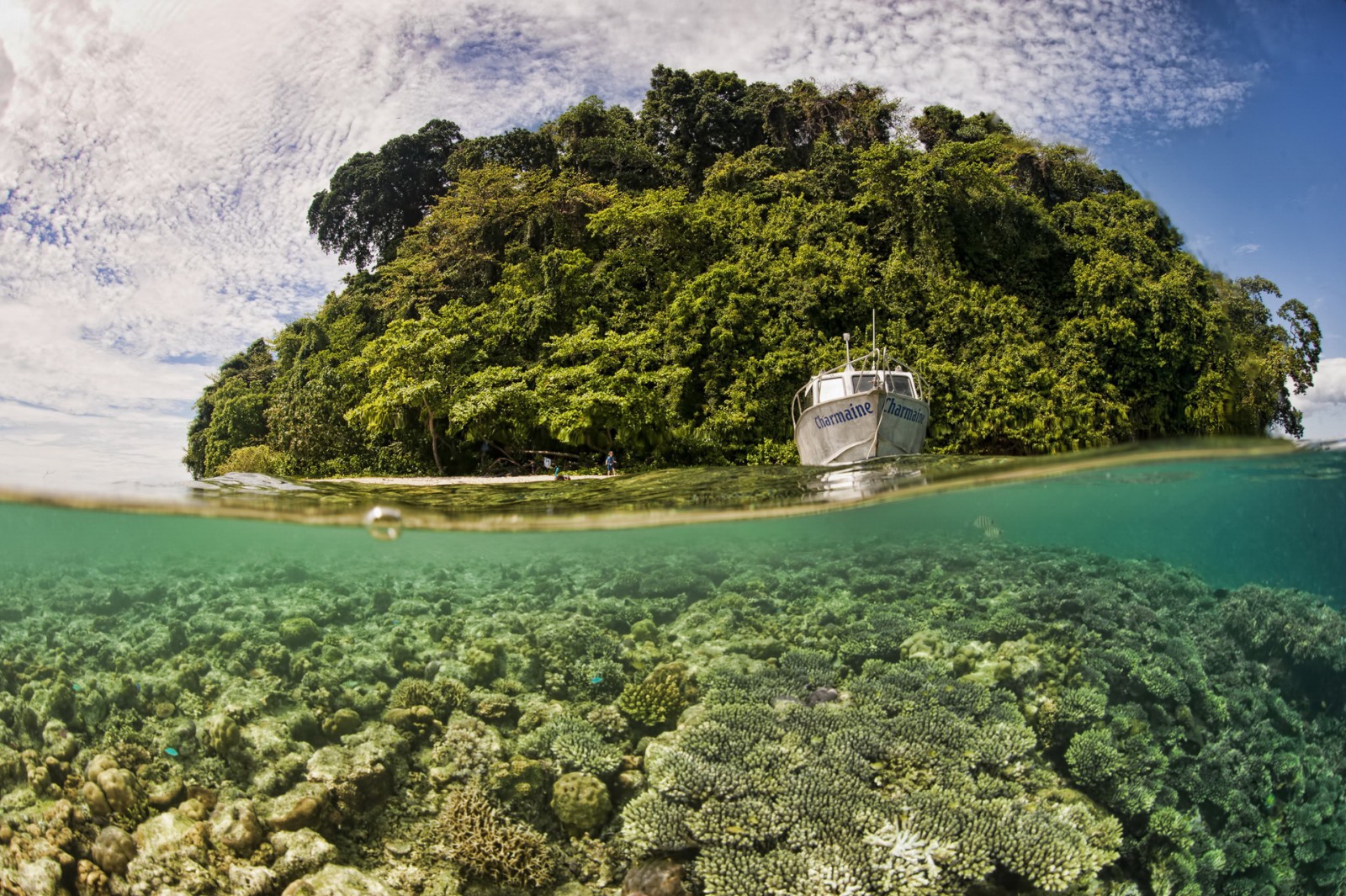 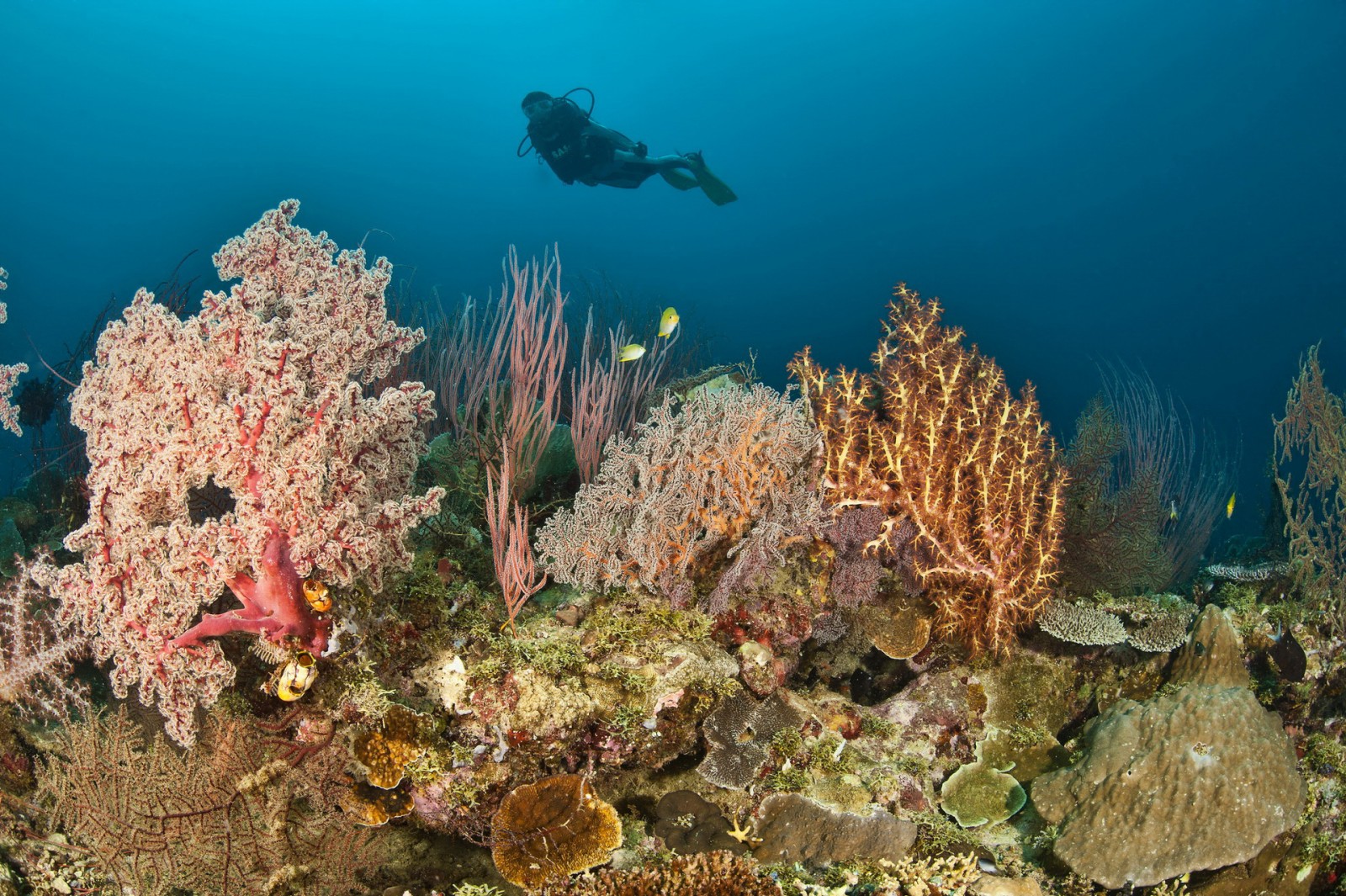 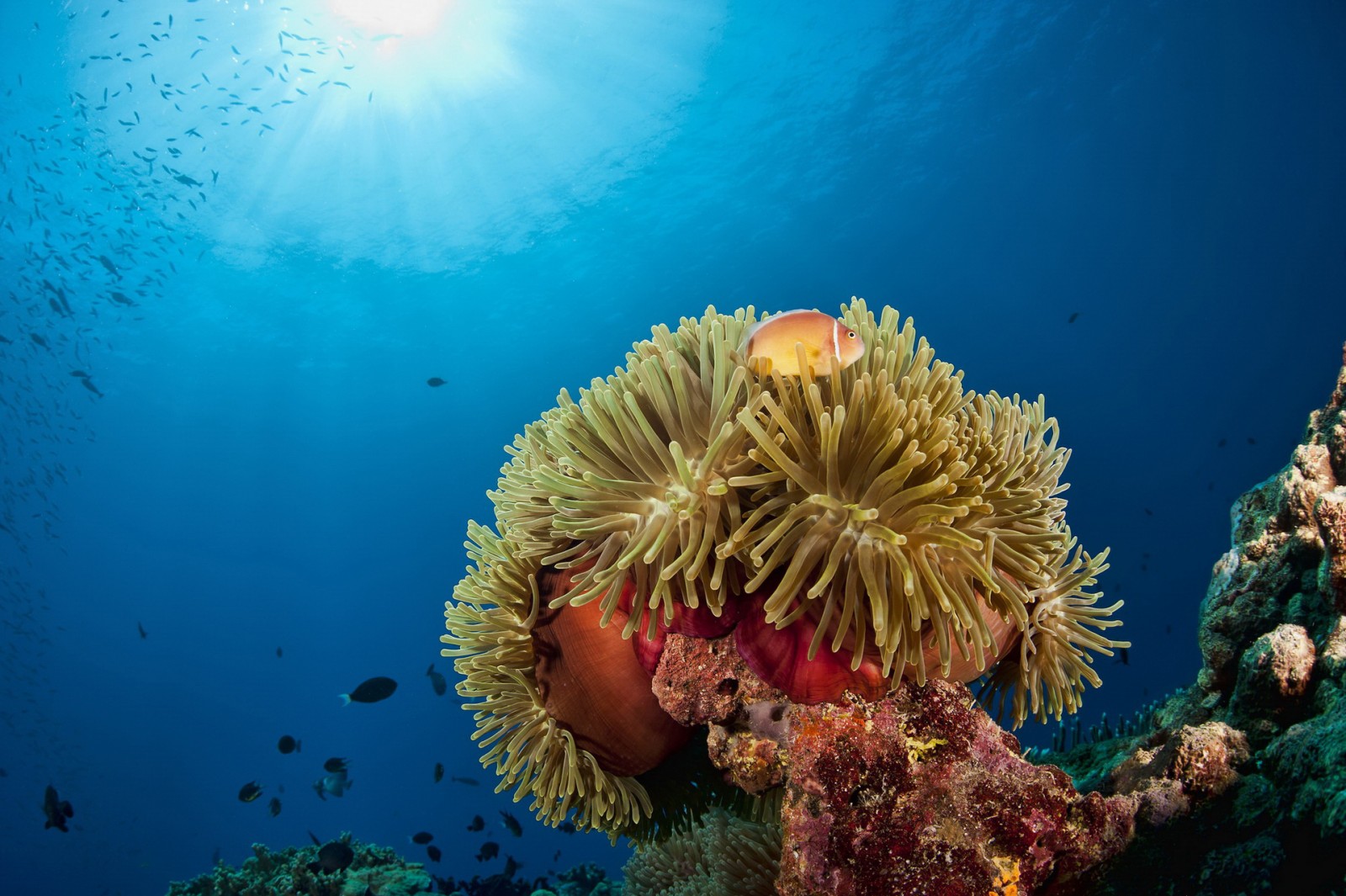 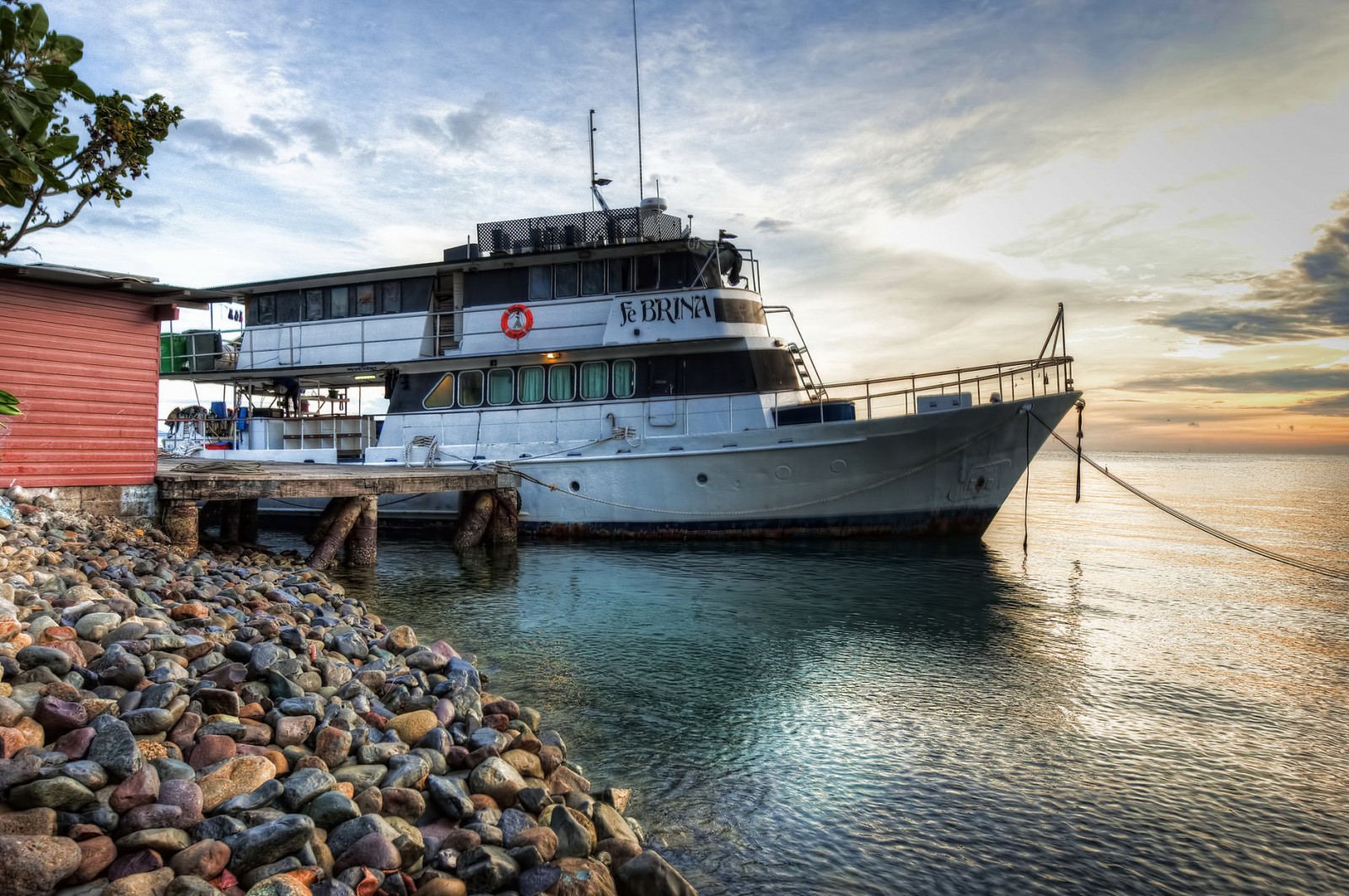 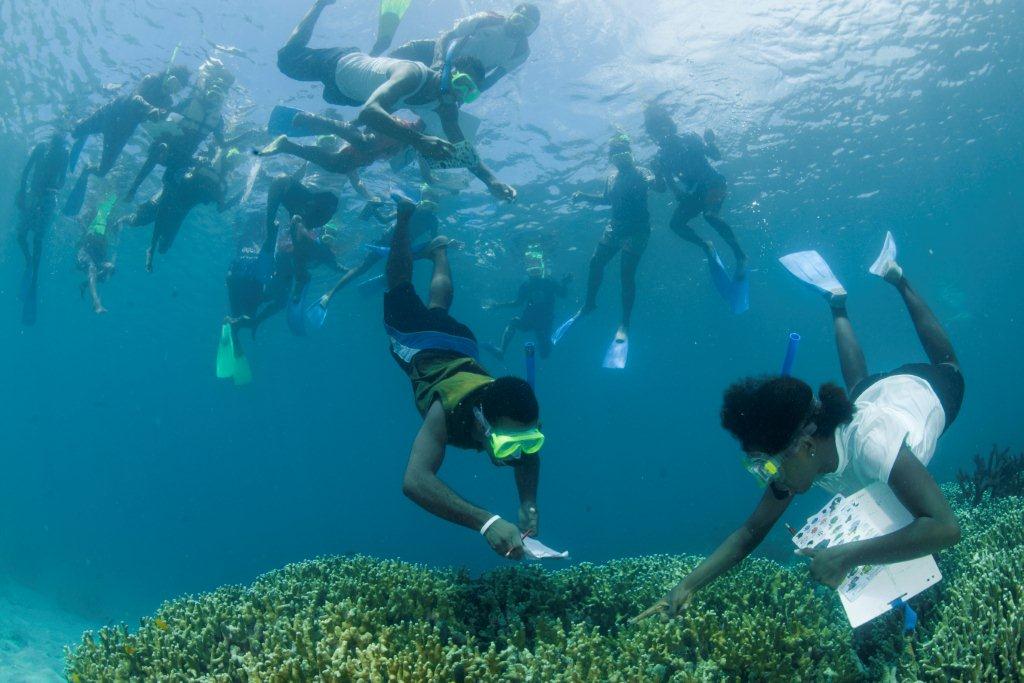 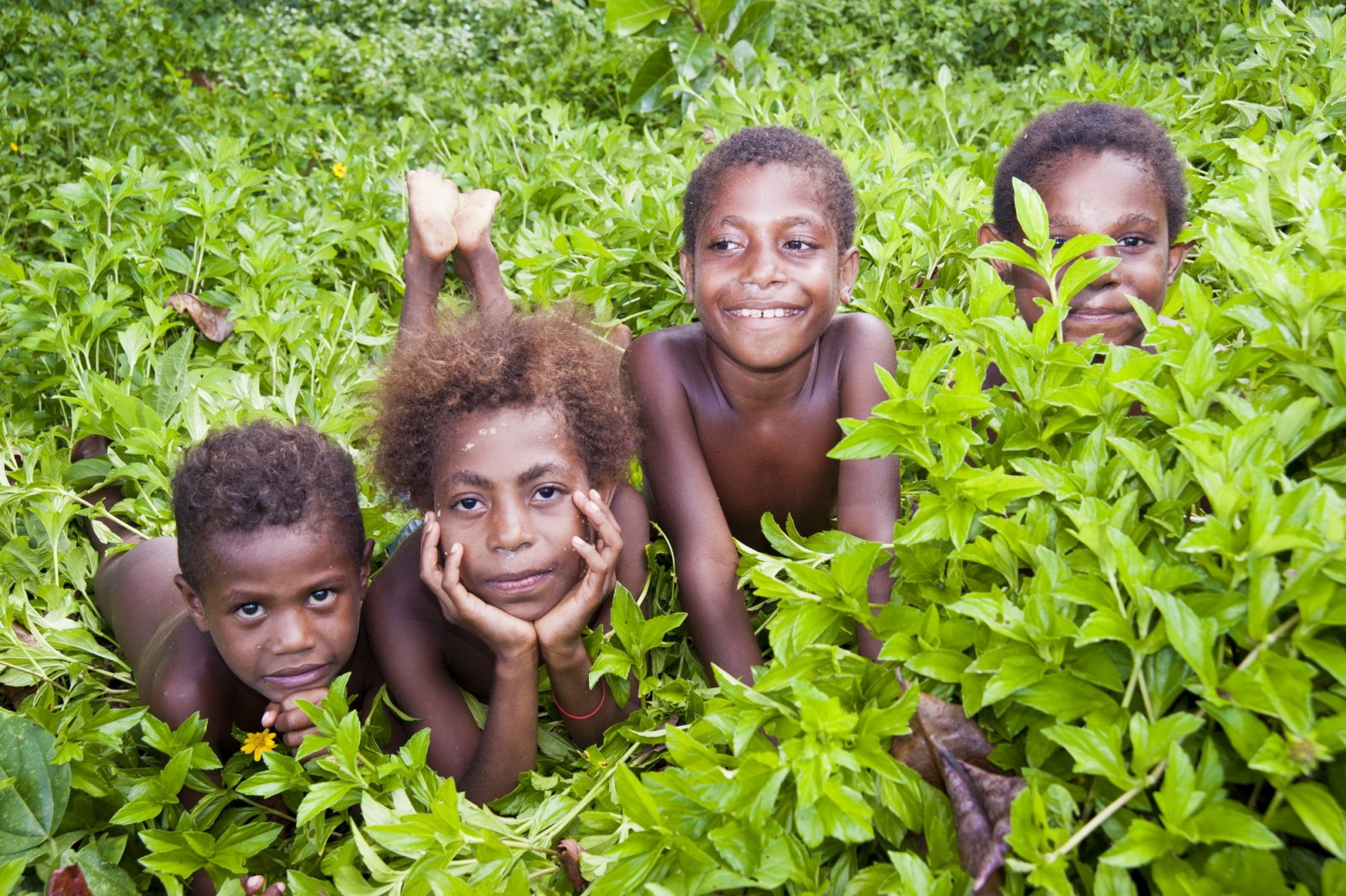 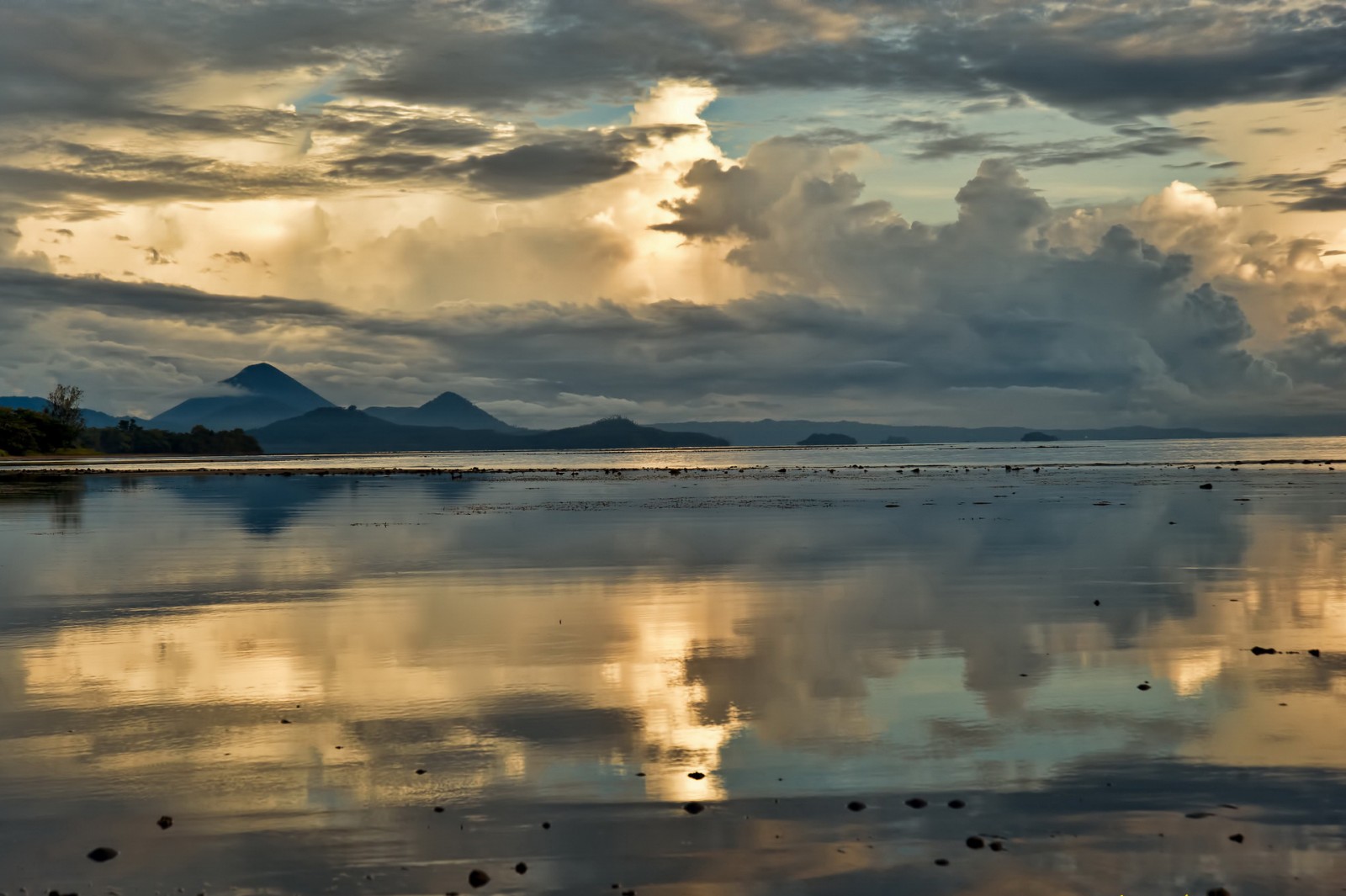 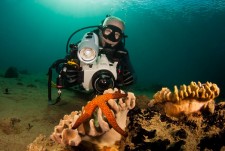 Don Silcock is based in Bali and travels widely in Asia. His website (www.indopacificimages.com) has extensive information & image galleries on diving in Papua New Guinea & other great locations across the Indo-Pacific.

Kimbe Bay offers a special kind of dive experience. I call it “fish-bowl” diving – it’s like being immersed in a fully stocked aquarium, except you never know what is going to come in from the blue. The random factor is particularly prevalent at the seamount dives such as Bradford Shoals. Rising from the abyss to within 20m of the surface, its reef structure is mainly flat plates of hard corals, which are not particularly photogenic save for the numberless iridescent reef fish that swarm there. But it’s what’s above the reef that catches the eye…

Surrounded by deep blue water and quite distant from the nearest reef structure, Bradford acts as a magnet for big fish and pelagics. On any given day you are almost certain to see large schools of barracuda, big-eye trevally, dogtooth tuna, unicorn fish and fusiliers. The there are the meandering but skittish white-tip reef sharks, the cruising gray reef sharks out in the current and sometimes even hammerheads on an occasional foray up from the deep. All with visibility exceeding 40m!

Agronomists Max and Cecilie Benjamin arrived in New Britain in the late 1960’s on a short-term assignment to modernize the Walindi palm oil planation. They had little knowledge or interest in what was in the water. But by the early 1970’s they had started to scuba dive on weekends and were literally the first people to discover the incredible biodiversity of Kimbe Bay.

By 1983 Max and Cecilie had started Walindi Plantation Dive Resort. Their training as agronomists taught them to take a long term, sustainable approach to their business. Industrial farming, increasing populations and social change were threatening the delicate balance of the Bay, so in 1993 they joined forces with local government and The Nature Conservancy (TNC) to develop a long-term conservation strategy.

A Rapid Ecological Assessment (REA) revealed the staggering magnitude of the Bay’s marine diversity and by 1997, the Benjamins had established Mahonia Na Dari (Guardians of the Sea), an NGO that runs community led education programs on Kimbe Bay’s unique marine environment. There are now eight locally managed Marine Protected Areas (MPAs) within the Bay, which have proved successful in preventing the use of dynamite and other destructive fishing methods.

Papua New Guinea is an incredible country, brimming with minerals and other natural resources. It is amazingly diverse, physically stunning and surrounded by some of the richest waters on earth. But it is not an easy place to work, with a system of governance that provides little support to grassroots projects like Walinidi. All the more reason to acknowledge the perseverance of Max and Cecilie Benjamin in not only sharing the underwater wonders they discovered here, but helping to protect them in perpetuity.