ACTIVISTS WINNING BATTLE TO SAVE UNIQUE REEF FROM DESTRUCTIVE MINING

A controversial mine on an ecologically important island off the northern tip of Sulawesi Island, Indonesia has been forced to cease operations following a ruling by Indonesia’s highest court. Bangka is a tiny 48 sq km island in the heart of the Coral Triangle and a popular destination for divers. It borders a marine park that protects two world famous dive sites, Bunaken and Lembeh, though many divers consider Bangka’s reefs just as impressive, not least the dive operators that run resorts there.

The seascape here is a global hotspot of marine biodiversity, supporting rare species like pygmy sea horses, leaf fish and dugongs as well as turtles, white tip reef sharks and even whales. But since 2013, an allegedly illegal mining operation has been changing the face of the island and threatening the fertile waters that surround it, according to witnesses and extensive photographic evidence. In March 2015, the Supreme Court upheld an earlier ruling that had deemed mining on Bangka unlawful, though this fact only came to light when it appeared on their website last month. As of June 10, 2015, all mining related activities ceased on Bangka, according to Didi Koleangan from NGO the People’s Alliance Against Mining (AMMALTA).

Under Indonesian law, mining on islands smaller than 2,000 sq km that adversely affects the local environment is prohibited. PT Mikgro Metal Perdana (MMP), an Indonesian subsidiary of Hong Kong based Aempire Resource Group, has been seeking licenses to extract iron ore from Bangka since 2008. According to dive operators and local residents, the company has already caused extensive environmental damage, including coastal excavation and land reclamation near sensitive coral reefs. Yet the company has enjoyed the support of officials at both the local and national level.

Sompie Singal, head of the North Minahasa Regency where Bangka is located, has issued a series of permits for MMP to explore for iron ore in a 2000ha concession – almost half of Bangka’s total area. An Environmental Impact Assessment (EIA) was approved by 26 out of 27 government officials and specialists, despite the global significance of Bangka’s coastal ecosystems and its close proximity to the Bunaken National Park, home to some of the highest levels of marine biodiversity on earth. Veronica Kumurur, Head of Urban and Regional Planning at Sam Ratunlangi University in Manado gave the only No vote. “They didn’t submit a detailed engineering plan, so how could we assess the environmental impact?” she says. “They also wanted to build a dam and a smelter on the island. I don’t think that is possible without damaging Bangka’s unique ecosystems.”

This is the other side of Bankga - and what the whole island could look like were it not for the mining in one part. Photo by Sascha Janson/uw-pix.com
This drone image clearly shows the extent of the infrastructure development on Bangka, despite denials by MMP Photo by Sascha Janson/uw-pix.com
This image of a shark resting on the reef clearly shows how unique the coral reef ecosystem is around Bangka Photo by Murex Dive 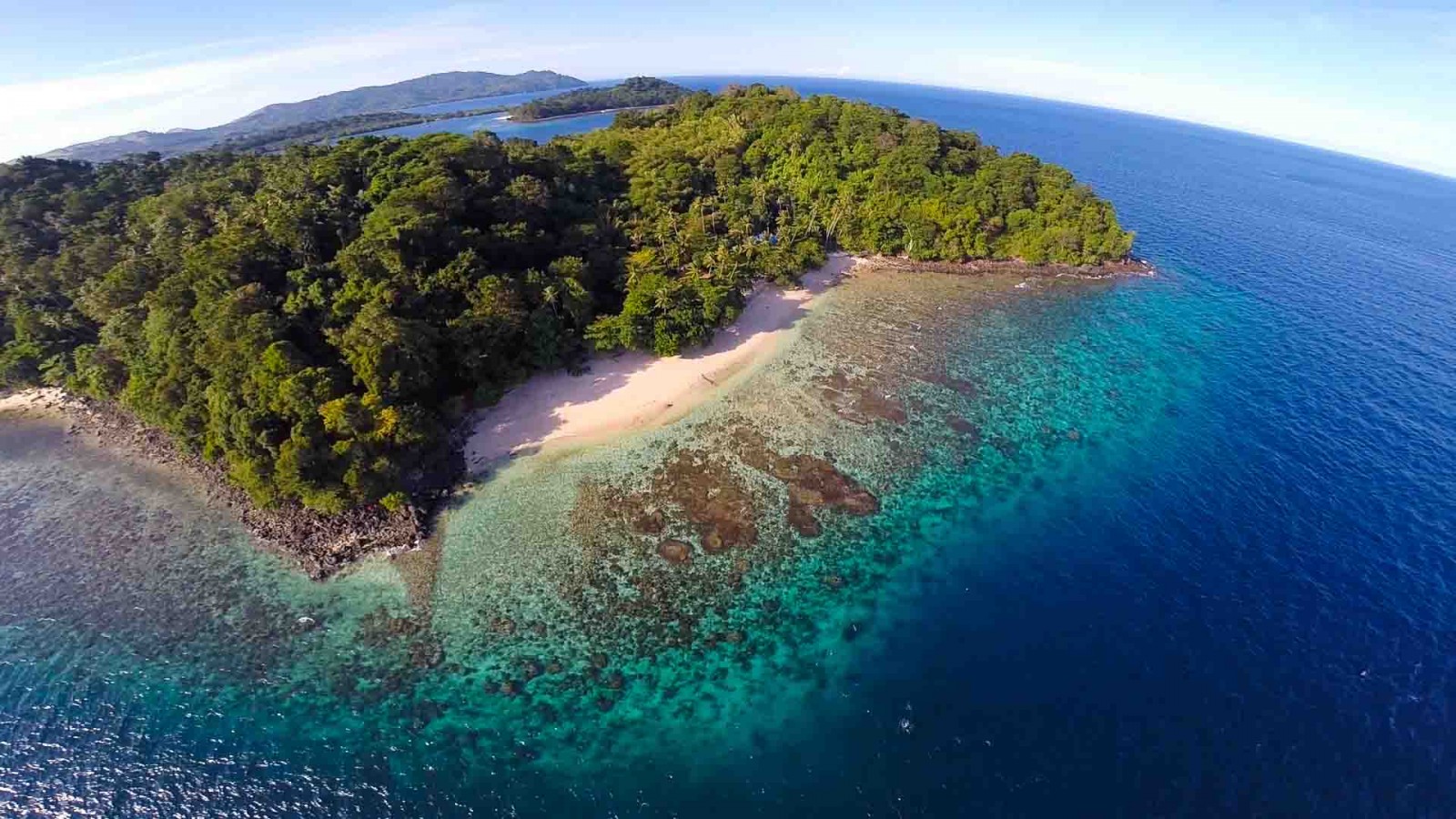 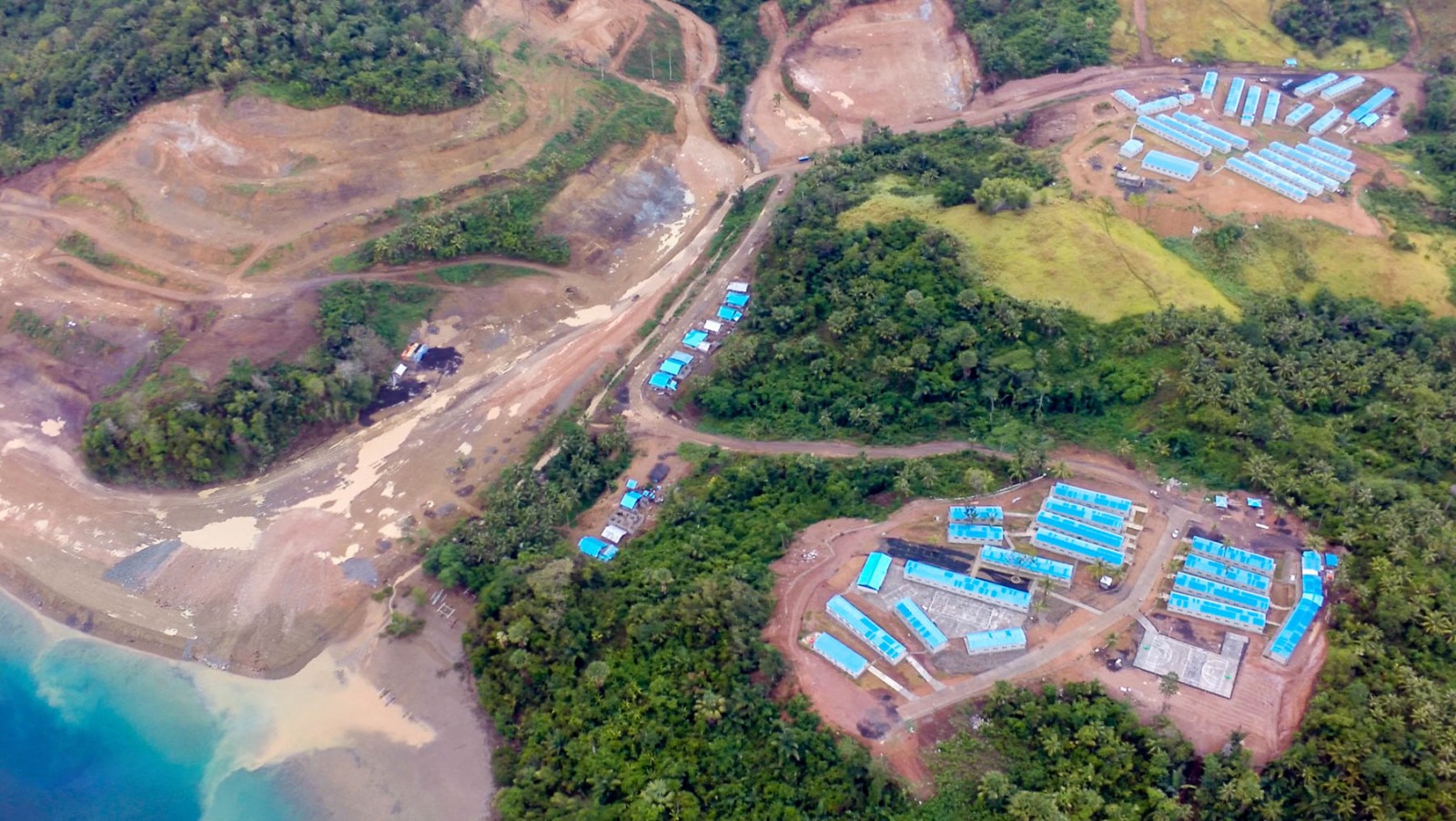 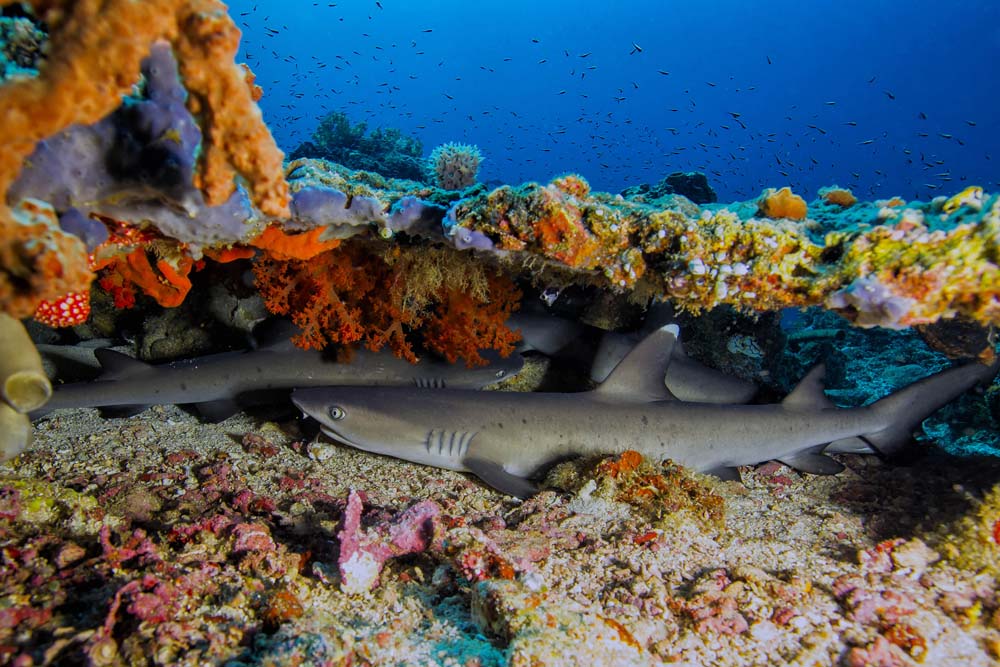 In July 2014, former Minister for Energy & Minerals Jero Wacik, who is currently under investigation for alleged graft in two unrelated cases, issued MMP a license to operate. This appeared to directly contravene a ruling by Indonesia’s Supreme Court in September 2013 that effectively blocked further mining exploration on Bangka.

But MMP had claimed the license issued by Wacik shortly before his resignation invalidates the prior ruling. Images taken by tourists and dive operators as recently as May showed the development of coastal roads, concrete jetties constructed over reefs for the landing of heavy machinery and nearby corals swamped in sediment. In February last year, angry locals tried to prevent an MMP boat carrying mining vehicles from landing on Bangka and a few months later, a group of divers claimed that MMP security threw rocks at them and deleted photos they had taken of damaged coral. On 18 March the Jakarta Post reported that 70 Chinese nationals were alleged to be working on the island illegally.

Save Bangka Island, a coalition of local people, environmentalists, divers and activists that has received support from Greenpeace and Change.org, has been leading the campaign to stop the mining. Indonesian rock stars Slank, who have visited Bangka on a number of occasions, are also supporting protest action. The Bangka Conservation Fund is running a crowd funding campaign to challenge MMP and its supporters in the courts on behalf of nine plaintiffs seeking to revoke the operating license issued by Jero Wacik, which they say is illegal.

The legal morass surrounding developments in Bangka is all too common in Indonesia, with local officials issuing controversial permits to extract natural resources, sometimes in violation of national laws. Corruption within the judicial system can make it all the more difficult to challenge controversial resource extraction contracts. As of March 2015, local administrators in North Sulawesi had issued a total of 145 mining licenses (IUP) according to Marly Gumalag, head of the General Mining Sector of the Department of Energy and Mineral Resources in North Sulawesi. At a recent meeting with tourism industry representatives in Manado, North Sulawesi governor Sinyo Harry Sarundajang played down the reported impacts of the mining development, calling into question evidence of negative environmental impacts. On 12 March, a delegation of Supreme Court representatives, the nine local plaintiffs suing MMP and the three lawyers representing them, carried out an official inspection of mining sites on Bangka. According to Didi Koleangan, local people including seven of the nine plaintiffs were prevented from taking part by police. He also stated that MMP removed heavy equipment ahead of the inspection, a claim supported by dive operators on the island. An MMP spokesperson did not respond to requests for comment.

The latest Supreme Court ruling on Bangka is a major win for the Save Bangka Island coalition. “The court effectively rejected a judicial review requested by the Bupati [Sompie Singal] and MMP, ” said Koleangan. “As of June 10 there has been no activity on Bangka and all the heavy equipment has been removed from the island.”

The Save Bangka Island coalition believes the ruling strengthens their position in the current court case which challenges the legality of the license to operate issued by the Ministry for Energy & Minerals under Jero Wacik. A verdict is expected in the coming months. For Koleangan, it's not enough that MMP has ceased operations as the island and it's coastal ecosystems have already been damaged. "Someone has to be held responsible for that."

Many environmentalists view Bangka as a crucial test case that could play a major role in determining the fate of other small, ecologically sensitive islands in Indonesia that harbour natural resources. The bigger question is whether the world’s largest archipelagic nation can manage its marine resources sustainably - a key element in President Joko Widodo’s grand plan to turn Indonesia into a major maritime power.