Growing up to 12 metres in length, the whale shark is literally the biggest fish in the sea. It's also arguably the most gentle and docile. Finding oneself within touching distance of this enormous creature is a genuinely humbling experience. The beautiful white patterns on its back resemble constellations of stars at dusk and its eyes, rolling like marbles in their sockets, seem to regard you with real curiosity. Indeed one female I encountered sought out our group of five divers, appearing to play in the bubbles and passing back and forth four or five times. In the Philippines whale sharks were hunted for generations (and quite probably still are in some places, though it is now strictly illegal under international law) and in China, a factory was discovered processing hundreds of whale sharks each year for their meat and fins. With this in mind, the emergence of a tourism industry built around whale shark viewing is a good thing. Fishing communities can retrain as guides and the same whale shark that bought short term profits as a carcass can bring in revenues for many years. Still, there whale shark tourism should be carefully managed - and for the most part in the Coral Triangle this is the case... 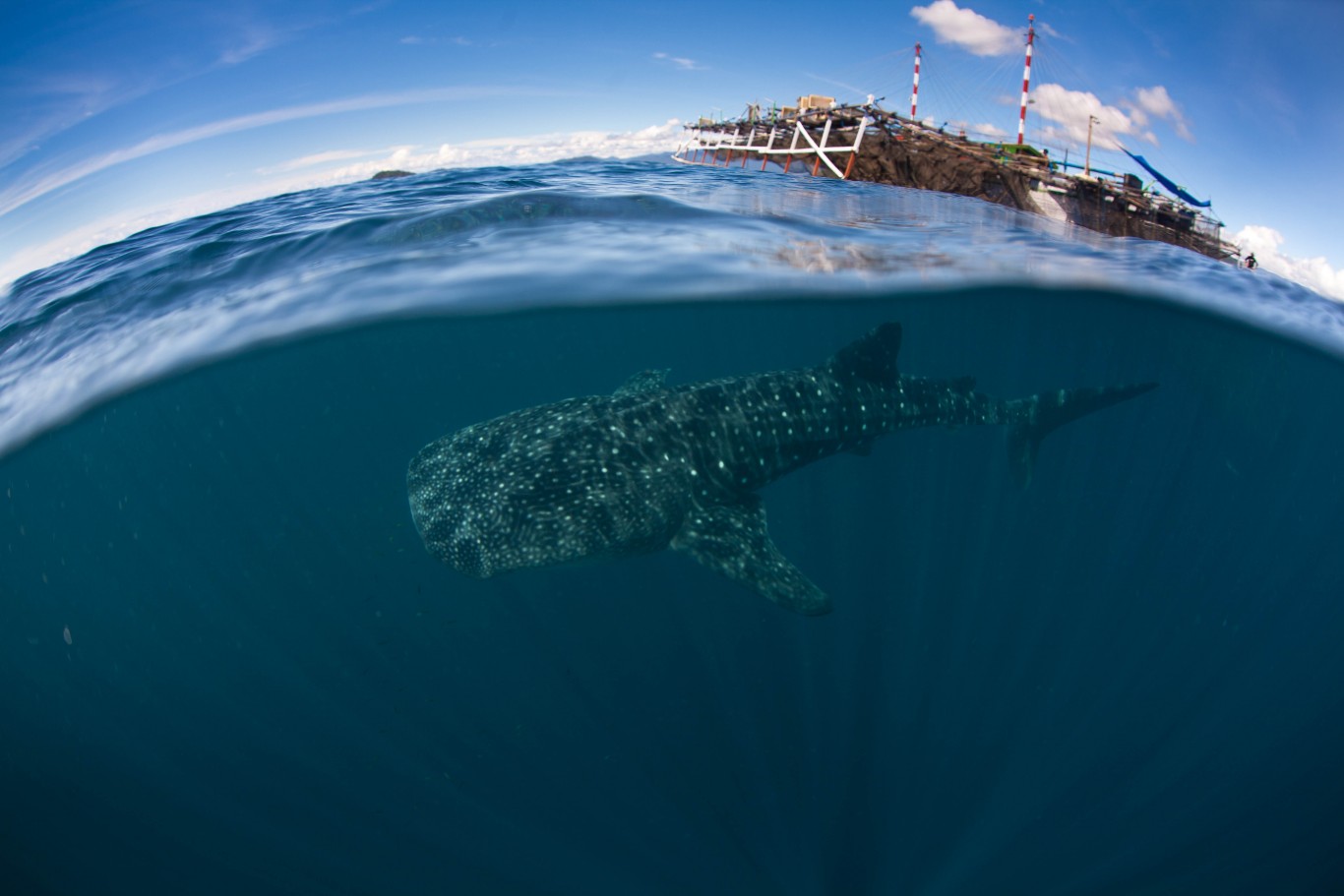 Cendrawasih Bay National Park is on the northern coast of the Bird's Head Peninsula, home to the greatest levels of marine biodiversity on the planet. Back in 2011, an expedition by Conservation International and the World Wildlife Fund chanced upon an unexpected whale shark aggregation in the bay. Fishermen who spent months at a time on Bagan - floating fishing platforms that use lights to attract small baitfish - had developed a mutually beneficial relationship with visiting whale sharks. They would allow the whale sharks to feed on fish that esape their nets, or were discarded. In return the giants would keep other predators away. Now they have anothe reason to have the whale sharks hanging around - tourism. Live aboard dive boats are now including Cendawasih Bay on their itineraries specifically for the whale sharks.  The best time of year to visit is June - October. A number of live aboards offer trips departing from 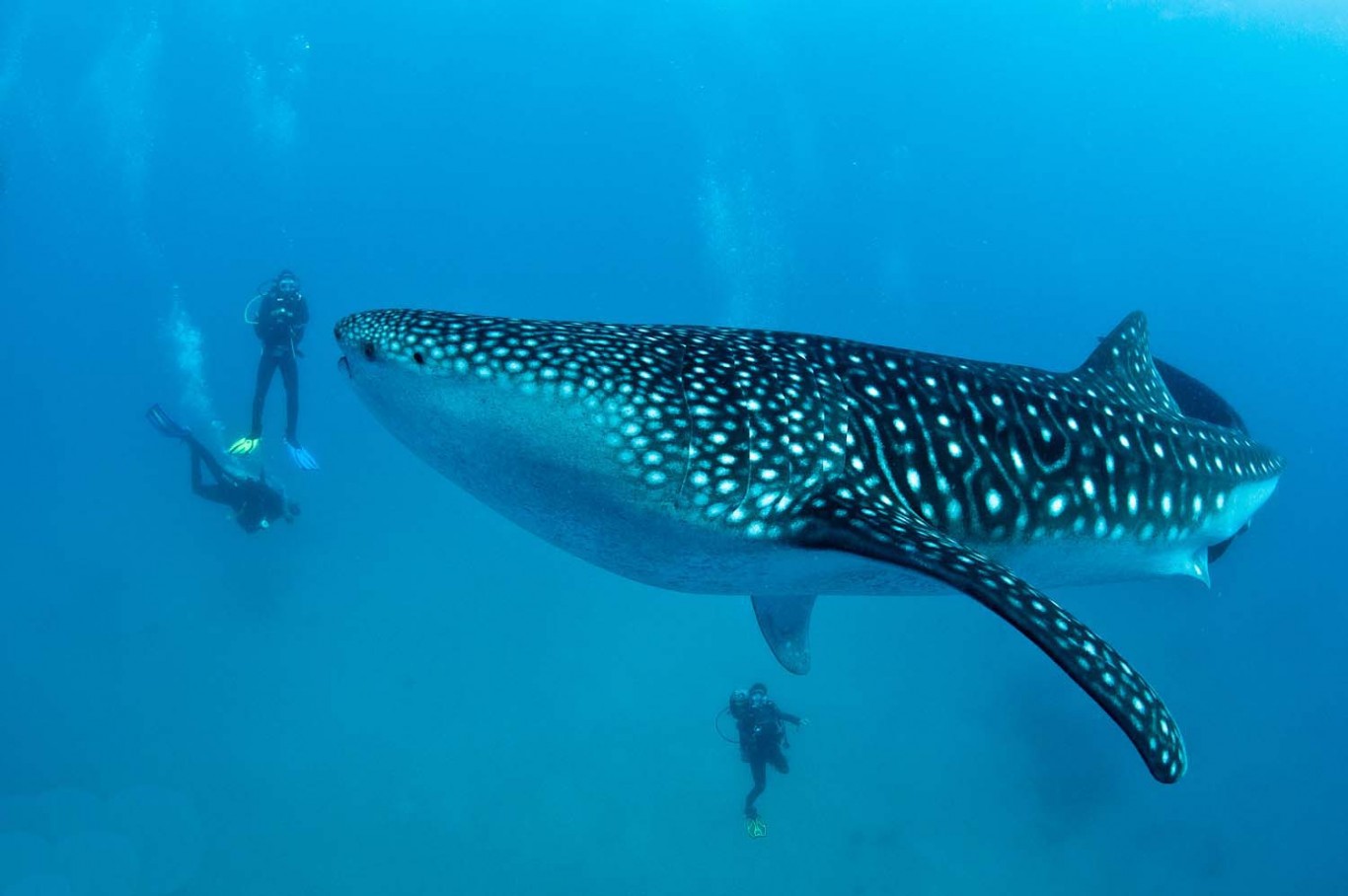 Until 1998, Donsol was on nobody's radar save for the fishing community that lived there. Today, the tiny, reomote village in the province of Sorsogon on Luzon Island has become one of the most popular places in Asia to swim with whale sharks. The local tourism bureau with help from WWF carefully regulates whale shark encounters, limiting the number of snorkellers (diving is not permitted) to six per boat. The sheer number of whale sharks in the area is astonishing - there have been reports of swimmers encountering scores of the fish. While nothing is guaranteed when it comes to wildlife encounters, Donsol is maybe the closest you'll get...As for the whale sharks, they head to Donsol Bay to feed in the nutrient rich waters. The season runs from November through June and the best months to visit are April and May - but be prepared to meet a lot of other tourists! You can fly into Donsol from Manila and Cebu - there are three daily flights from both. 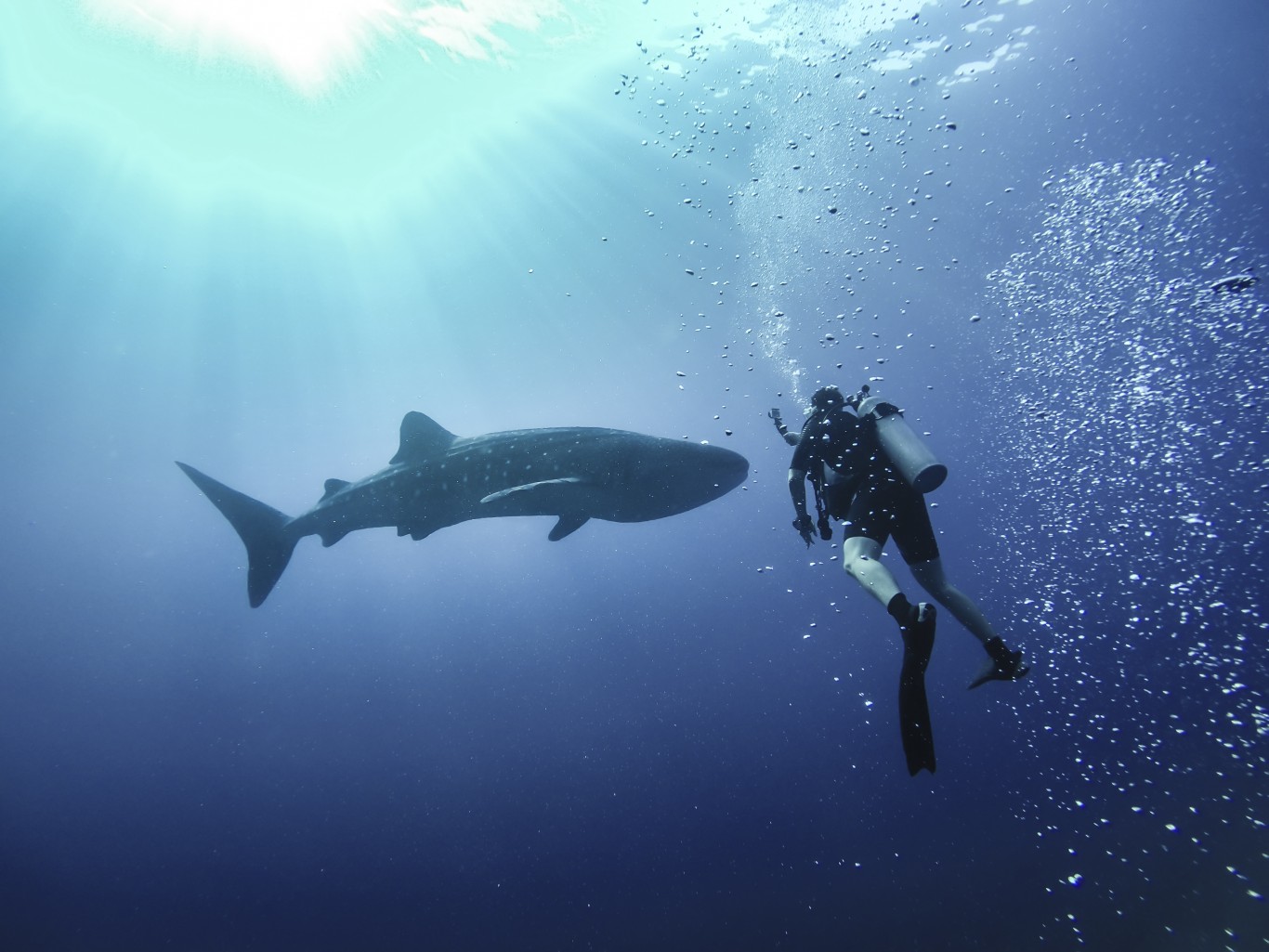 Tubbataha National Park is way out in the middle of the Sulu Sea, about nine hours by boat from Palawan in the western Philippines. It is widely considered among the best managed marine parks in the world, with a permanently occupied ranger station and regular patrols combined with the sheer remoteness of the reef keeping it healthy. Once overfished, Tubbataha has staged a remarkable recovery, a fact attested to not only by the visibly health coral gardens, but by the increasing presence of big pelagic species - the draw for divers. Over the last two seasons, whale sharks - which before had been rare as hen's teeth in the area - have been sighted regularly by dive boats. I was lucky enough to encounter them near the Park's south island - one of two tiny atolls where the main dive sites are located. There is somethng special about encountering a whale shark in the wild, where there are no guarantees, no feeding aggregations and human-whale interaction is brand new. Tubbataha's season is short, running from April through June, when currents and weather are favourable. You might well meet giant tiger sharks too...A number of live aboards depart for Tubbataha from Puerto Princesa in Palawan during the season. 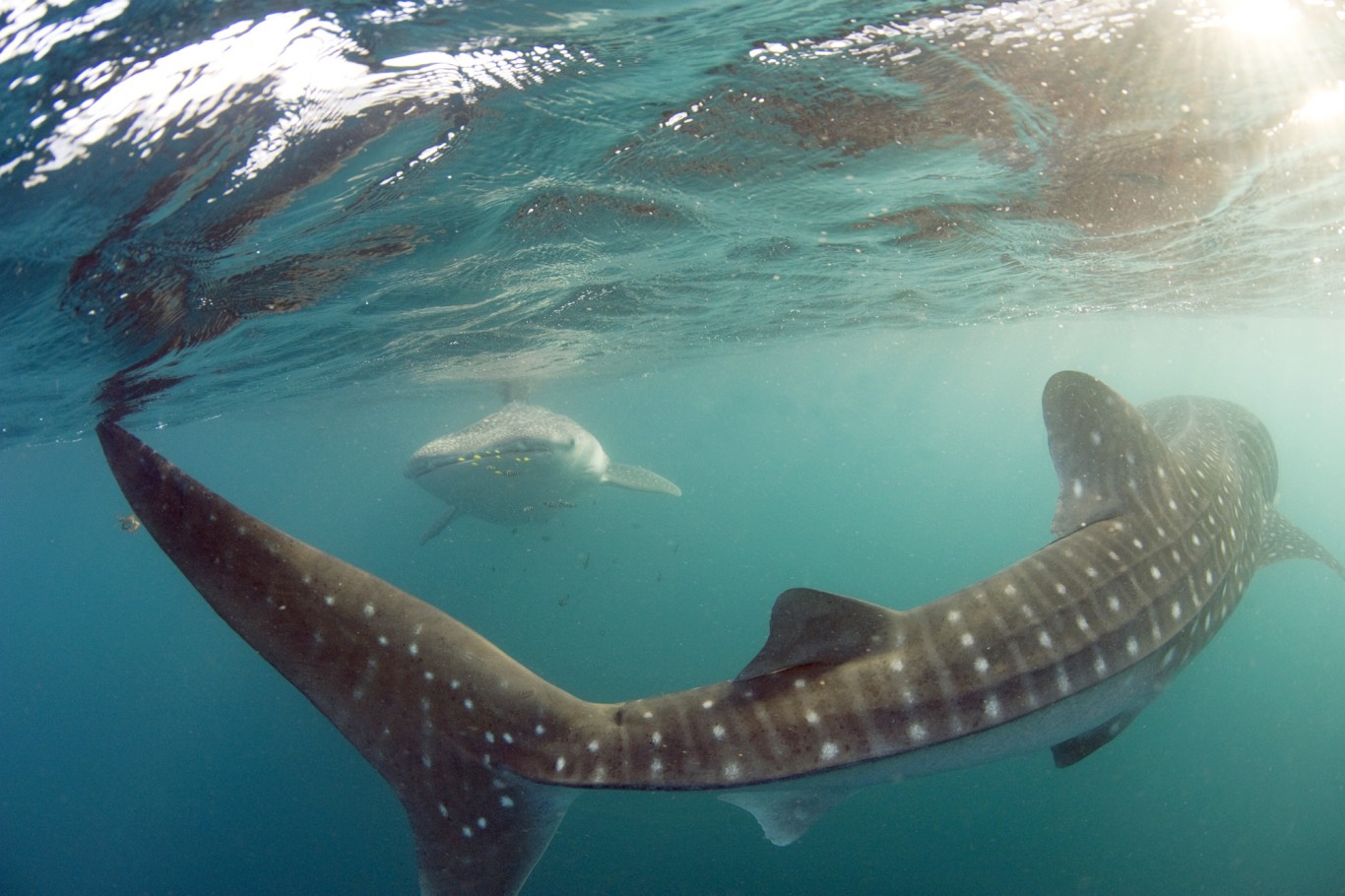 Whale shark sightings on Lankayan Island off the coast of Sabah, Borneo are far from guaranteed, but even if you don't meet any, you'll still enjoy an unforgettable vacation on an island that contends with the best the Maldives can offer. Plus whale sharks are just one of the many species that populate the reefs off Lankayan, including green and hawksbill turtles, barracuda, jackfish and seahorses. There's only one resort on the island - Lankayan Island Resort, which was built in 1997. The whale shark season runs from April-May, when the sharks are migrating through the Sulu Sea, often passing close to the island to feed near the drop offs. To get to Lankayan, you fly from Kota Kinabalu to Sandakan and then take a boat. 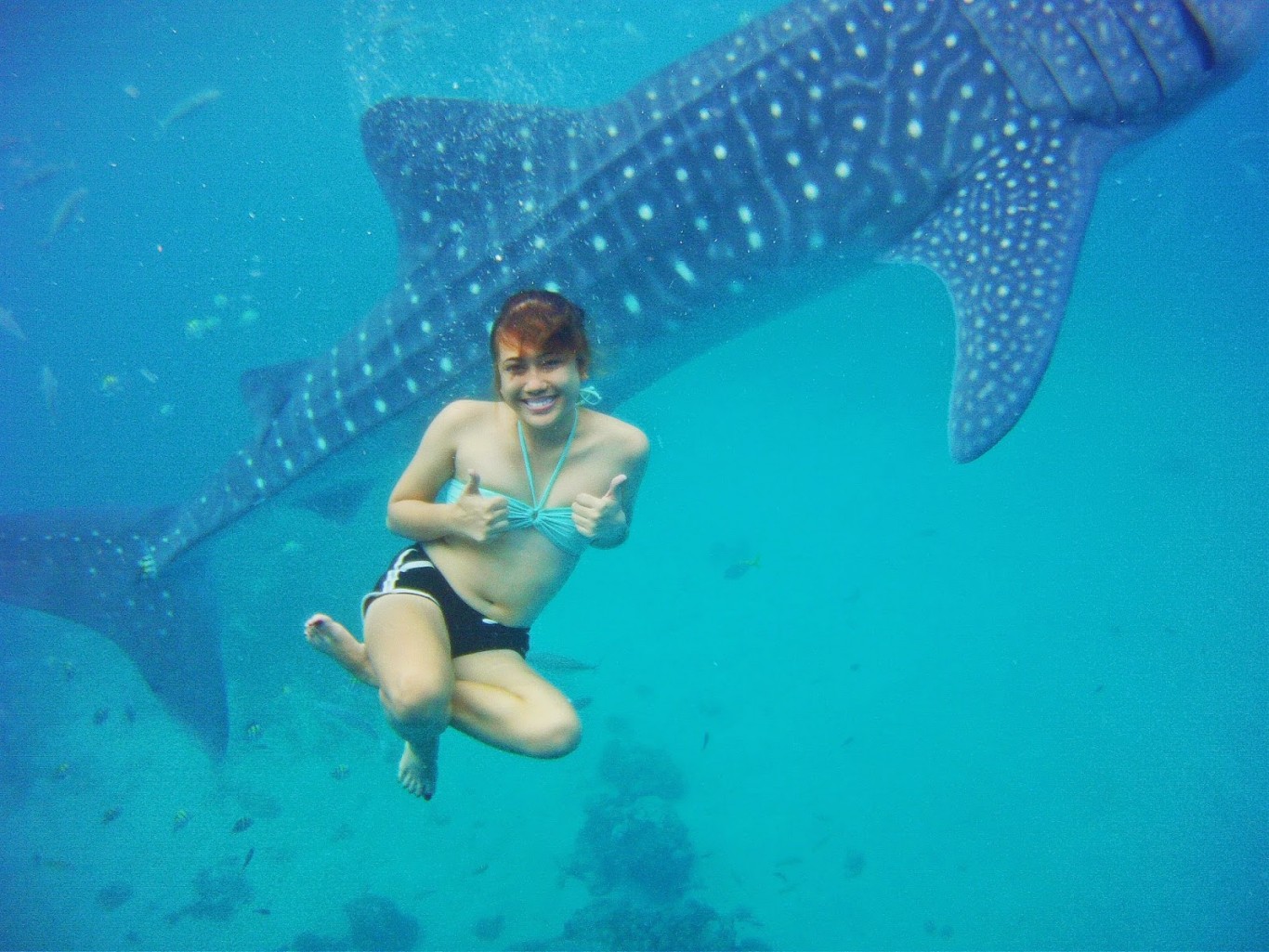 Oslob on the island of Cebu in the Philippines is probably the most popular places in South East Asia to see whale sharks. It is also the most commercial and controversial. Unlike the other locations we've listed, Oslob is a feeding aggregation. Former fishing communities that have turne to tourism have been quick to capitalize on the presence of whale sharks by feeding them krill every day. While it's true that you're almost guaranteed to see whale sharks here, what you'll see a whole lot more of is package tourists intent on taking endless selfies with the technically captive giants. Feeding aggregations are controversial because they alter the creatures natural behaviour, which can have a knock on effect for ecosystems and the animals themselves. There have also been numerous reports of bad dive practice, including one of a girl 'riding' one of the sharks. Of course, you could argue it is preferable for the fishermen to feed the sharks and earn money from tourism than to kill them for meat and fins. But tourism isn't just automatically good. It needs to be properly managed and regulated so it doesn't become a circus.