These heartbreaking images were taken near Nusa Lembongan, a tiny island just off the coast of Bali. Some of Bali's best dive sites are in this area. But in rainy season, plastic pollution that has gathered in Bali's waterways is washed out to sea. Thousands of tonnes of rubbish, some of it from neighbouring Java, is carried on local currents to wash up on beaches - Bali's south west coast is particularly hard hit. This problem is hardly exclusive to Bali - but because of the island's international reputation as a tourism destination, it tends to get coverage in the media. In fact Indonesia is the second biggest producer of coastal plastic pollution after China. Hardly surprising for a fast developing country of 250 million people spread across 17,000 islands. Photographer Nick Pumphrey is an ambassador for Take 3, a non profit that has a very simple message: it invites us all to take three pieces of rubbish with us whenever we leave a beach or other waterway where waste is visible. Here he tells us about his experience at Lembongan. A version of this story ran over at take3.org.au. 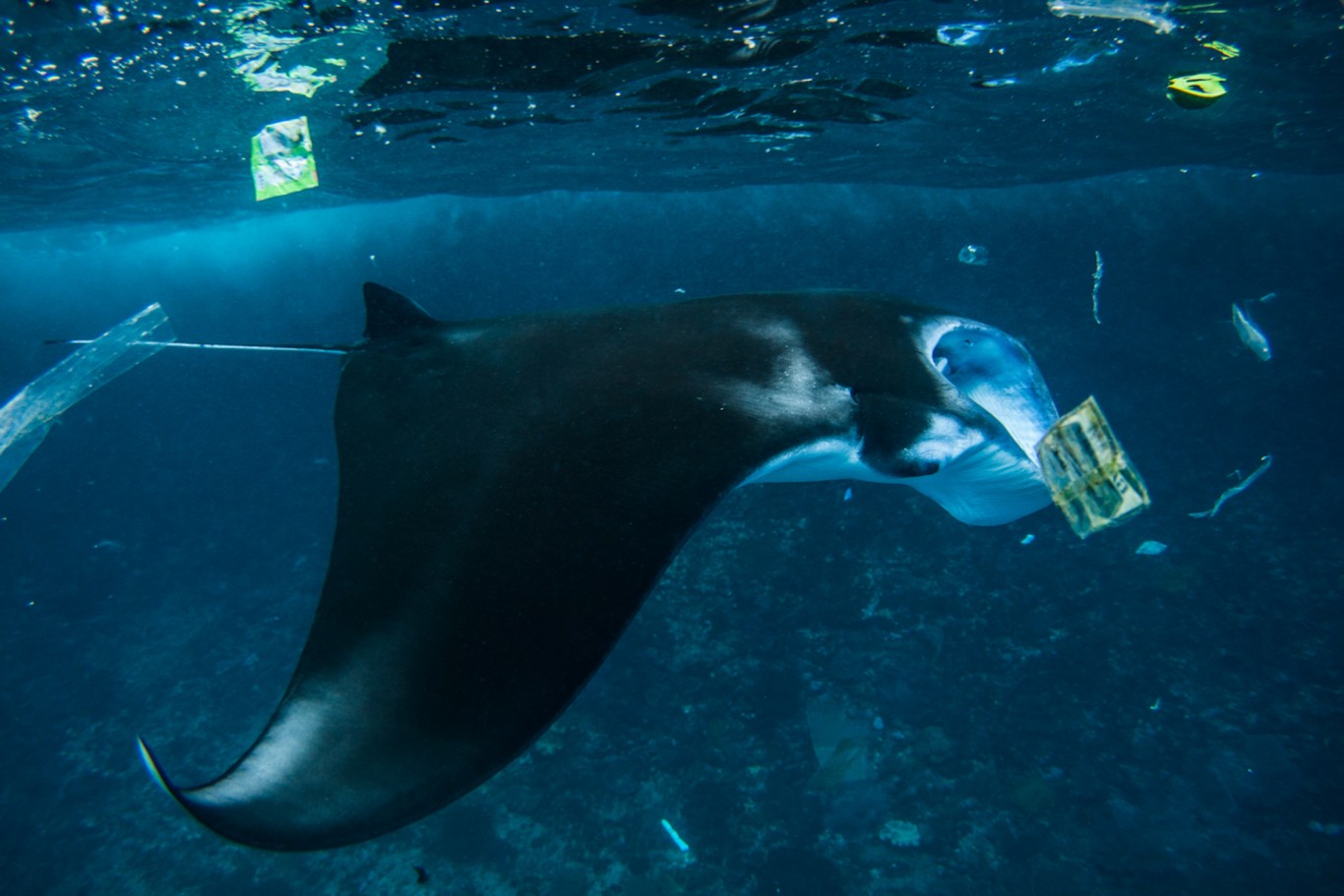 Manta rays are one of the big attractions at Nusa Lembongan, where they can be seen year round.

I was on a quick trip over to Nusa Lembongan with a couple of friends. One of the girls really had her heart set on seeing the Manta Rays and I figured I could possibly get a few cool underwater shots at the same time. It was kind of a strange morning, the skies were dark and ominous with the wind picking up... Still we went to the little cove where a few more boats were huddled up with divers/snorkelers hoping to see the Mantas. It was pretty choppy, lots of movement on the water surface, I was actually starting to feel sea sick at that point so I jumped overboard with my water housing to feel normal again. 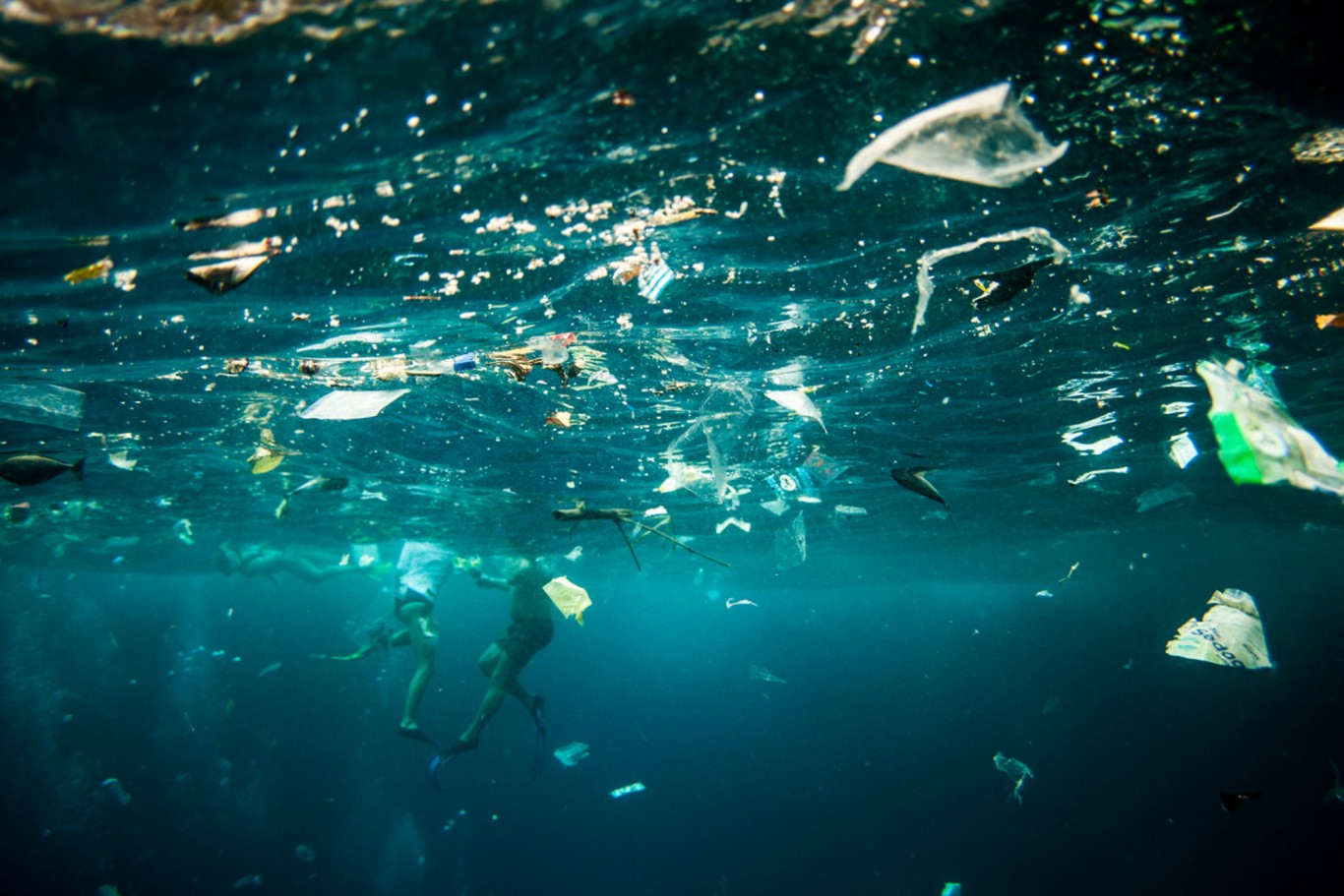 It was when I dived under for the first time that I saw it all. It was pretty shocking, an unwelcome surprise for sure! There was a lot of it, so I felt compelled to shoot it as well as the manta rays. The mood on the boat to the next spot was pretty sombre. Even though we had all witnessed the majestic beauty of the manta rays, truly incredible as they glide past you at such close proximity!! Unfortunately the sights under water of the litter kinda marred the experience. 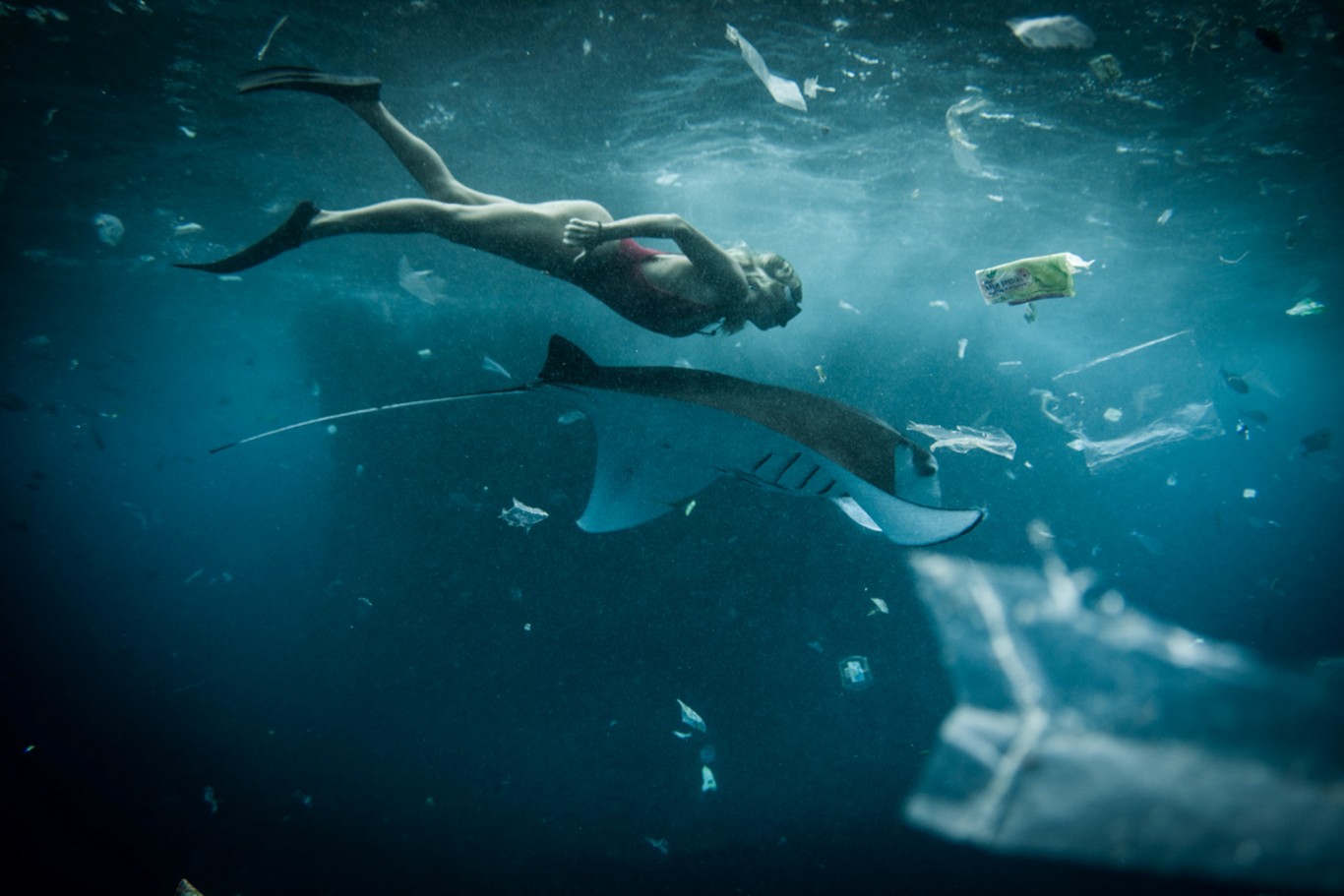 A snorkeller swims with a manta ray through a whirlwind of plastic trash off the coast of Nusa Lembongan near Bali - one of the island's most popular dive locations.

Our captain said it was due to the rain and that it had come from the land, backing it up with "It’s not normally like this". Which is probably true, but of course the problem is not being able to deal with their waste, and they use of too much plastic! the most visual problem is the plastic packaging and bottles. That is what you see mostly when the litter is about. For people to make a difference they have to become aware of the problem first,then aware of personal habits when it comes to purchasing goods from outlets... Like buying the 10 litre water dispensers instead of bottles everyday of your trip. That is a start for individuals...
But there is only so much we can do, it seems the big problem is that Indonesia does not have the infrastructure to deal with all of it properly. 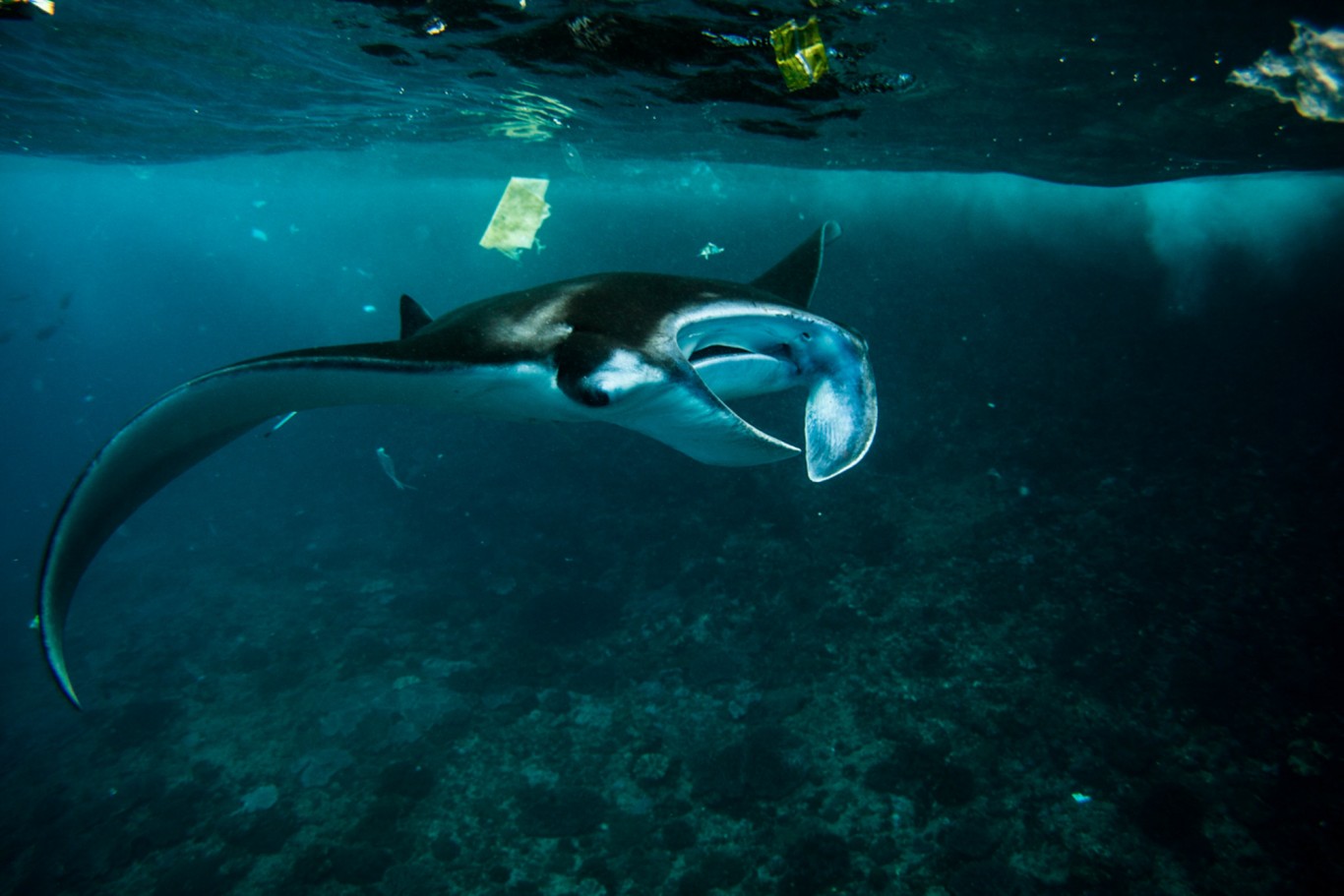 manta rays are filter feeders, so they swim with their mouths open to catch zooplankton. It's almost certain that in these kind of waters they are ingesting plastic.

I have spoke to a few people in Bali on my recent trip there. The youngsters of Bali are very awake to the problem,they are actively trying to bring sound ideas to the table like giant water nets in rivers to stop the plastic ending up in the sea and reusable bottles etc etc. It is a good start that they are aware, but it still seems that the problem is not being addressed properly by those with a little bit more 'power'. 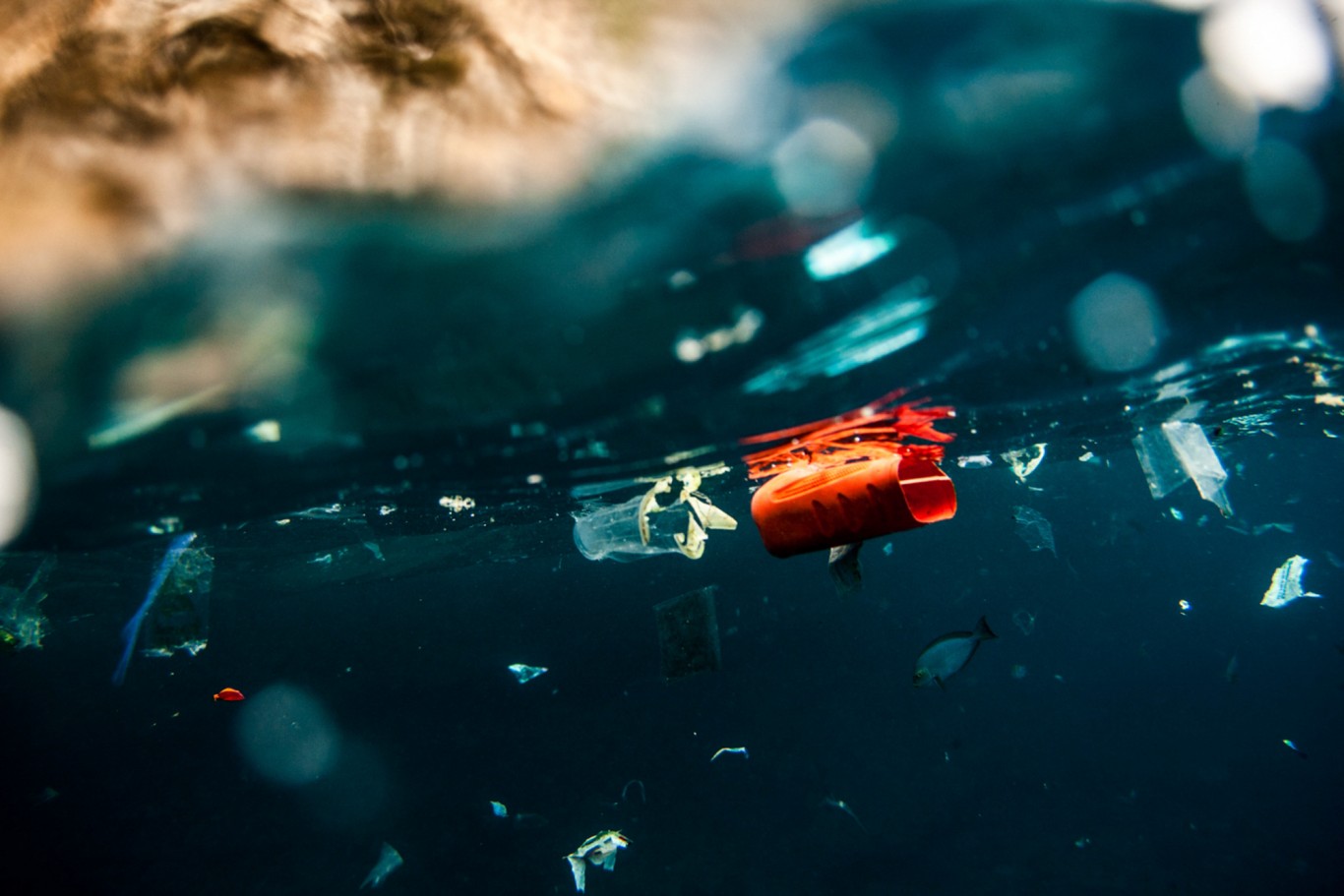 Small single portion packaging for consumable goods constitute much of the plastic pollution that ends up in Indonesia's coastal waters.
As for the rest of Indonesia I'm not sure. It seems that burning the litter is pretty commonplace, that seems to indicate that there is no real system in place to deal with it. In the end it is tourism that brings money to Bali to build their economy but on the flip side it creates the abundance of litter that does not yet have a solid working system in place to deal with it.