SEA CUCUMBERS ARE IN SHARP DECLINE. HERE'S WHY THAT SHOULD WORRY US

Sea cucumbers may resemble giant turds, but they're arguably just as crucial an element of ocean ecosystems as high profile conservation favourites like sharks or blue fin tuna. And despite their unappealing looks and appalling manners (when threatened they eject a tangle of spaghetti like strings out of their bums) they can fetch whopping sums since they are a popular delicacy particularly amongst Chinese populations as well as being used in traditional medicine. It's this market that has been driving down sea cucumber populations in recent times and some studies have estimated that global stocks have been depleted by as much as 50%. Fiji is just one place where sea cucumbers are under immense pressure in the Coral Triangle... 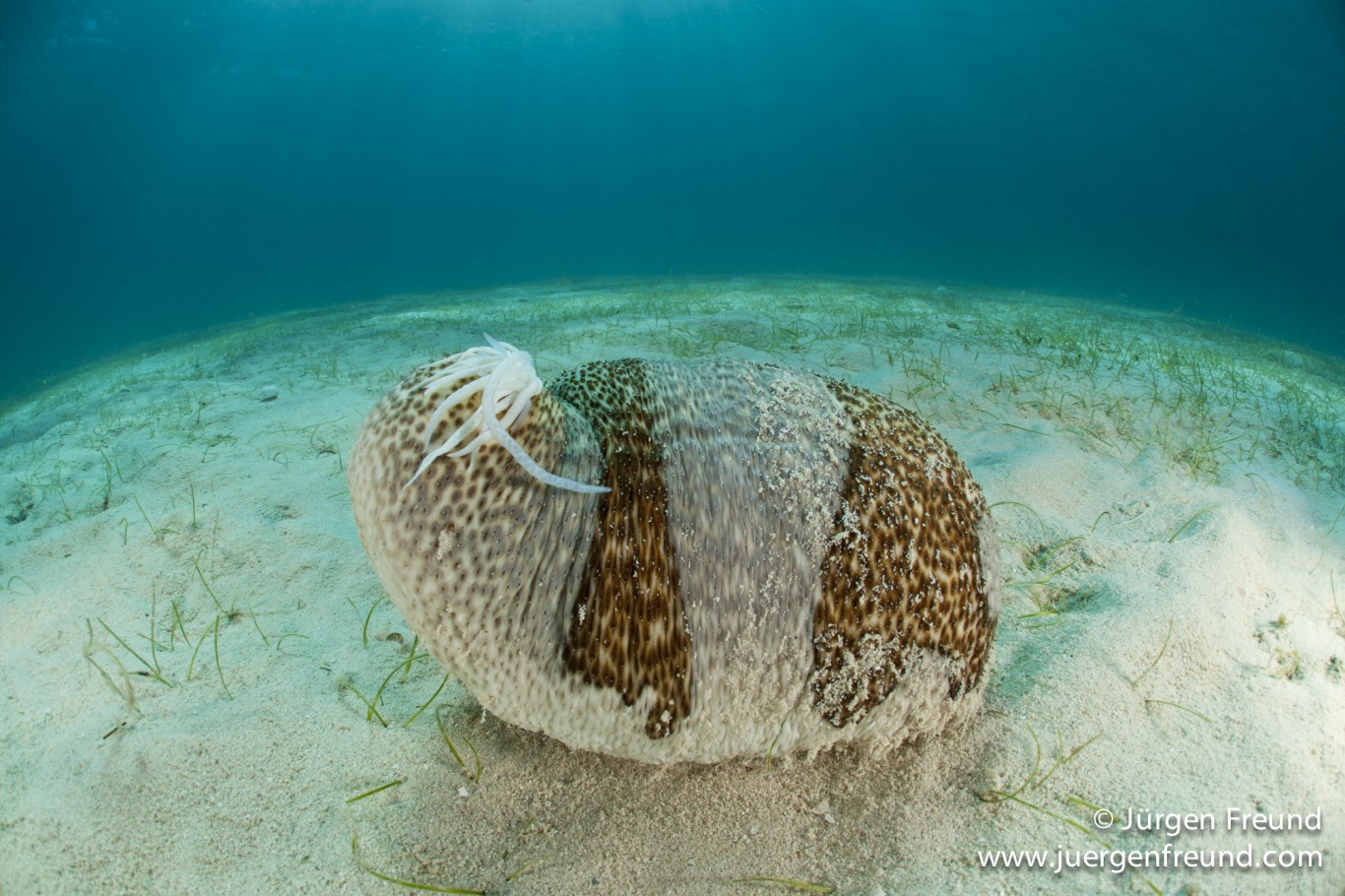 Sea cucumber on the sandy ocean floor. Feeling threatened, this sea cucumber is discharging sticky threads  from its intestines as its defence mechanism.

Sea cucumbers are flexible, elongated echinoderms.  They live on the sea floor in reefs, lagoons and coastal shallows with some species inhabiting deeper waters. They move about slowly over the sea bottom like scavengers, feeding on debris found in the sand and sediment. Some species bury themselves in sandy mud while others perch on coral or rock crevices. For many thousands of people in Fiji, diving for sea cucumbers provides a livelihood. The trouble is, overfishing is causing a drastic depletion in sea cucumber numbers - a problem exacerbated by the fact that some of Fiji's Pacific neighbours have placed a moratorium on the fishery, recognising the problem. 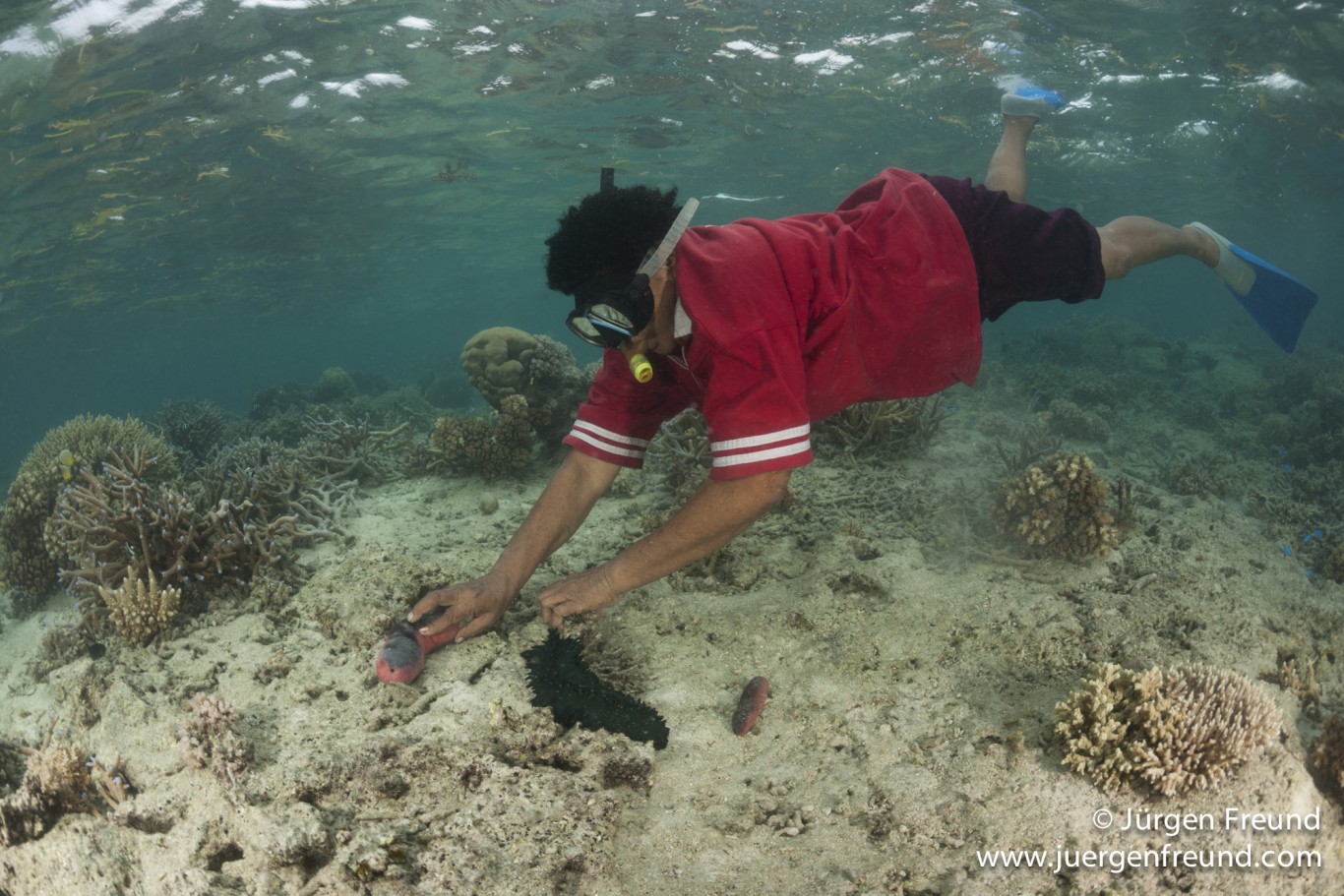 Sea cucumbers are processed into a dry food product called bêche-de-mer and exported to Asian markets, mainly for the Chinese. Sea cucumbers have been harvested and processed into bêche-de-mer since the eighteenth century, but they have been increasingly exploited through the nineteenth and twentieth centuries as the Chinese population, appetite and buying power has exploded. As sea cucumbers become harder to find in Fiji, divers are taking ever greater risks to find them, using compressor engines to pump air into common garden hoses so they can go deeper for longer. Unfortunately, most have no understanding of decompression sickness - many communities are losing significant numbers of fishers, often young men, to the bends. 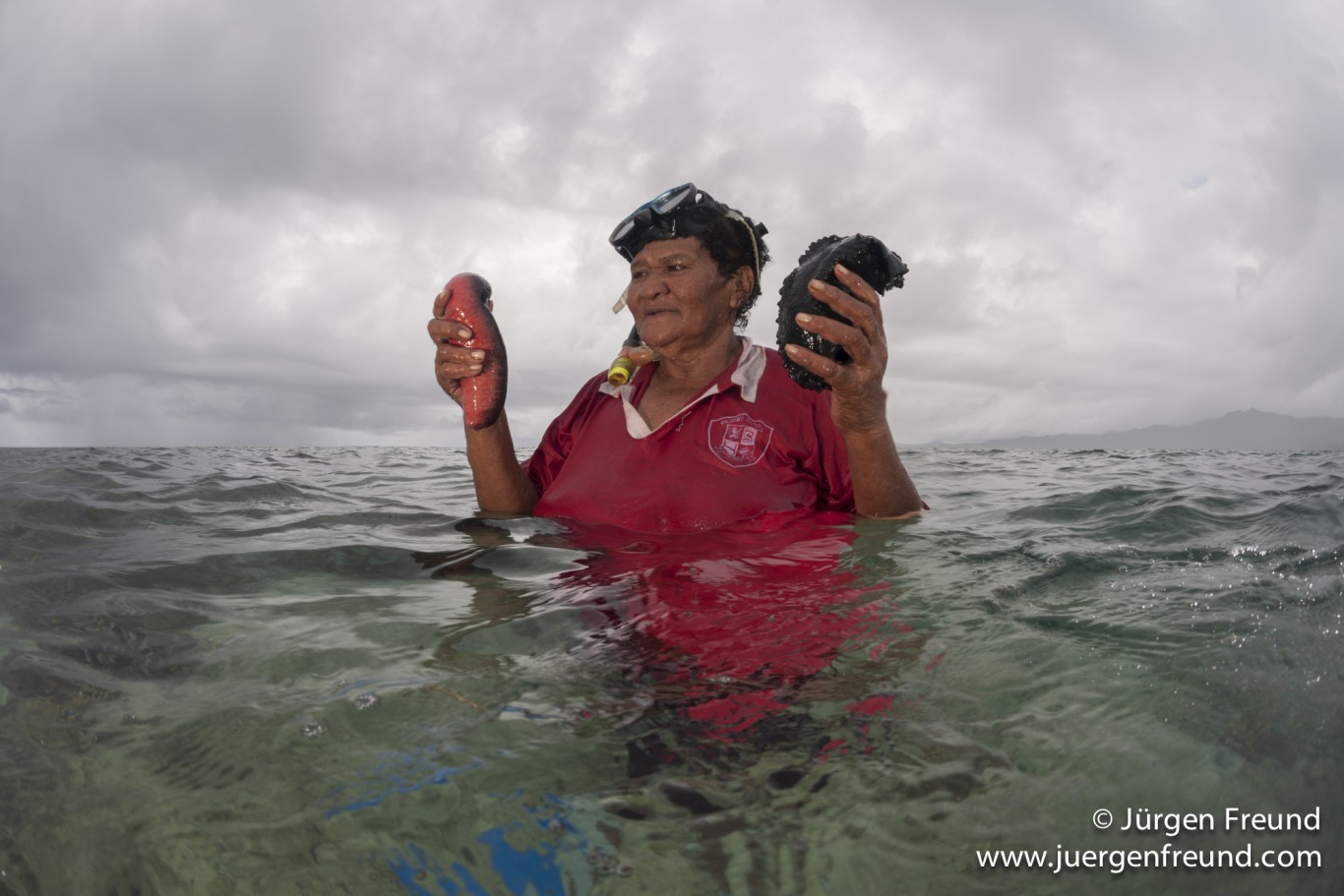 Sea cucumbers may look alien or even unpleasant to some eyes, yet they are extremely lucratrive. And like other seafood markets like bluefin tuna and grouper, buyers are willing to pay a premium for rare or very large specimens. Sandfish for example are a protected species, yet a recent report discovered sandfish being sold in a shop in Hong Kong for a whopping $1668 per kilo. Sea cucumbers are sometimes harvested by hand at low tide on the reef flats but sadly, diving for deep water species is fast becoming the norm as divers take ever greater risks for high value sea cucumbers, which can no longer be found in shallower waters due to overharvesting. 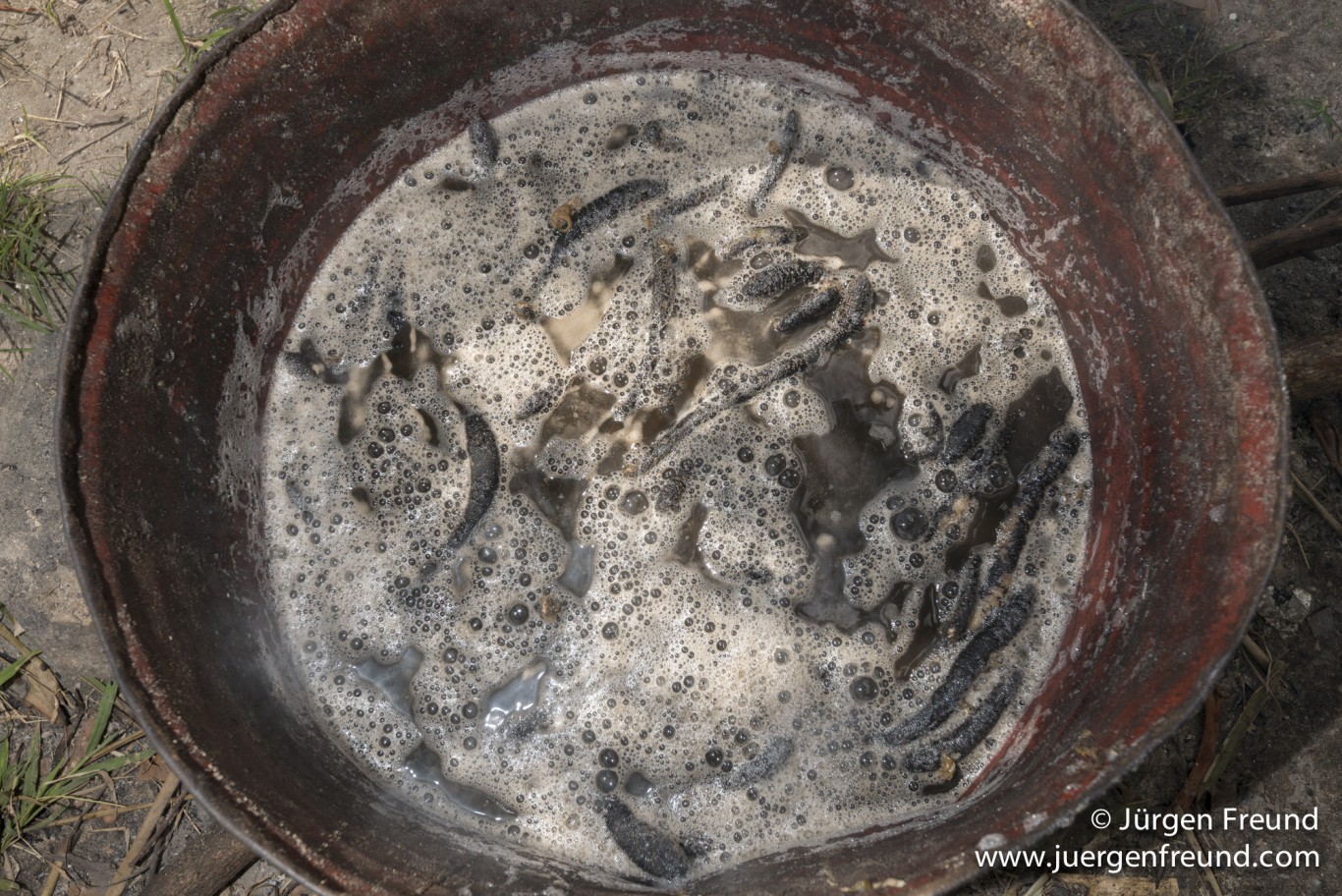 The problem is not just the disruption to a fishery that provides livelihoods and that could be managed sustainably - it's the impact on the marine environment. Scientists are only just beginning to understand these invertebrates and their role in the ecosystem...Sea cucumbers much like earthworms, filter all kinds of detritus and waste, excreting filtered sediment and calcium carbonate that forms the basis of new coral reefs. They also consume algae, preventing it from becoming too prolific. 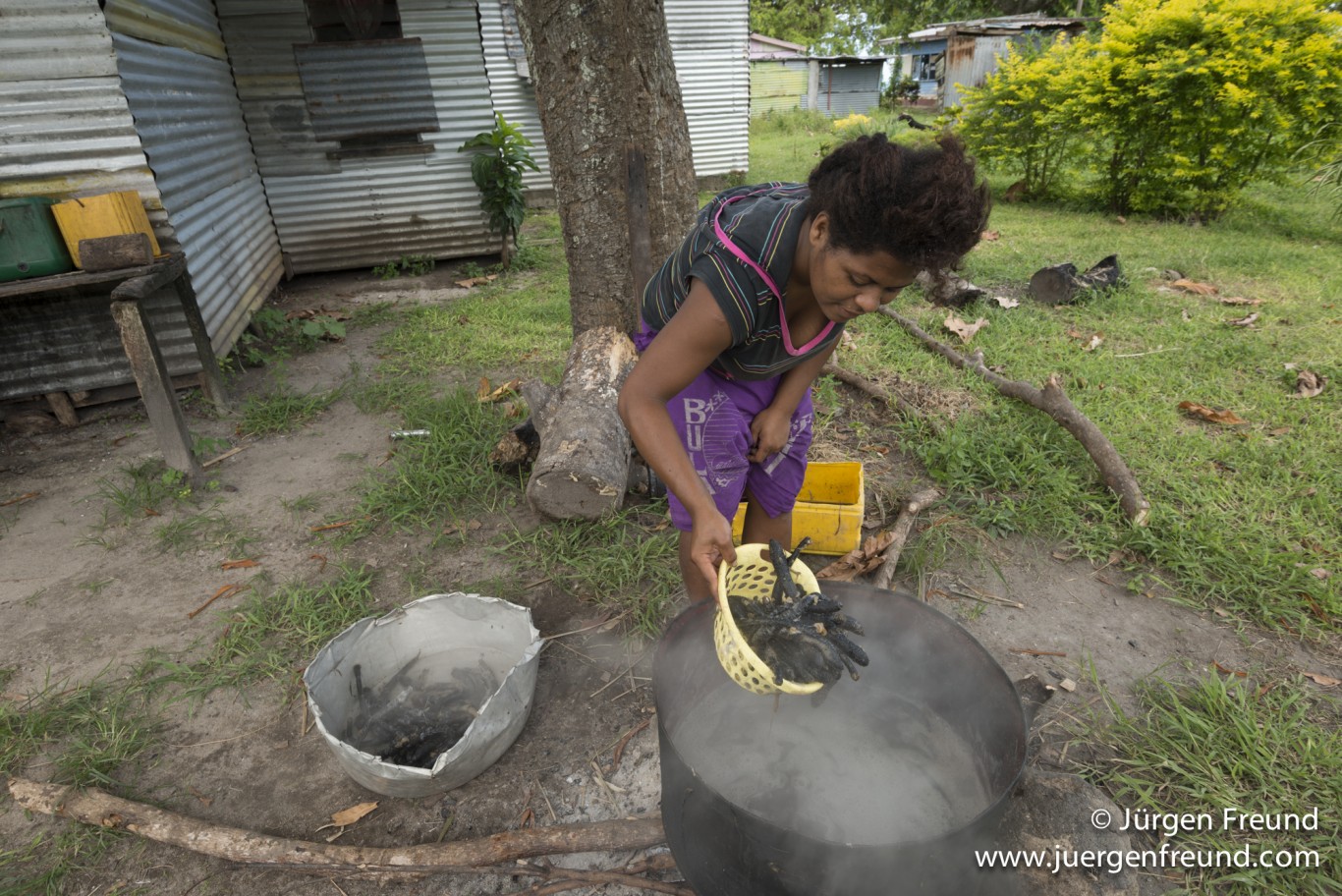 Sea cucumbers boiling on an open fire for half an hour before they are dried out in the sun in Kavewa Island. 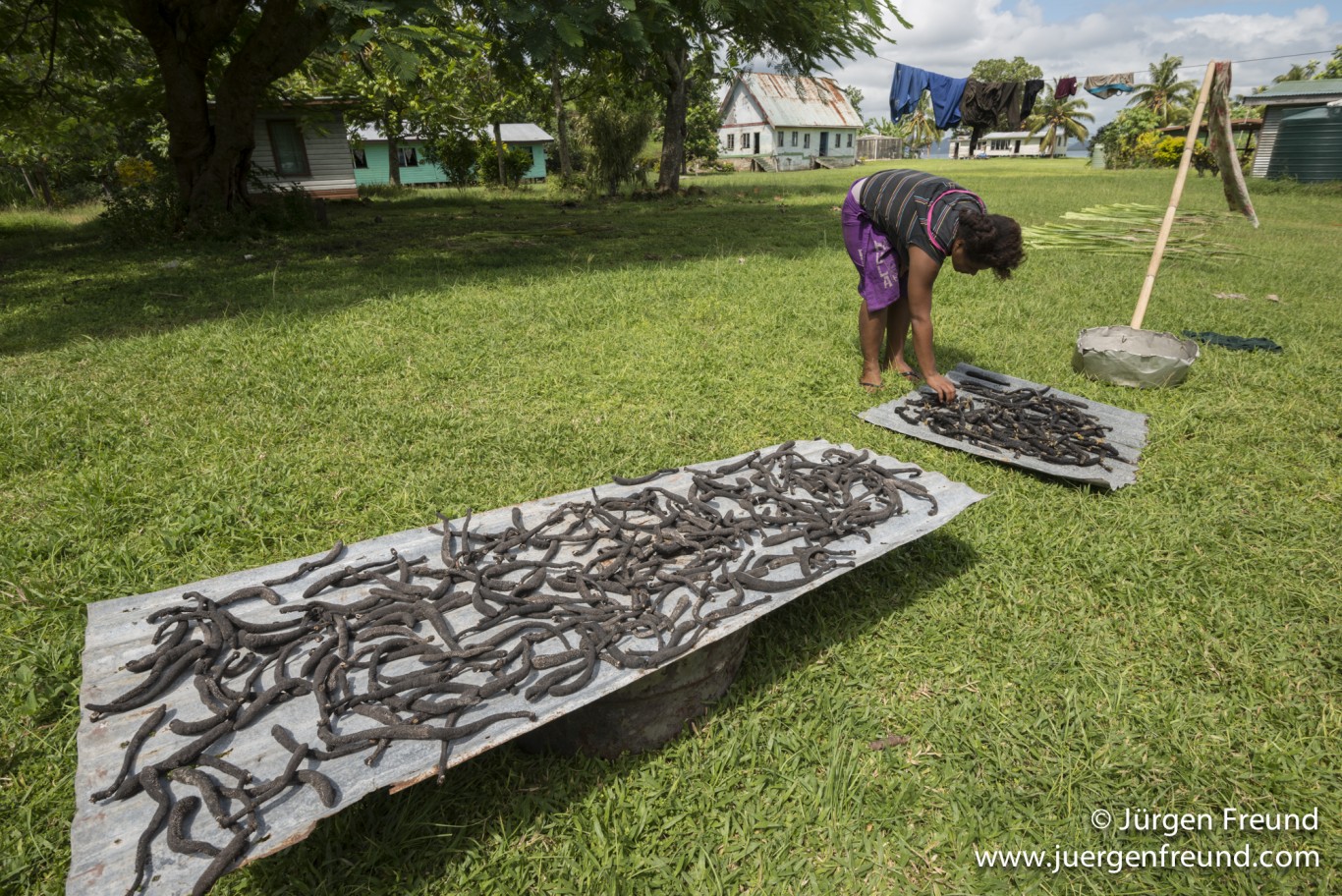 Drying or curing bêche de mer can take up to a week or even two weeks depending on their size and the weather conditions.

Storing dried bêche-de-mer does not require refrigeration. China, Hong Kong and Singapore are the main re-exporters and these countries are within easy reach of the Pacific Islands with the trade linked through regular shipping lines. 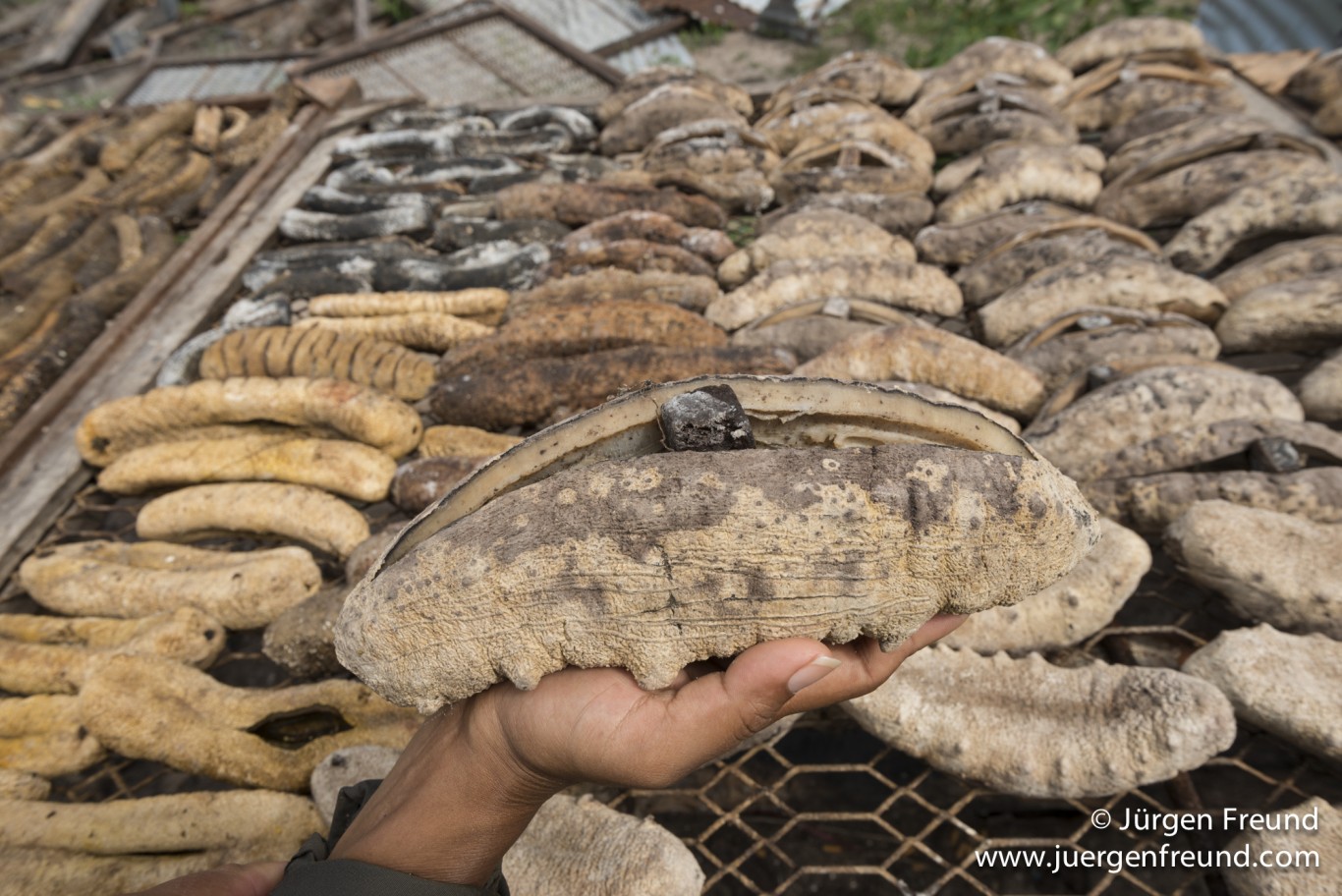 After the slitting and removal of their gut and gonad, the sea cucmbers are boiled twice before sun drying or sun-curing as it's sometimes called.

It's a sadly familiar tale of markets driving fisheries beyond their capacity, before science has a chance to assess the possible impacts. For example, recent research suggests that sea cucumbers help maintain alkilinity, a hugely useful ecosystem service in the context of ocean acidification, which threatens to cause mass coral reef bleaching. 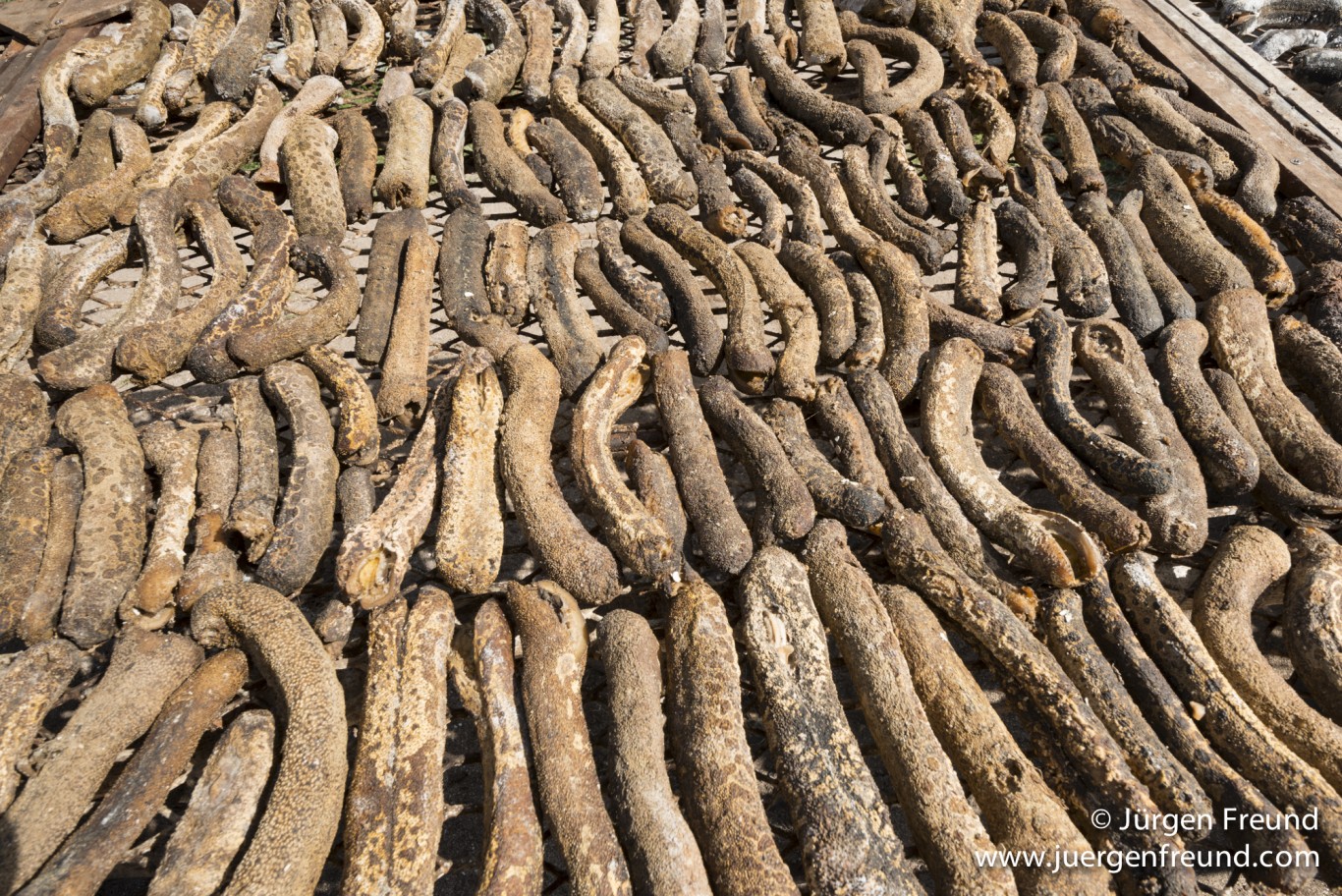 These sea cucumbers in the drying stage were taken from a dive camp in Yadua Island with 20 to 30 divers usually head out to the Great Sea Reefs to scuba dive for high grade sea cucumbers.

It is possible to manage sea cucumber harvesting sustainably, but it requires proper regulation, quotas and in some areas, moratoriums to allow stocks to recover. 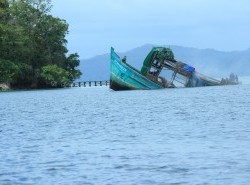 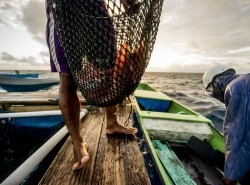 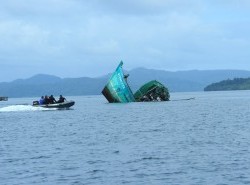