I'm on a boat floating right over one of the richest coral reefs in the Coral Triangle - Tubbataha. The same reef that both a US naval vessel and then a Chinese fishing boat managed to plough into in 2013. Until recently, the only way to properly assess the health of a coral reef system like this one was by getting in the water. But here we are, lowering a weird looking gadget into the water and remaining conspicuously dry in the process. The contraption is in fact a rod attached to an array of five Go Pro cameras and above it is a colourful kite. It's a simple innovation that is transforming the way we analyse coral reefs.

The DIY invention is an Automated Rapid Reef Assessment System, or ARRAS for short. “This camera array has five GoPro cameras, each taking a continuous video of the seafloor,” explains ARRAS Engineer Francis Corpuz. “Since they’re spaced a meter apart, the videos overlap, allowing us to stitch the images and rapidly generate a large picture of the damage.” We’re done in three hours – far more efficient than jumping in with measuring tools and slates.

Anchoring the northern tip of the Coral Triangle, the Philippines hosts 27,000 square kilometers of coral reefs. No one’s sure what the exact figure is because like forests, coral cover fluctuates yearly.  Beset by half-a-century of overfishing, coastal development and pollution, 40% of Philippine reefs are in poor condition, with just 1% rated excellent. Monitoring them has always been difficult. But ARRAS is changing all that.

“We developed ARRAS in 2010 to make marine fieldwork faster and more cost-effective,” explains ARRAS head Dr. Maricor Soriano. “We needed tools that were inexpensive, easy to build and durable. The recent surge of sturdy sports cameras like GoPros have greatly accelerated our work – allowing us to study reefs at a fraction of the cost. Images can be reviewed to minimize observer errors.”

A collaboration between a number of government departments, NGOs and the Worldwide Fund for Nature (WWF),  ARRAS was instrumental in assessing Tubbataha’s twin grounding scars last 2013. WWF has been working to protect the Tubbataha Reefs since 1996. While a typical square kilometer of healthy coral reef annually generates 65 metric tons of fish biomass, Tubbataha generates over 200 and constantly seeds the Sulu Sea with fish and invertebrate spawn. It's a shining example of how healthy reef ecosytems support livelihoods and economies if they're allowed to flourish and as such, it requires constant scrutiny.  “Technology-based tools like ARRAS give us an unprecedented glimpse of the state of coral reefs. This provides science-based data to guide our conservation efforts.”
Engineer Jaylord Jauod from the Mapua Institute of Technology prepares to deploy a kite. Its images will give researchers a bird’s-eye view of Tubbataha’s twin scar sites. Photo by ARRAS/WWF
ARRAS camera array prior to deployment. Measuring four meters in length and made of aluminum, PVC and engineering plastic, it sports five GoPro cameras which take continuous video Photo by ARRAS/WWF
What a healthy reef looks like. Tubbataha is one of the jewels of the Coral Triangle and a model of how a Marine Protected Area can be run. Photo by ARRAS/WWF
An aerial image from a sports kite of the damage from the Min Long Yu fishing vessel Photo by ARRAS/WWF
Teardrop cameras shoot six-second video clips of the seafloor, which are stitched to create a clear image of the target site. This system has been used to survey at least 22 coral reefs around the country Photo by ARRAS/WWF 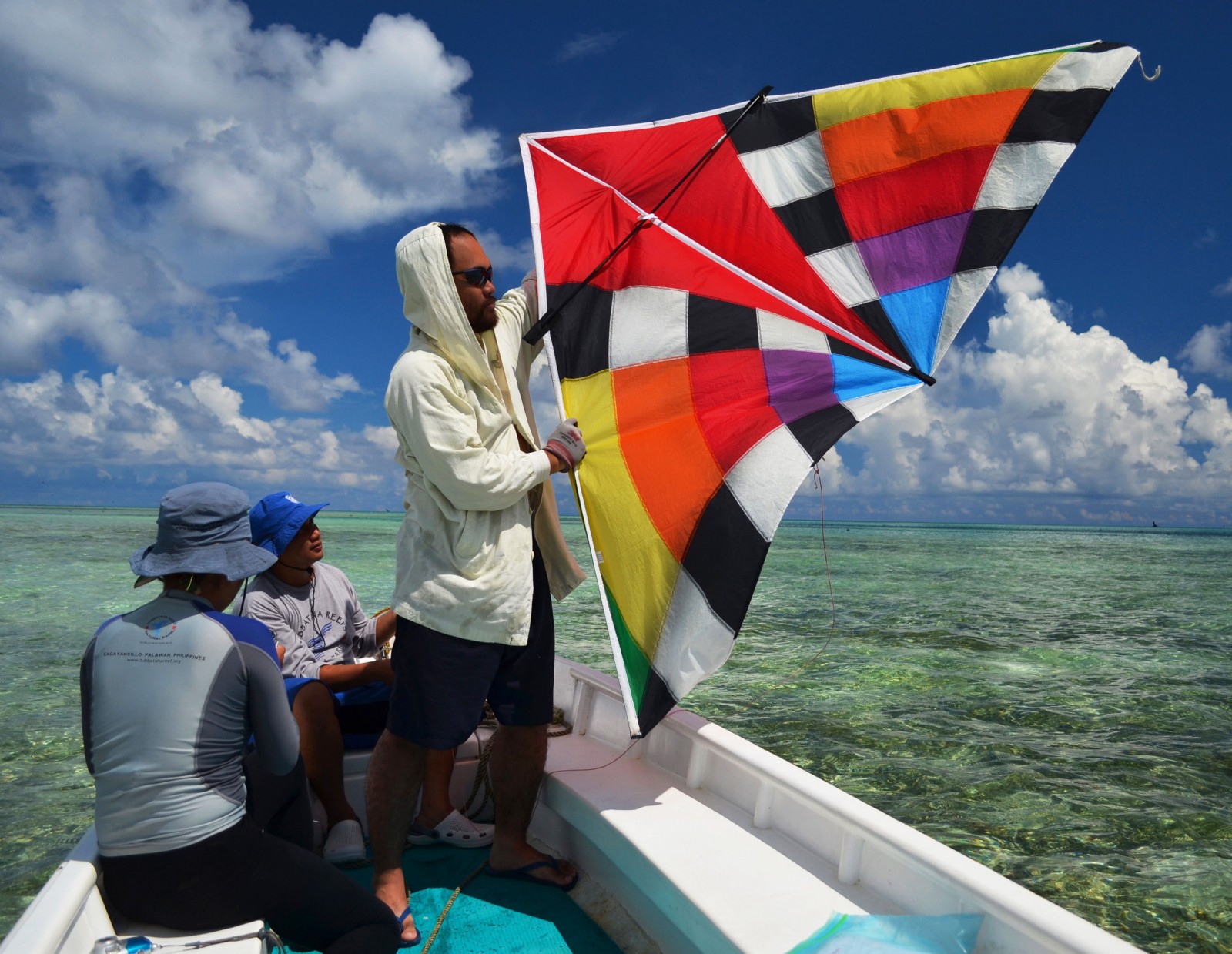 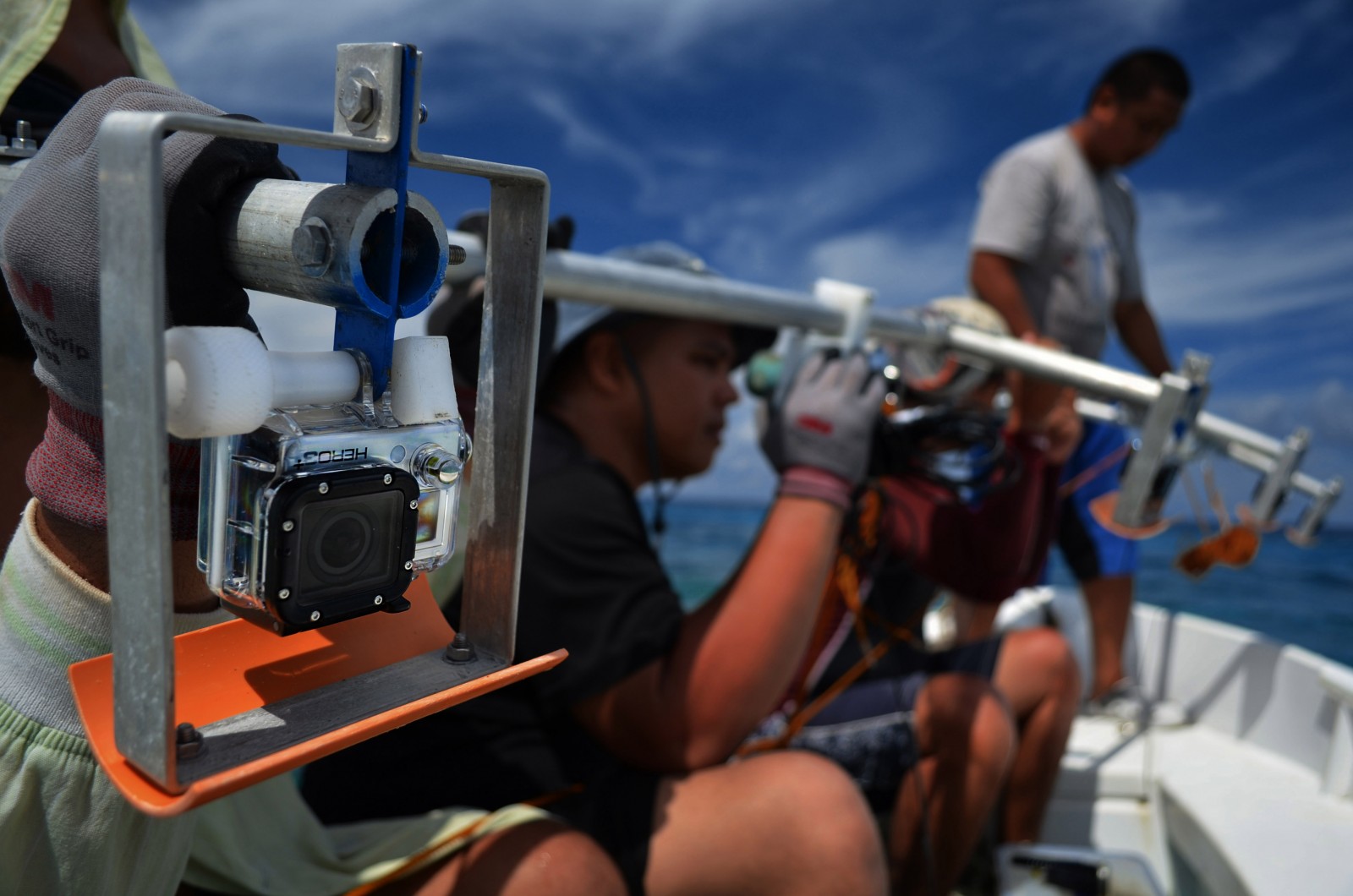 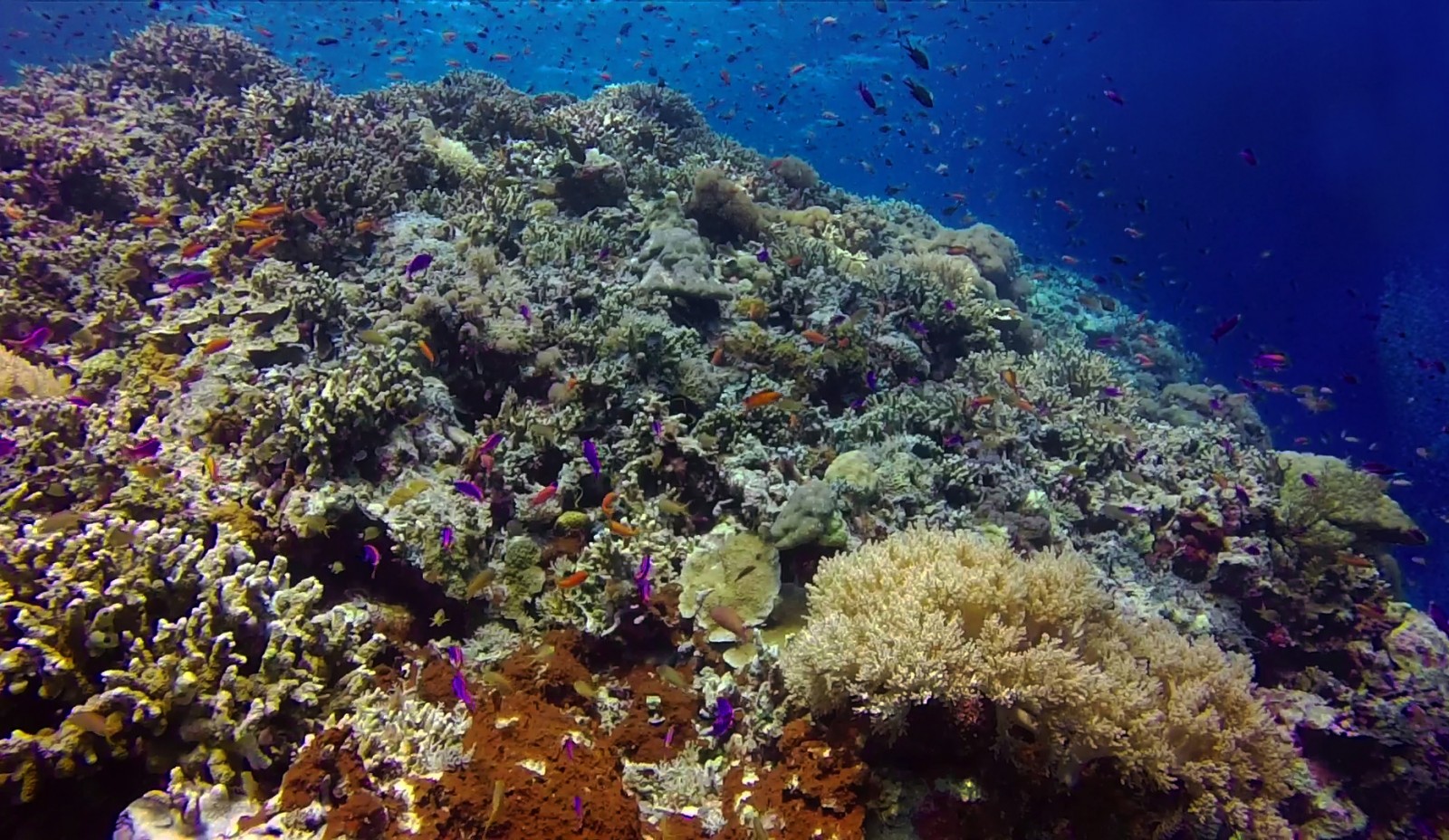 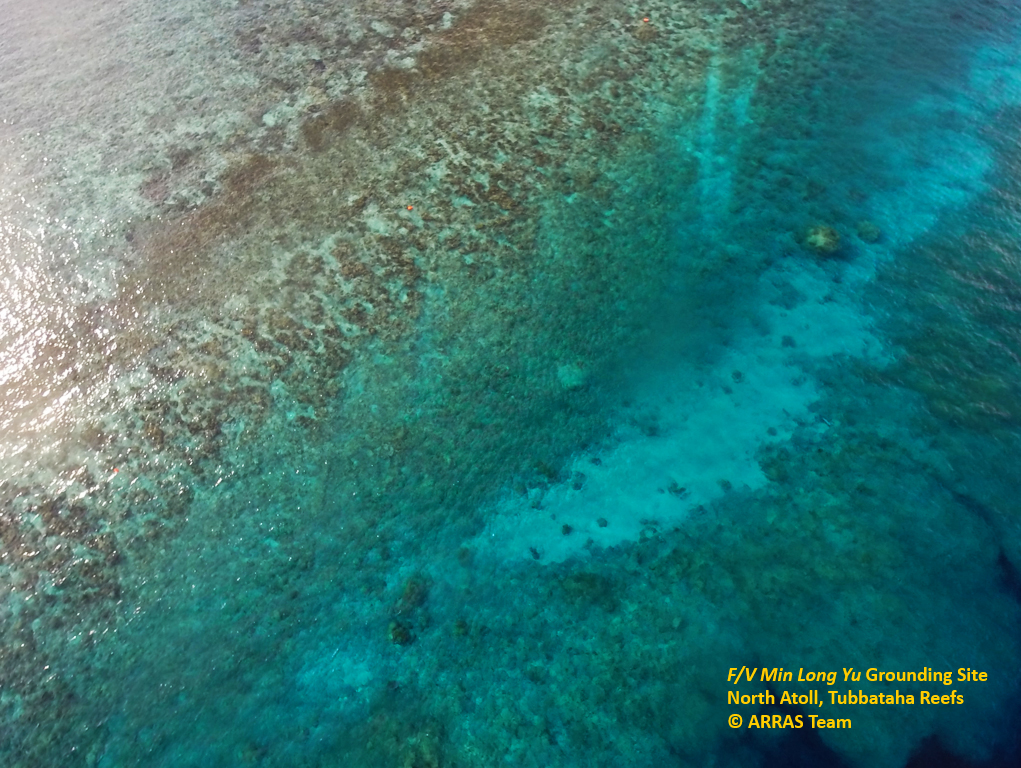 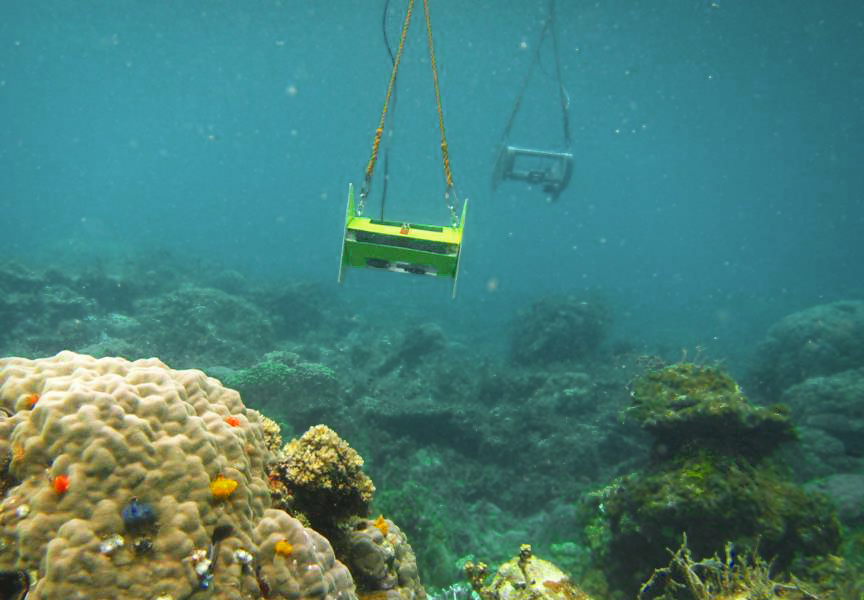 ARRAS currently uses three reef monitoring systems: the first uses a sports kite to provide bird’s-eye images of sites – perfect for damage assessments. A GPS unit, stabilizer and GoPro camera are rigged 50 feet below the kite, which is towed by a boat or led by a ground team. The camera shoots high-resolution pictures each half-second and needs just one perfect shot – right above target, with minimal glare or obstruction.

The second system is called the Teardrop from the shape of its plexiglass camera housing. Pulled along by a boat, it sports a GPS unit plus a GoPro camera, which takes six second video clips that are stitched to form a reef mosaic. Used for spots about five meters deep, teardrops have been used to survey at least 22 sites around the country.

The third and most impressive is the Camera Array – a four-meter aluminum rig featuring a GPS and five downturned GoPros spaced a meter apart. Each GoPro continuously shoots video, all stitched together to provide a comprehensive, easily-reviewable image of the seafloor.
The key to ARRAS is the ability to stitch and deduce data from images using cutting edge software developed by enginner Francis Corpuz. The stitched videos can be geotagged and directly uploaded to Google Earth.

A Race Against Time

The day’s work done, we review images aboard WWF’s research vessel, the M/Y Navorca. Dr. Soriano and I chat over a hot brew. “Our dream is to create an atlas of Philippine coral reefs by surveying 10,000 of the 27,000 square kilometers of Philippine reefs. Since 2010, we’ve covered about 400 square kilometers – but since many coastal habitats are in decline, it’s a race against time.”

One solution is to share ARRAS technology and skills to all 21 Philippine universities with marine science programs. “It will take us 1000 days to do this alone. With each school participating though, just 47 working days are needed. This is what we call citizen science – empowering schools, local governments and communities to both study and steward their own reefs. We can key in our maps directly onto Google Earth – meaning anyone can see how our reefs are doing. It is freeware – and a whole new way of looking at our seas.”

On her laptop, we study the grounding sites. The scars from both the F/V Min Long Yu (which in April 2013 obliterated 3902 square meters of North Atoll’s reefs) and the USS Guardian (which destroyed 2345 square meters of South Atoll in January 2013) are still fresh. I ask Dr. Soriano what she thinks of the damage. “Just give them time. Leave them alone, the way we let a damaged forest heal itself. Remember that the human timeframe is far different from the ecological timeframe. With protection, Tubbataha will recover. Nature is more resilient than we think.” ARRAS will allow us to witness this process of recovery - and to better understand what we are losing and what can be saved elsewhere.