INTO THE TWILIGHT ZONE

At a spot that looks no different at the surface than the rest of the swirling blue-black that surrounds the bright yellow Filipino banca, two stoutly built crewmembers heave a 50-pound sandbag into the water and watch as nearly 300 feet of rope whiz past. When the line stops, they tie it off to two empty 20-gallon plastic drums and toss those overboard as well. These makeshift buoys are meant to mark the entry point for a deep-water dive team’s blue-water descent into a small section of what just may be the least explored strip of real estate on Earth: the “twilight zone.”

The twilight zone is a region of depth between 200 and 500 feet below the surface. This narrow band—well beyond recreational dive limits and far above the deep trenches researchers explore when they have submarines and ROVs at their disposal—has been visited by just a few dozen daring explorers throughout the world, and many fewer scientists. That fact coupled with the unique conditions and habitats found at these depths make the mesophotic coral ecosystems of the twilight zone a treasure trove of novel biodiversity and a source of countless unanswered scientific questions.

“About half of what we find down there is new,” says Luiz Rocha, a curator of ichthyology at the California Academy of Sciences. “We don’t know how those species interact with the shallow ones or how that ecosystem is linked to the shallow reefs.” And more importantly, he says, “We might be losing it before we know what’s there.”

Understanding the role the twilight zone plays in marine ecosystems is important in many parts of the world, but few places more so than here. On this day, Rocha and the rest of this elite five-member deep-water dive team are about a quarter mile off the northwest tip of Philippines’ Verde Island, near the apex of Coral Triangle. They are part of an ambitious expedition mounted by the California Academy of Sciences—in collaboration with government agencies, conservation organizations, and academic institutions from the Philippines and the U.S.—to assess the astounding biodiversity of the Verde Island Passage. This narrow channel sandwiched between the islands of Luzon and Mindoro is considered by many to be the most biologically diverse marine ecosystem on the planet—the “center of the center of marine biodiversity.”

While the rest of the expedition’s scientific divers have been exploring the area’s shallower habitats above a depth of 130 feet or so, the deep team has been plunging hundreds of feet below the surface and discovering new organisms practically everywhere they’ve gone.

Conditions at today’s dive site, known as “Blackfish Corner,” are no less spectacular. Having descended a gradual moonscape slope of sand and rubble, the team reaches a ledge at 250 feet that opens steeply toward the center of the Earth. As they spill over the edge, they feel the temperature drop as precipitously as the grade and watch as their dive lights cut through the near darkness to reveal a world unlike anywhere else on the planet.

Gorgeous soft corals and sea fans wave in the current, perfectly adapted to life without photosynthesis; multicolored comb jellies, which swim freely in other parts of the ocean, cling to wire corals and strands of discarded monofilament like socks hanging on a line; and bizarre crabs, urchins, and nudibranchs cruise the bottom in search of their next meal. And then there are the fish. Like the daydream creations of a child left with nothing but the brightest crayons in the box, twilight zone fish are some of the most beautiful things you’ve ever seen. In full light, they practically glow in hues of red, pink, orange, and yellow. 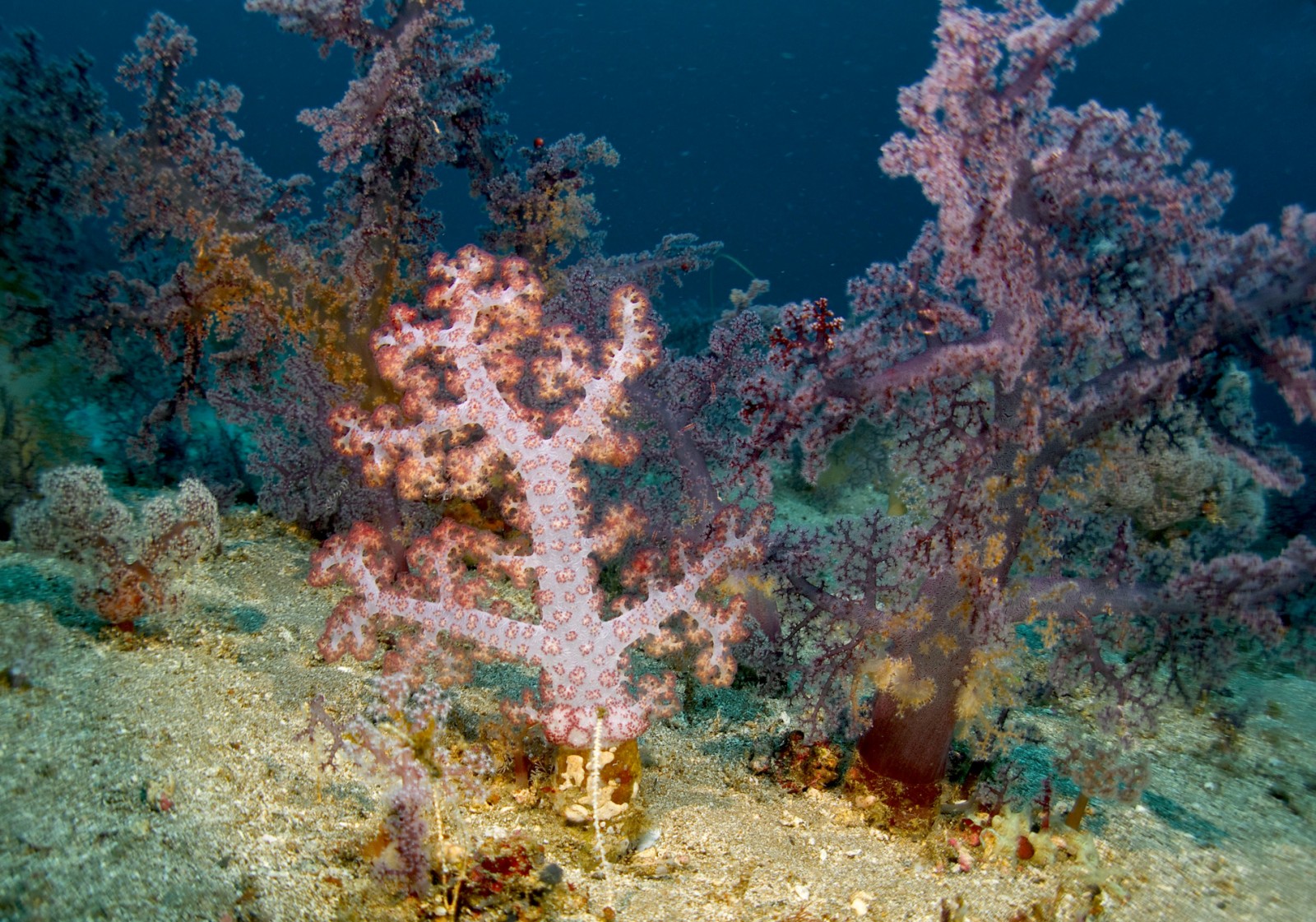 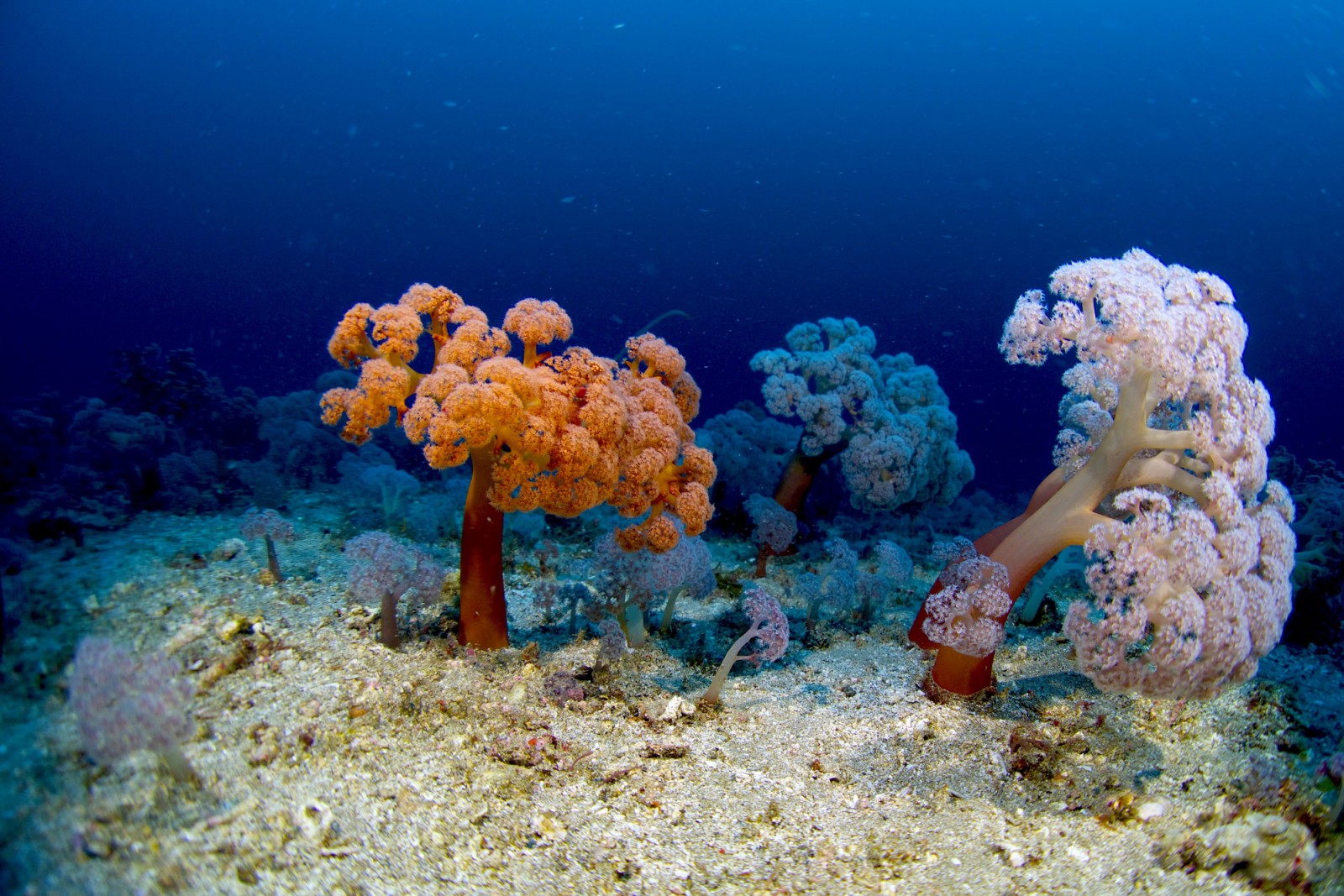 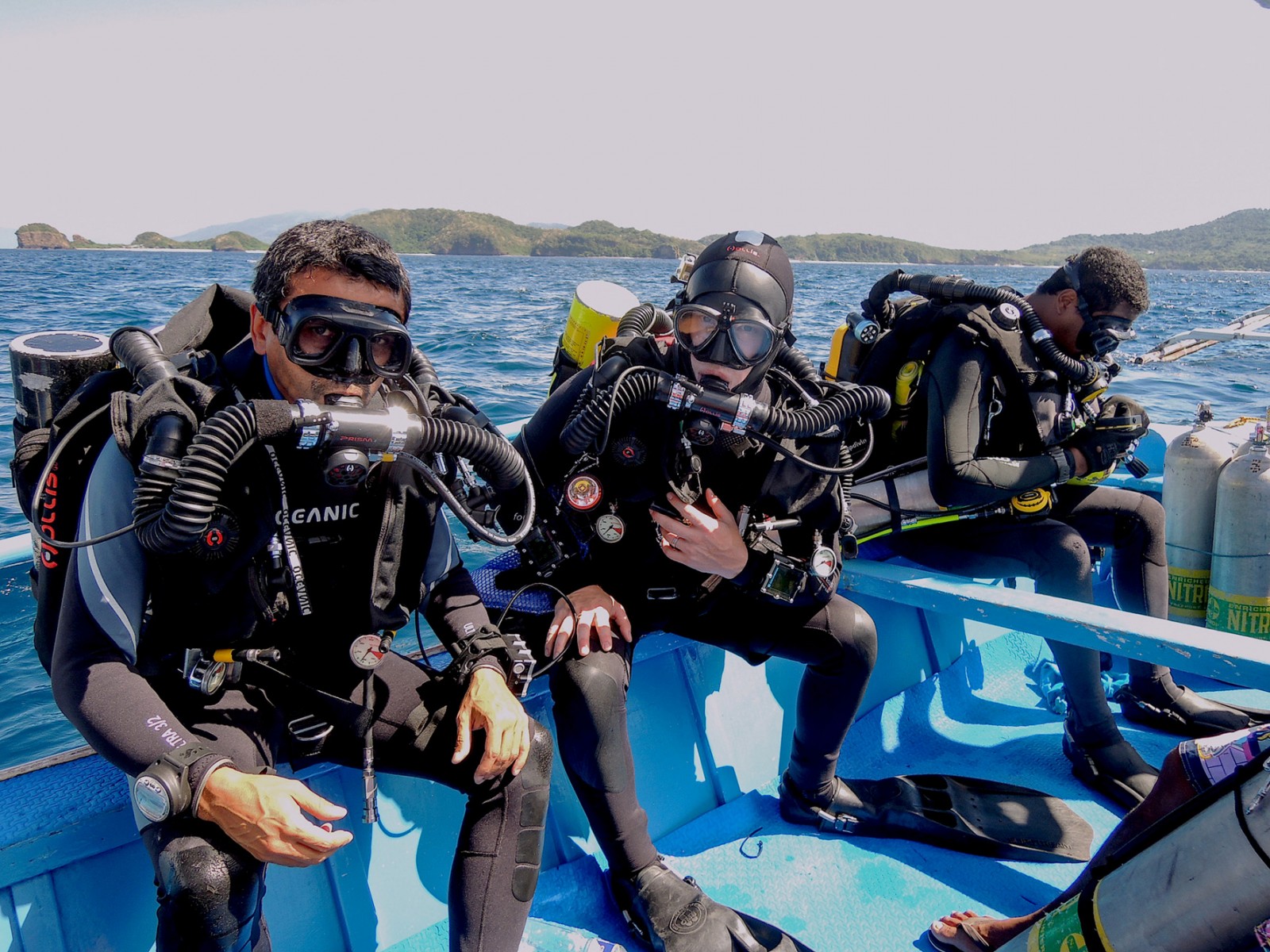 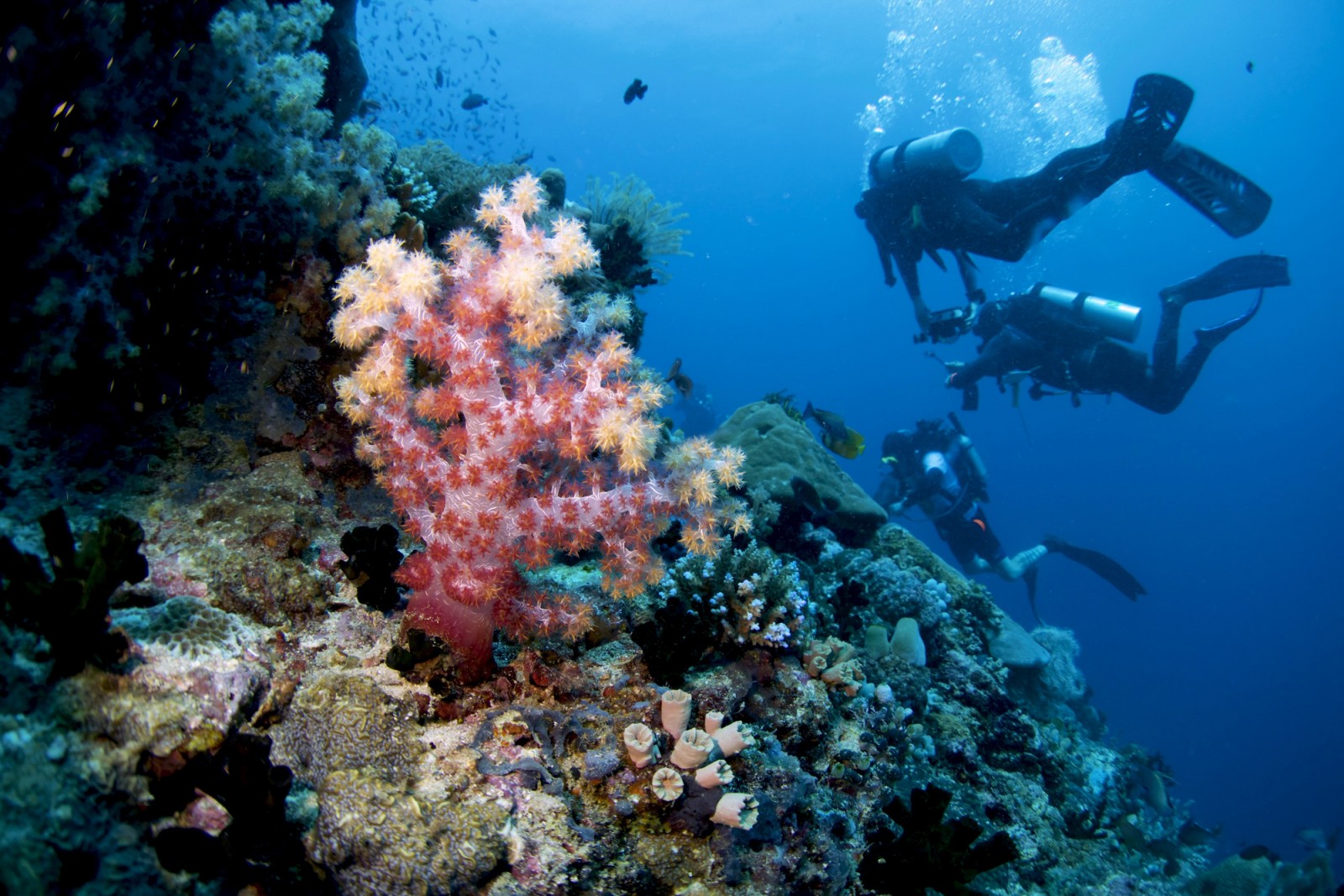 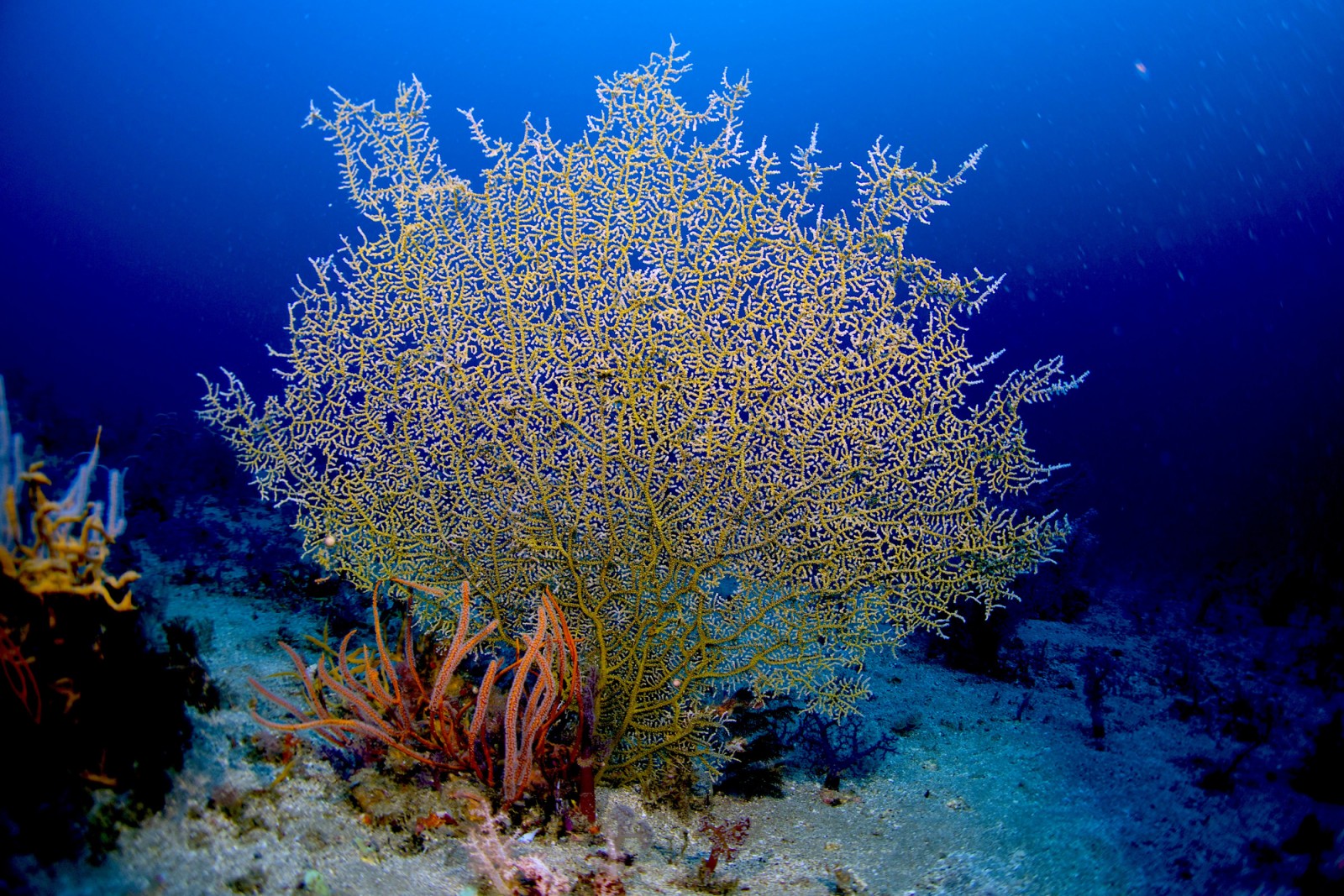 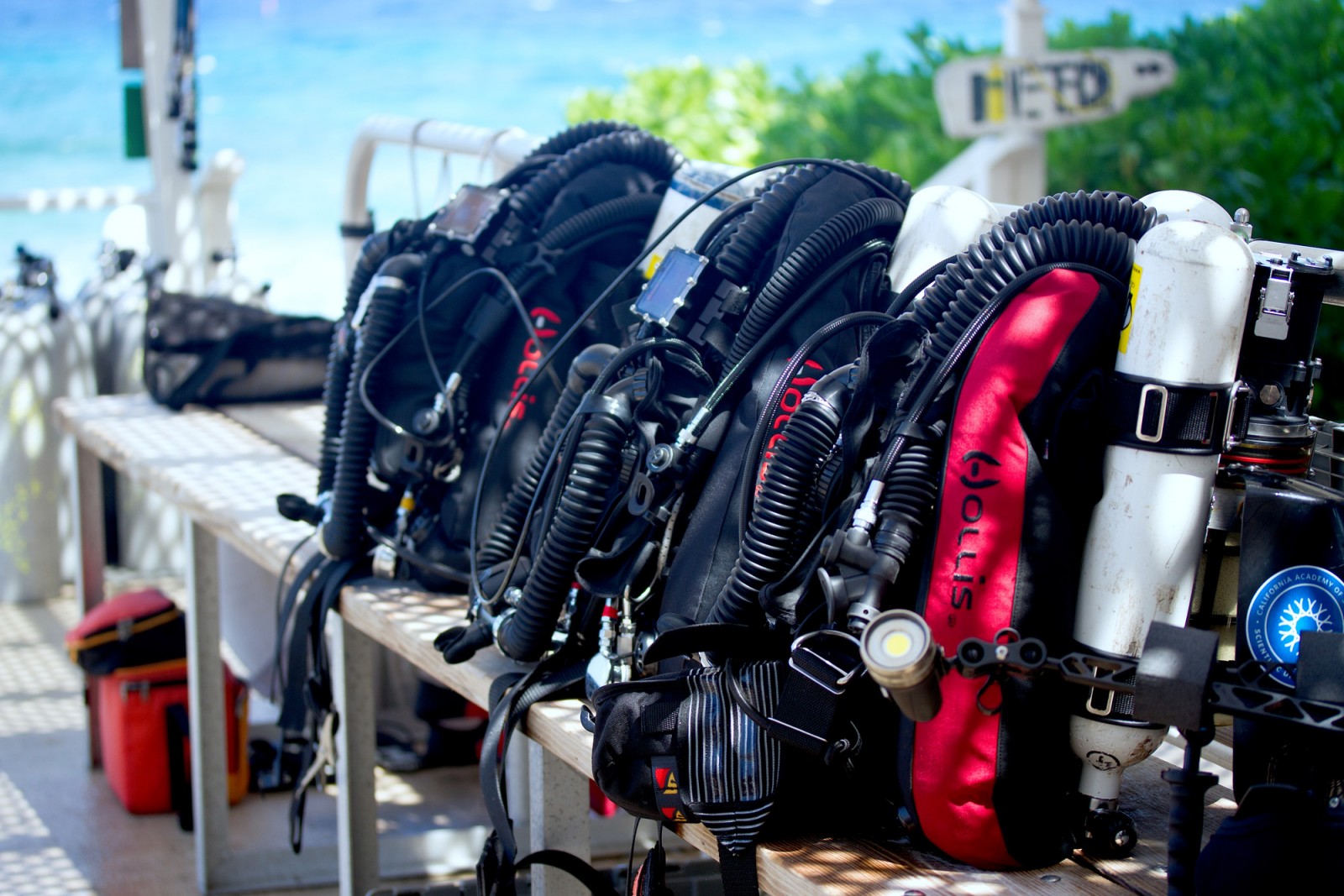 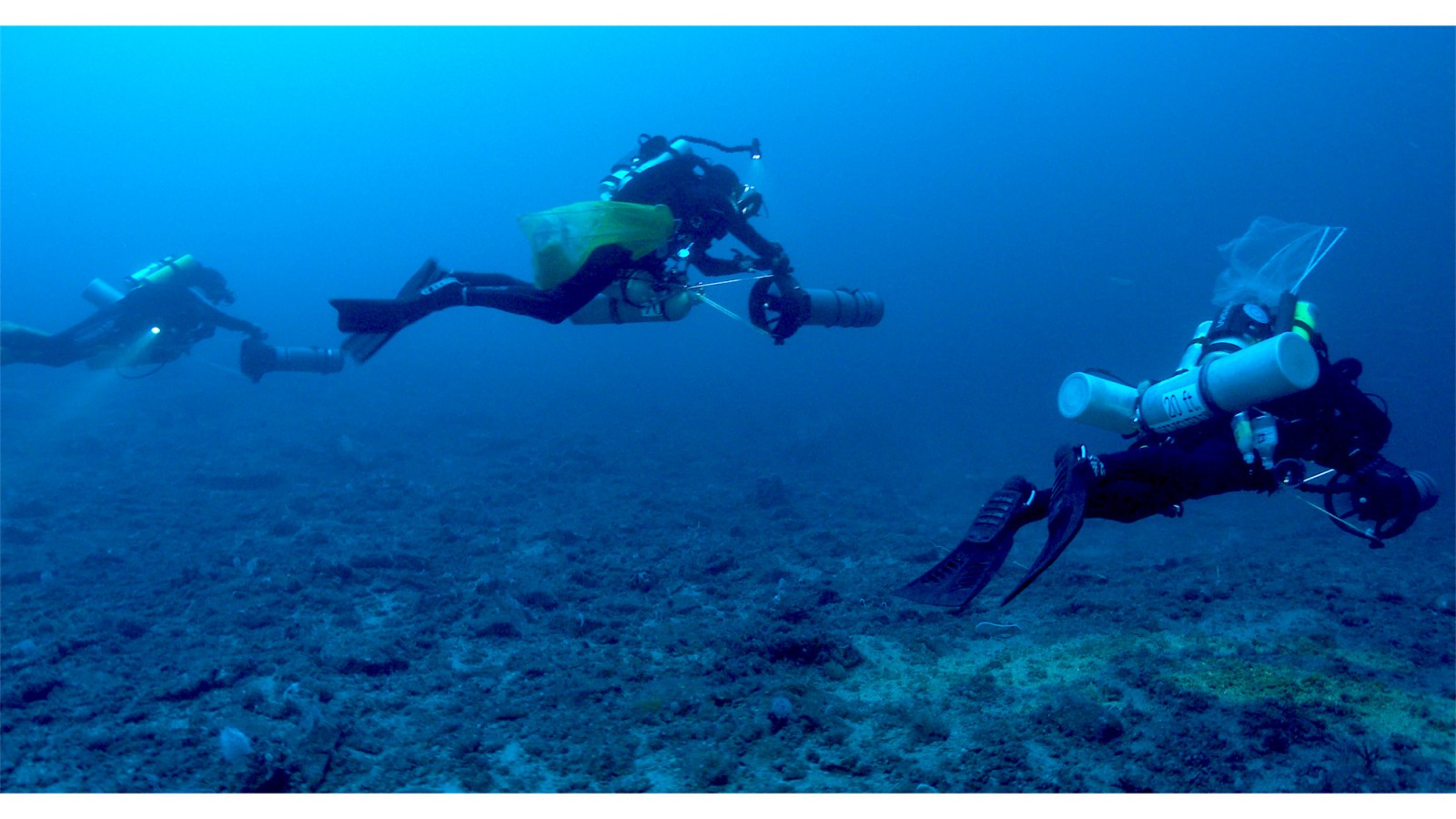 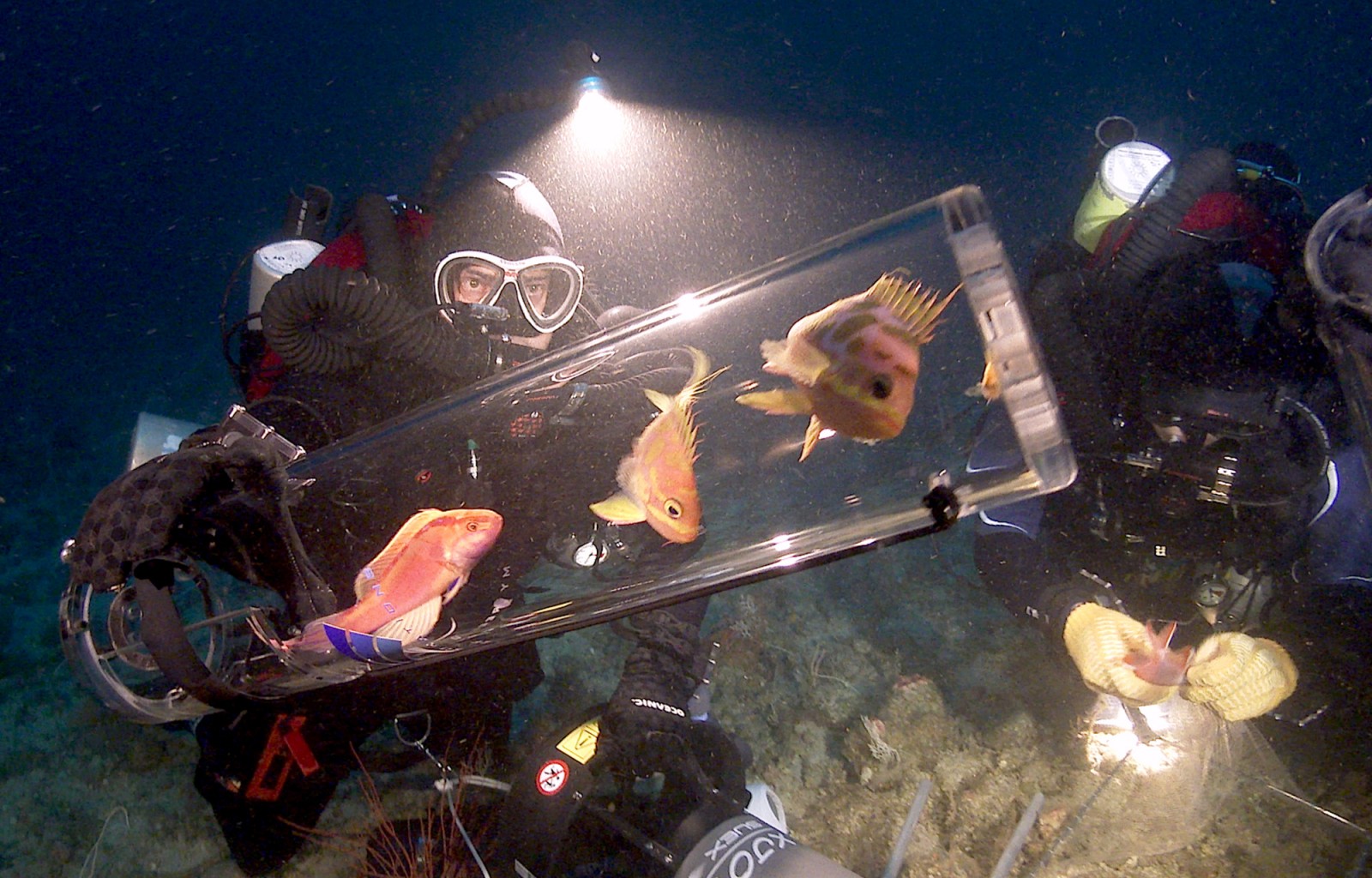 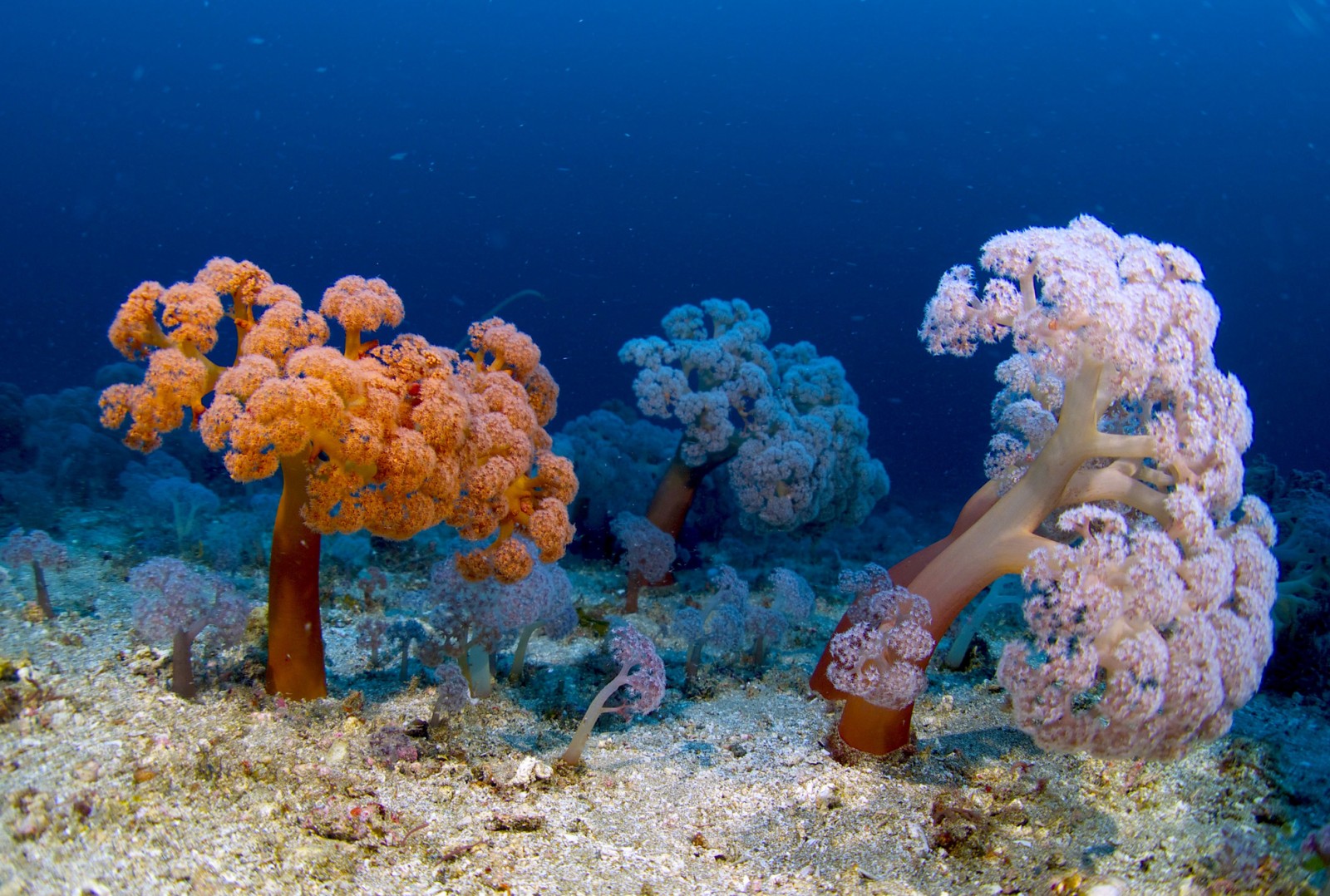 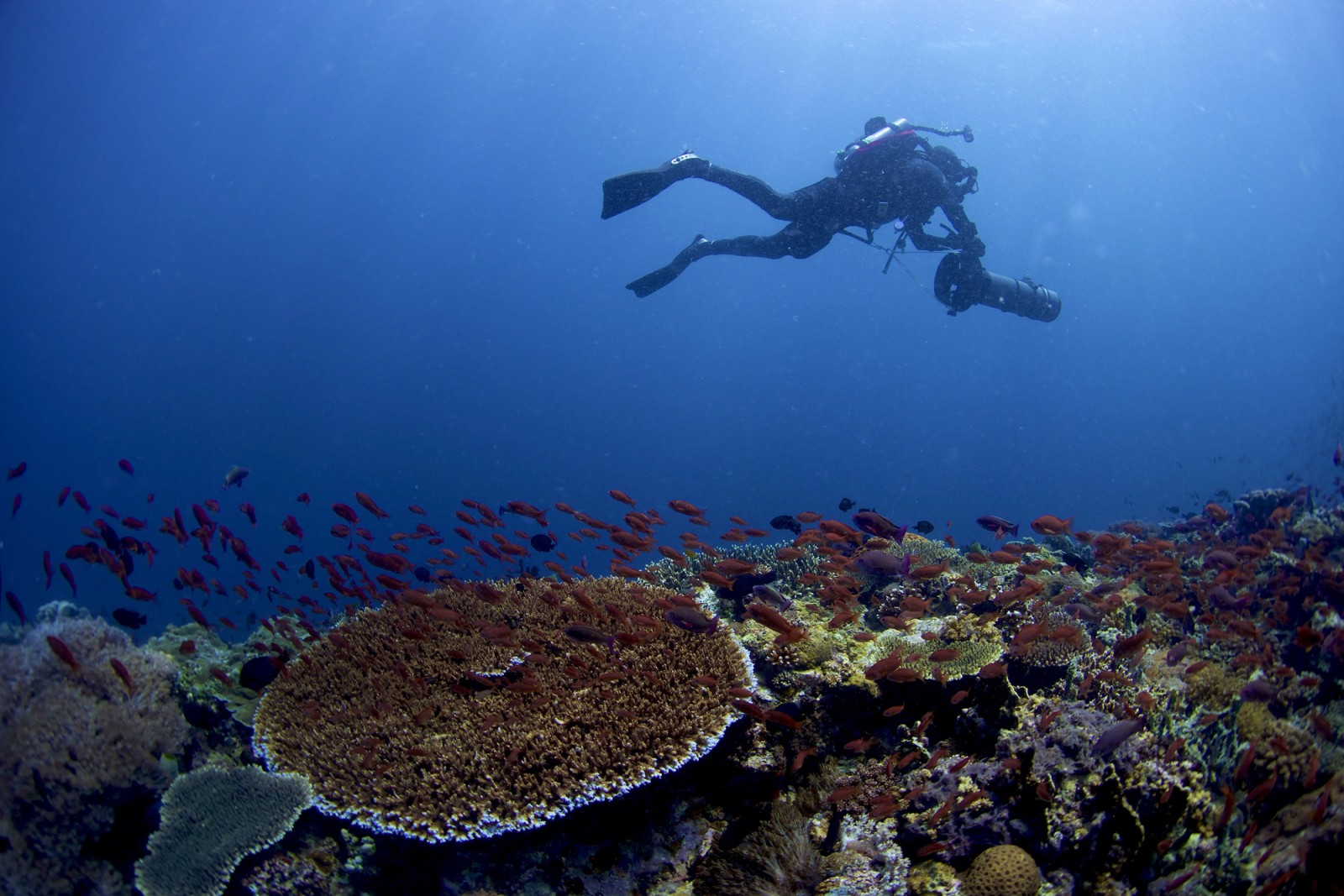 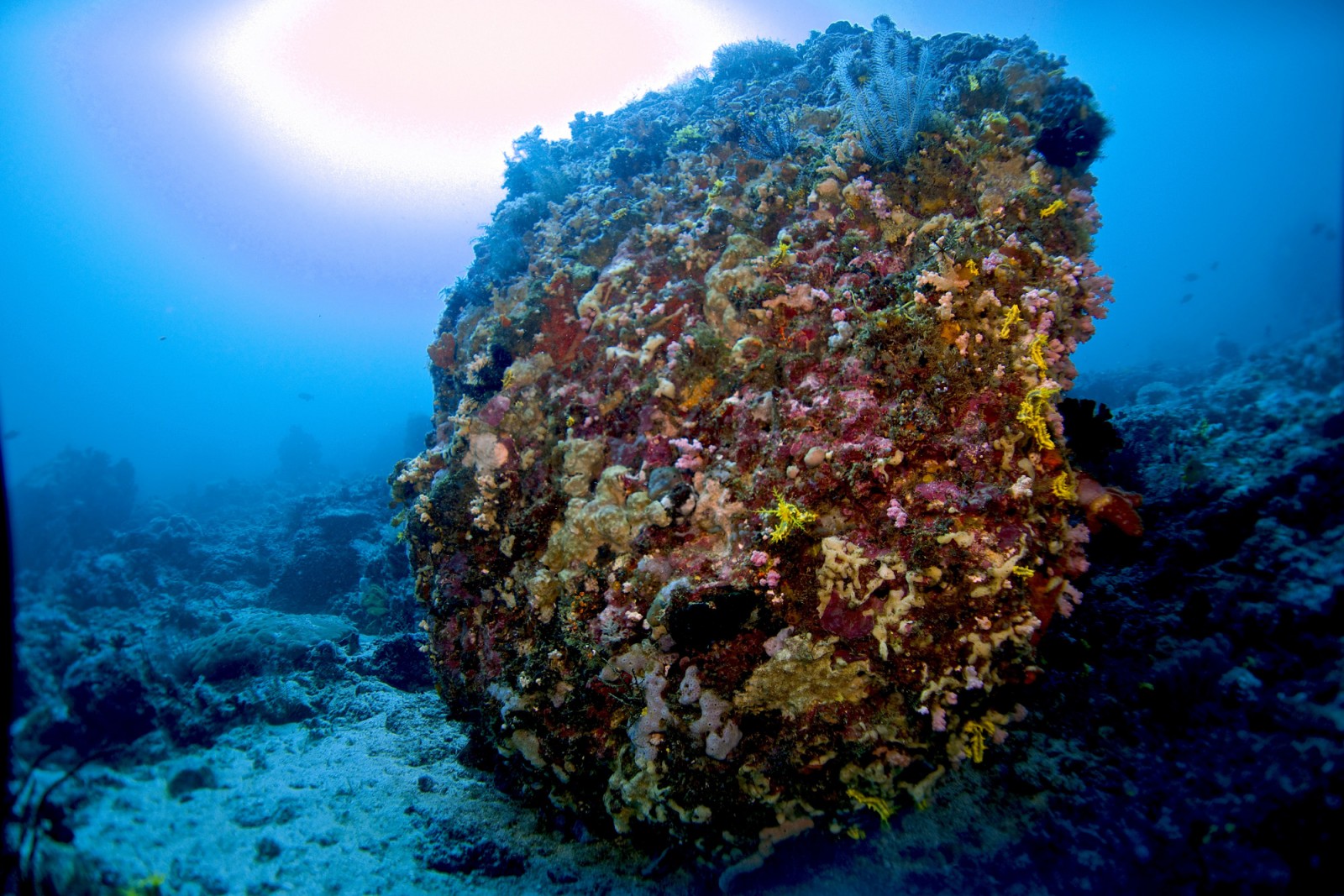 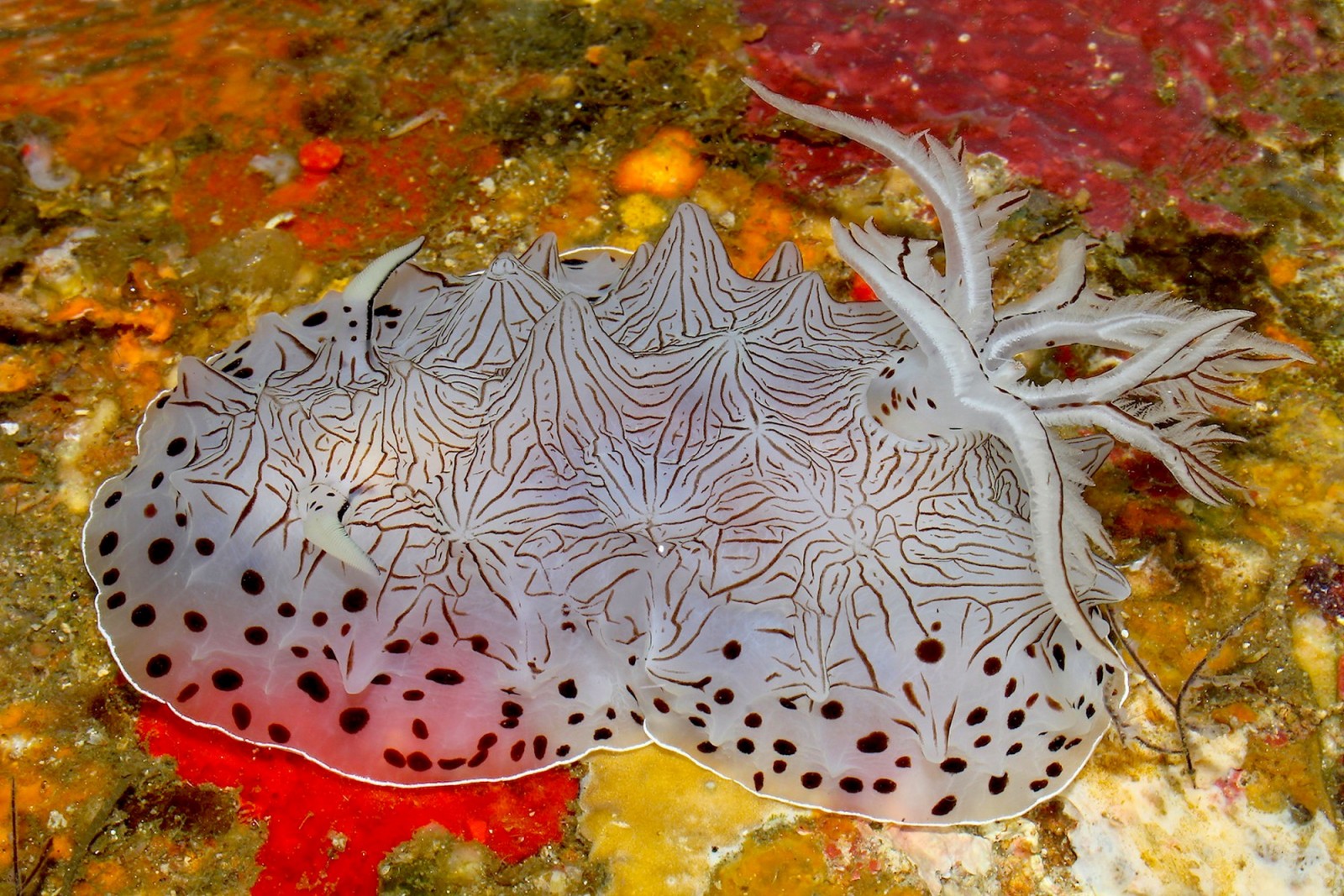 On any one of these trips into the twilight, the rate of new-species discovery can top 10 per hour. You can imagine why a diver might be tempted to stay as long as possible, to linger and simply take in this cold, bizarre, light-starved world. But there are other forces at work, namely the desperate need to manage risk in this inherently risky endeavor and to keep decompression time down to a reasonable number of hours.

There’s a lot more to the risks of deep diving than the obvious distance it puts between the diver and that unlimited supply of air at the surface. The pressure that goes hand in hand with depth does bizarre things to one’s physiology, particularly in relation to the air we breathe. Every 33 feet of depth stacks one whole atmosphere’s worth of pressure on top of a diver. That pressure compresses everything, gases in particular—so much so that a lungful of air at 500 feet contains 12 times as many molecules as the same breath at the surface. That’s 12 times the number of molecules pushing into a diver’s tissues and being absorbed by the blood, which is almost exactly 12 times too many.

At depth, the 21-percent concentration of life-giving oxygen we breathe on land quickly becomes toxic and seizure-inducing. The other chief component of air, nitrogen, starts to have a narcotic effect somewhere beyond about 90 feet. Seizures and narcosis are two conditions you most definitely do not want hundreds of feet underwater. To prevent both, the divers use an advanced breathing system that dilutes the standard percentages of oxygen and nitrogen with helium, an inert gas that has none of the toxicity and narcotic effects of the other two gases. This closed-circuit system, known as a “rebreather,” also scrubs carbon dioxide from air the diver exhales and recycles oxygen, which allows for longer dive times. A sophisticated onboard computer monitors the mix of gases in real-time and meters out just enough oxygen to keep a diver conscious, clear-headed, and seizure-free.

Of course all of the extra gas absorbed into the tissues while at depth has to go somewhere as a diver heads toward the surface. The deeper you dive, the longer you stay, and the harder you work while down there, the more gas the tissues absorb and the more will be looking to escape on your way back up. Ascend too quickly and dissolved nitrogen boils out of solution and forms bubbles in the tissues and blood, causing the painful and sometimes-life-threatening condition known as decompression sickness or “the bends.” The only reliable prevention for the bends is a slow ascent. That means hours spent decompressing at increasingly shallow depths in exchange for 30 or 40 minutes mucking around in the twilight zone.

It’s now been just over two-and-a-half hours since the team entered the water. Having explored a relatively modest maximum depth of 300 feet, they’re still facing at least another hour of decompression. By the time they surface, they’ll be dehydrated and hungry, but ecstatic about what they’ve seen and been able to collect, including a number of live fish brought up in mini decompression chambers designed by Steinhart Aquarium biologists specifically for this purpose.

Spectacular as their finds may be, the team is well aware that this most recent trip into the twilight has provided only the briefest of glimpses into a world we know almost nothing about. They know that they and others will need to string together a very long series of such snapshots to even begin to understand these twilight zone ecosystems, the role they play in ocean health, and what we need to do to protect them.

“Nobody even knows where they are, so often they’re not even included in marine protected areas,” says Rocha. It’s a problem that he and the divers here are working hard to resolve, one long decompression dive at a time.

Steven Bedard is Senior Science Editor at the Califiornia Academy of Sciences.

Some material in this story was originally published in “The Richest Reef” blog series by Scientific American.