“AquAdvantage® Salmon...advanced hybrid salmon designed to grow faster.” Could you get a starker strapline for the commodification of fauna? As the challenges of feeding an exploding global population continue to grow, branded animals like these GM salmon produced by biotech company Aquabounty Technologies could be commonplace, but what about the dangers? GM salmon made headlines recently, with some fearing threats to wild stocks in the Atlantic if they were to escape.

Hybrid grouper on the other hand get almost no media attention, yet they potentially pose a far greater danger.  Hybridization is big business in South East Asia, where aquaculture businesses are interbreeding valuable grouper species  in a bid to create a fast growing  super fish.

Live grouper are highly prized in Hong Kong, Mainland China, Taiwan and other parts of South East Asia. They crowd tanks in seafood restaurants and are ubiquitous at Chinese wedding banquets and other formal occasions, where tradition demands they are served. Grouper can  sell for more than US$100 a kilo and very large or rare specimens for much more. The market is huge - in Hong Kong alone, a staggering 3.6 million grouper are consumed each year.

But demand has led to rampant overfishing across South East Asia’s Coral Triangle bioregion.  Fishermen often use cyanide to stun fish, destroying coral reefs in the process. According to a recent University of Hong Kong study, one in ten grouper species face extinction if current trends aren’t arrested.

On the face of it, advanced aquaculture techniques offer a way of fulfilling market demand while reducing the pressure on wild populations. Grouper are nurtured first in hatcheries from cultivated eggs and then in coastal cages or sometimes factories on land. The goal of hybridization is to achieve the holy trinity of rapid growth rates, resilience and superior taste.

“Hybridization of grouper isn’t new,” says Geoffrey Muldoon, a marine biologist with the World Wildlife Fund (WWF) “In 1996 the University of Malaysia in Sabah, Borneo produced a giant grouper/tiger grouper, dubbed the Sabah Grouper specifically for live reef fish food markets in Hong Kong,” he explains. The hybrid was a huge success with consumers and a boom followed. “Fast forward almost two decades and the science of grouper hybridisation has exploded,” says Muldoon. 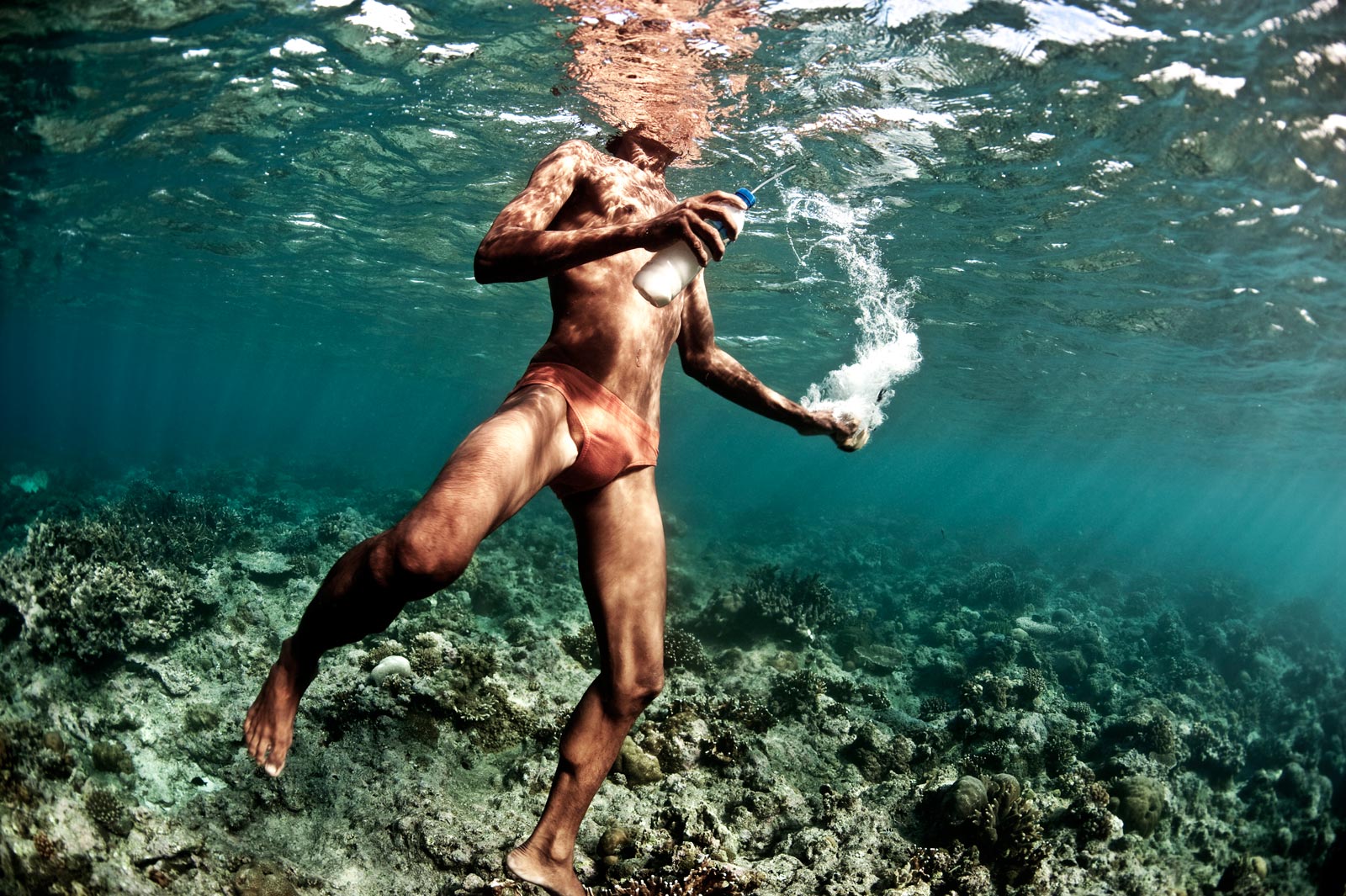 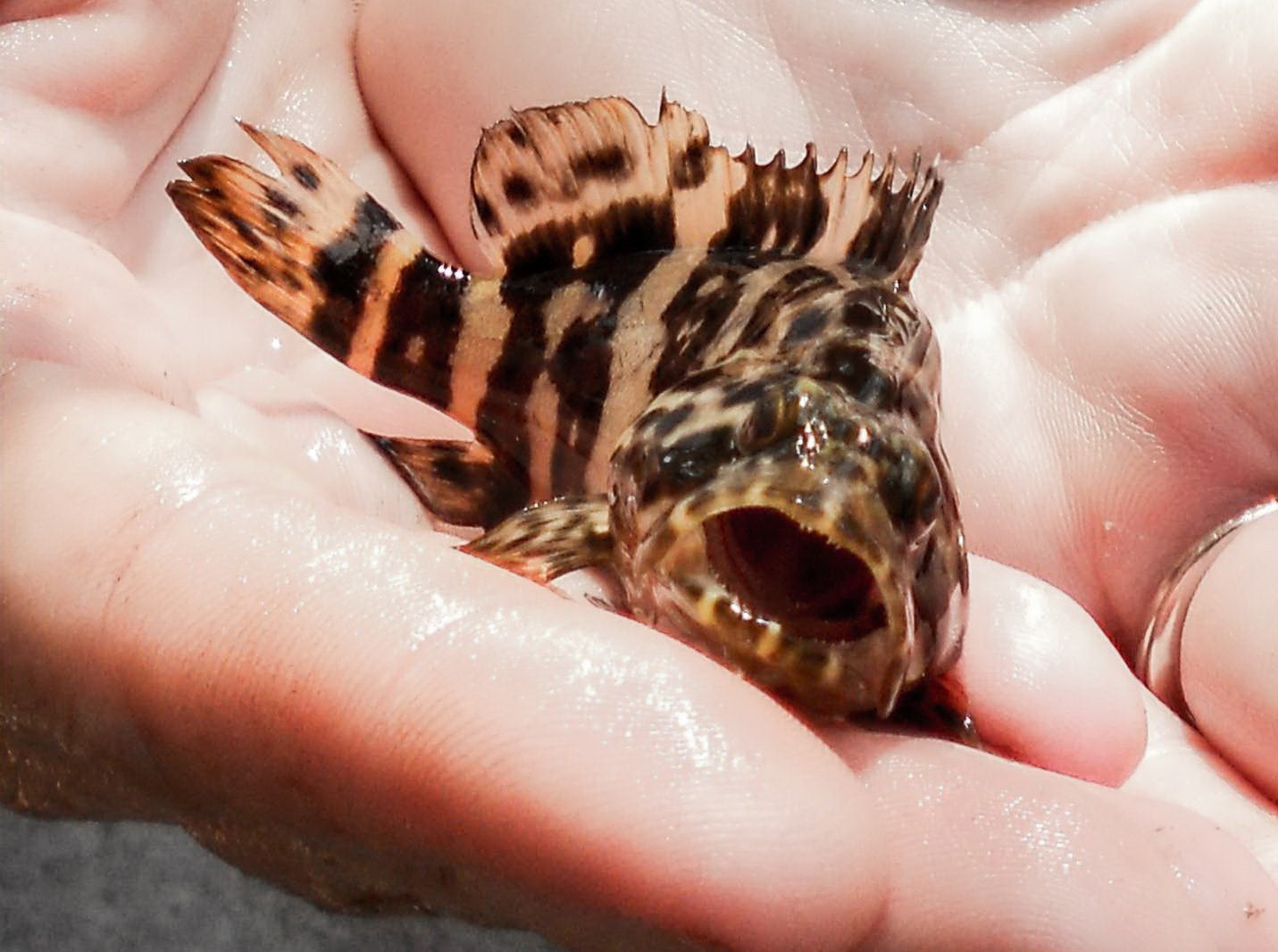 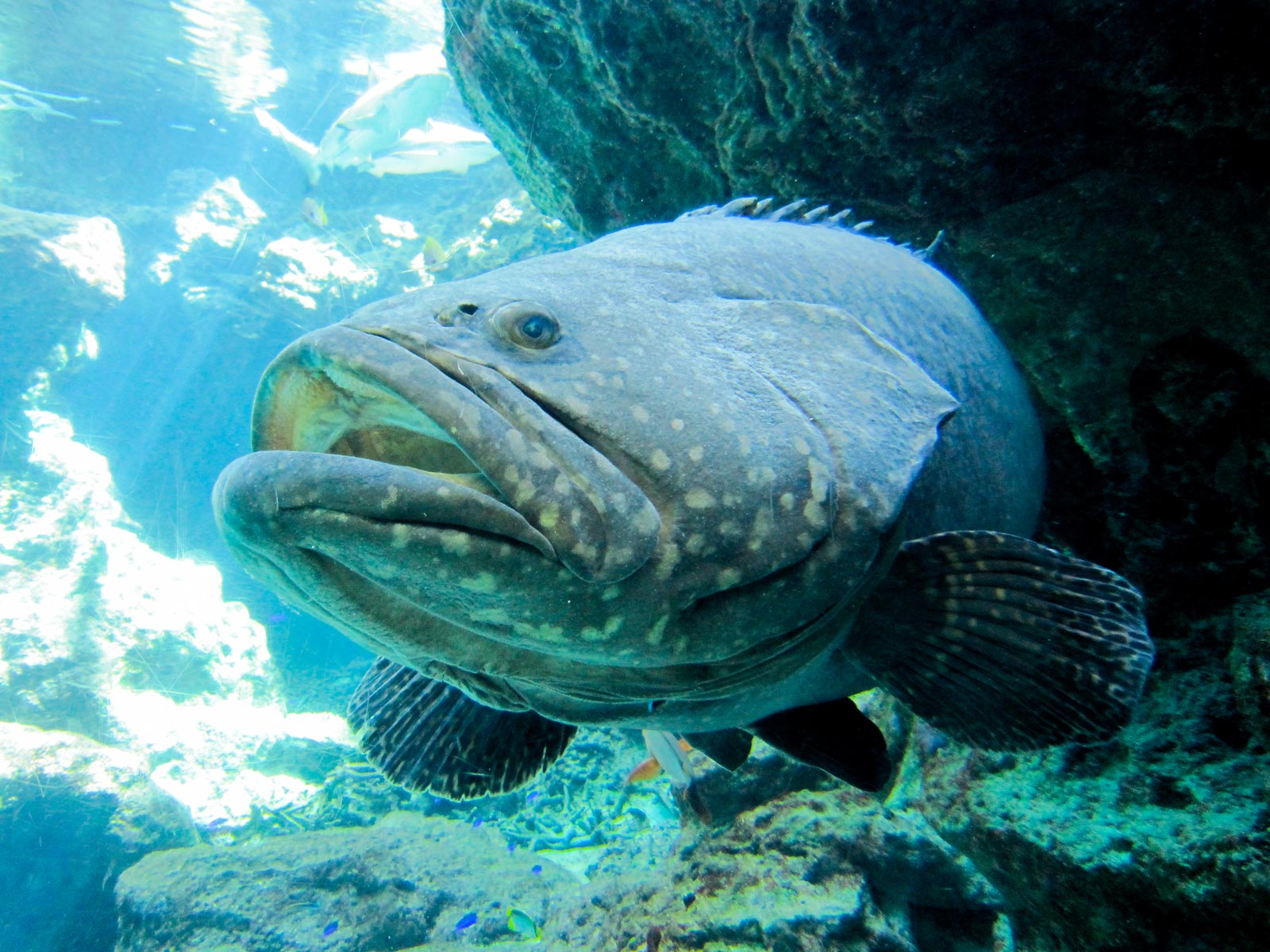 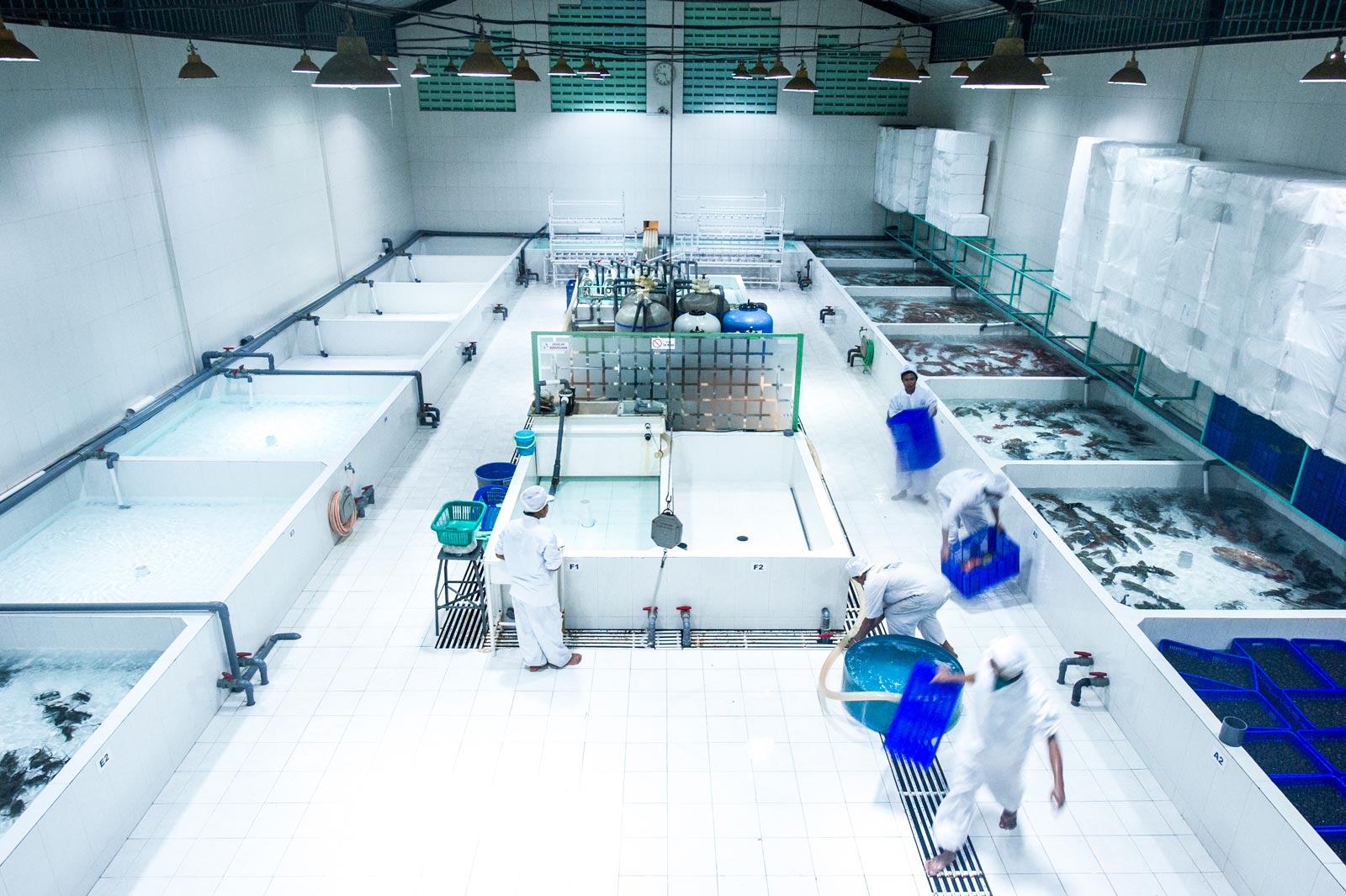 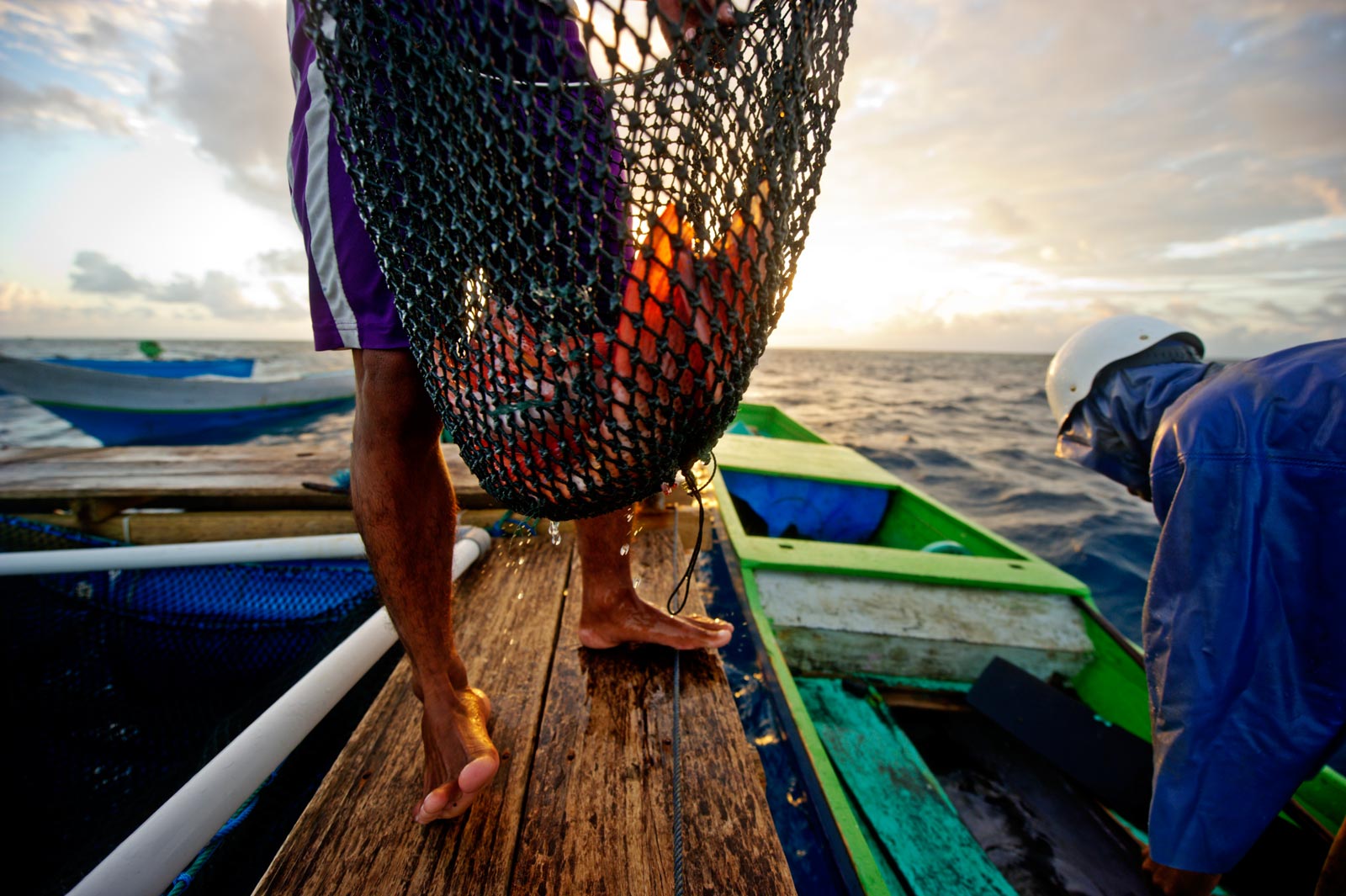 The fishes are collected in floating cages with cooperatives of fishermen delivering them and a boat picks up. Photo: James Morgan 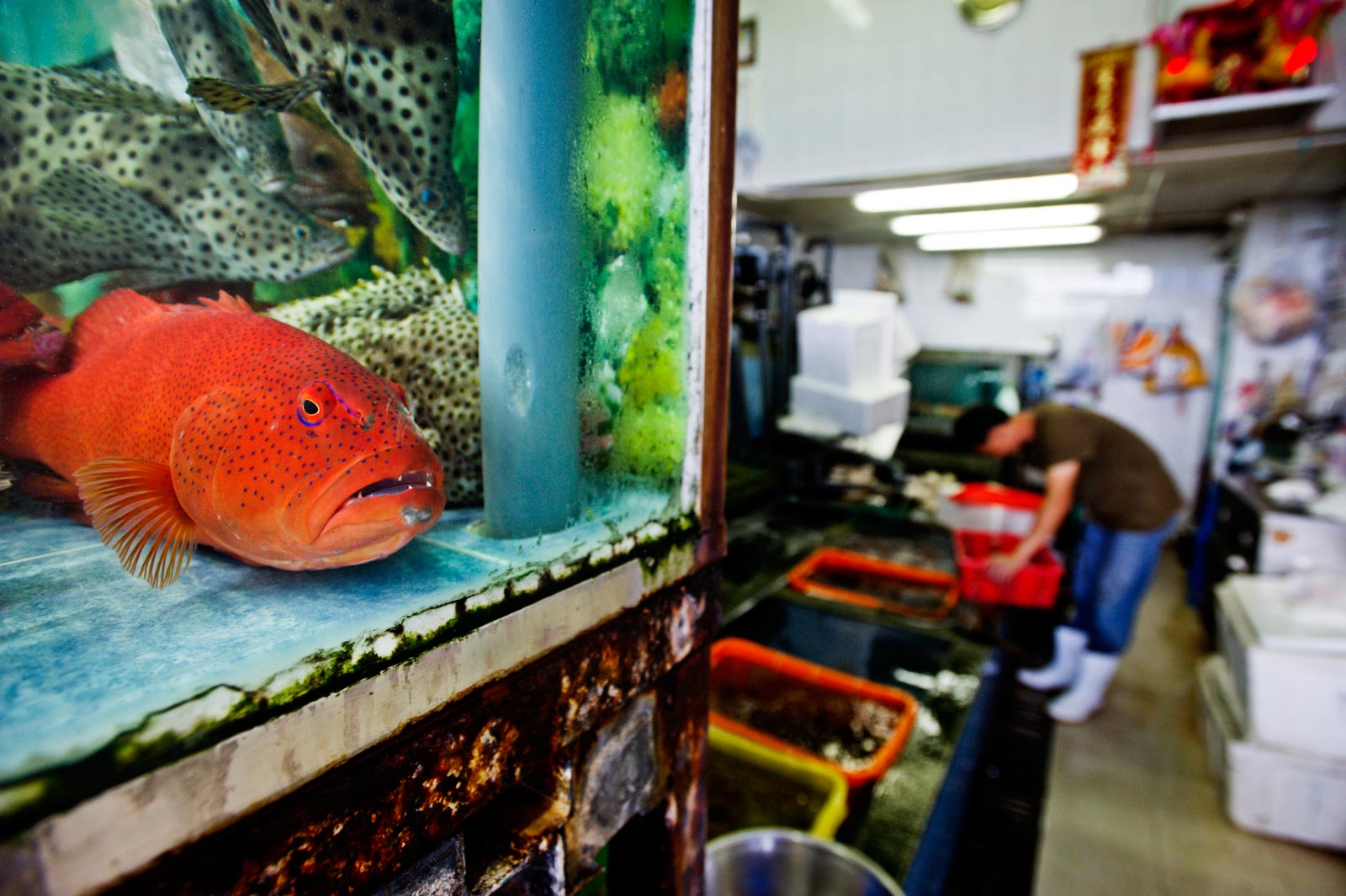 Live grouper are everywhere in mainland china, in restaurant tanks ready to be selected by diners freshly caught as far as they're concerned 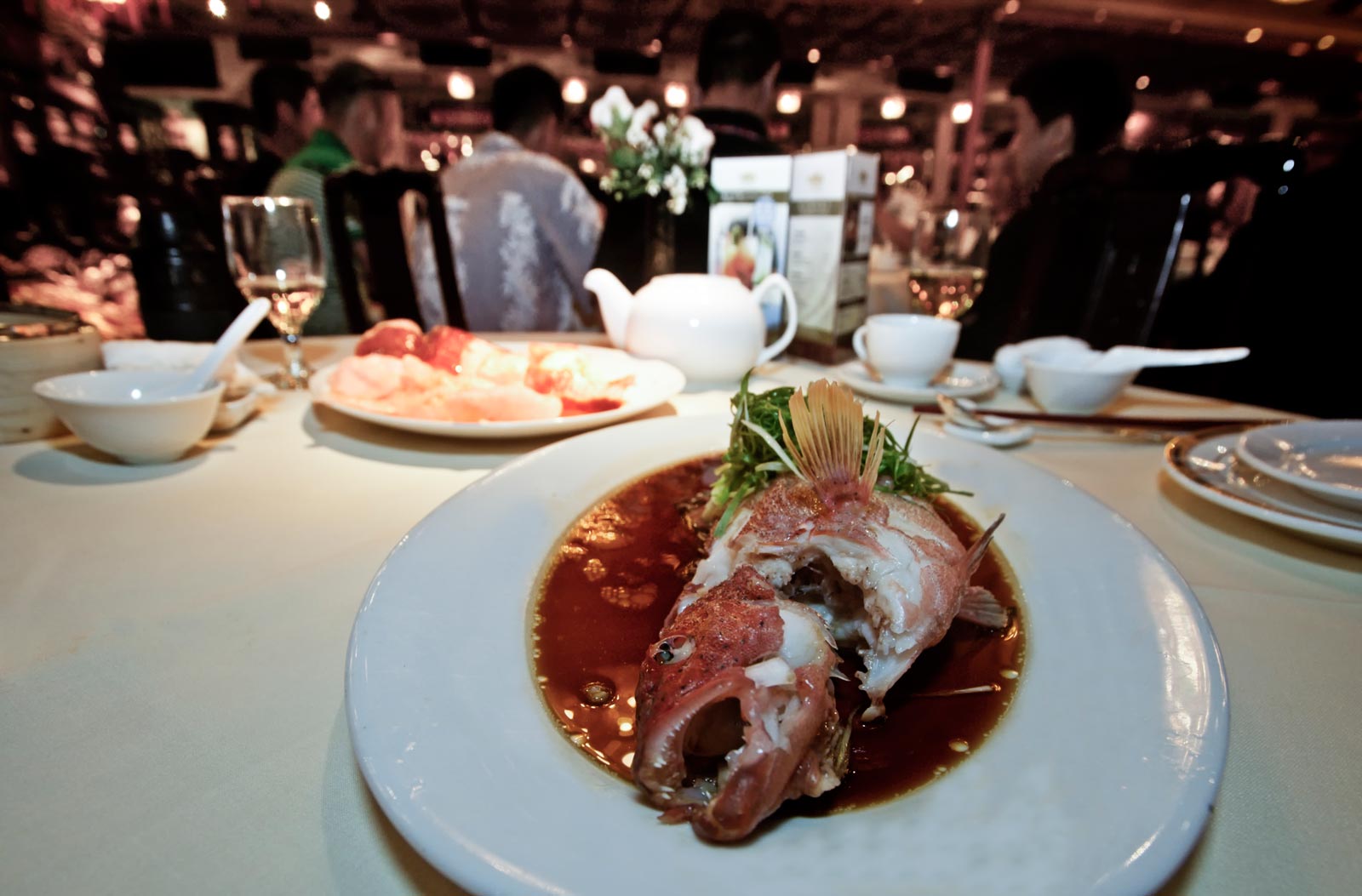 Grouper served at a restaurant in Hong Kong. It's a ubiquitous dish at banquets and formal events, deeply ingrained in the culture. Photo: James Morgan

In the early days, scientists only experimented with cross breeding natural grouper species. But then researchers in Taiwan went a step further. They began breeding hybrids with naturals and then different hybrids with each other. According to Irwin Wong, a live fish trader in Sabah, at last count, there were at least 12 new hybrid grouper variants and research is continuing in what has become a race to create a super grouper.

GM salmon are farmed inland, making escape relatively unlikely.  But grouper are often kept in cages at sea.. “The fact is, hybrids may already have escaped,” says Wong. “If there’s a storm, fish often get free.” His fear is that two hybrids will breed in the wild. “If that happened, the effects on the ecosystem could be devastating.”

Grouper are hermaphrodites – or monandric protogynous hermaphrodites to give them their full title. Early in their growth cycle they are females, but in adulthood they can change into males. No one knows the precise trigger for this transformation, though size, age and environmental factors all play a part. Hybrid groupers in captivity are all female – but in the wild they could easily change sex, according to Wong. Which brings up the possibility of a sort of “X-Grouper” wreaking havoc with the food chain.

The current scientific consensus is that hybrid grouper are infertile – but since their reproductive cycle is still not fully understood, this is far from fact. At an Intergovernmental Forum of the six Coral Triangle countries in early 2013, experts agreed that “the hybridization of grouper has reached an alarming level, that escapes pose an as yet unknown risk to local wild populations and that this issue needs to be addressed as a matter of urgency.”

Experts are meeting again to discuss the issue at the world’s first World Coral Reef Conference in Indonesia on 16 May.

The live reef fish for food trade is a notoriously under regulated industry. It’s also highly lucrative - worth as much as US$1 billion annually. But consumption tends to follow a boom and bust cycle. Once the Sabah Grouper became readily available its per kilo value dropped dramatically. “The pursuit of a faster growing hybrid species is understandable, but there is little evidence to suggest patterns of consumer demand truly merit more efforts on hybridisation,” says Muldoon. He believes the industry needs to self-regulate for hybridisation to become viable. More research on both the science and the market for groupers is desperately needed – but criminal elements and an industry wide culture of secrecy makes this difficult.

In the meantime, the possibility of a “Frankenfish” wreaking havoc across reef ecosystems in the Coral Triangle is a real and growing danger.